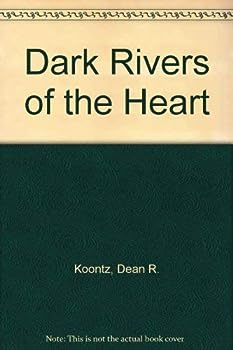 Dark Rivers of the Heart (MM to TR Promotion)

Dark Rivers Of The Heart Do you dare step through the red door? Spencer Grant had no idea what drew him to the bar with the red door. He thought he would just sit down, have a slow beer or two, and talk to a stranger. He couldn't know that it would lead to a narrow escape from a bungalow targeted by a SWAT team. Or that it would leave him a wanted man. Now he is on the run from mysterious and ruthless men. He is in love with a woman he knows next...

Outstanding, frightening, and WAY too real for comfort

Published by Thriftbooks.com User , 15 years ago
This book conjures up far greater horrors than Koontz's usual spate of psychotic killers and fantasy bogeymen. The enemy here is the state, the all-intrusive, all-controlling, faceless accumulation of power and those who seek it, waging a relentless war to own the very lives of the citizens they pretend to protect and serve. The antagonist, Roy Miro, is not some cardboard "evil villian;" he is in fact a highly driven and deeply philosophical creature who fervently believes, deep in his soul, that the state CAN lead us to Utopia and that perfection IS acheivable, and that the greatest threat to mankind is any individual who desires privacy. The inherent abuses of runaway Asset Forefeiture laws are taken to task with a vivid harshness not normally found in your standard political "techno-thriller." Buy this book and put it on your shelf in between Ayn Rand's "Atlas Shrugged" and John Ross's "Unintended Consequences." Then invest in some quality cryptography, give serious thought to obtaining a firearm if you don't already own one, and, oh yeah, and stop giving out your social security number to every self-important Federal twit who demands it!

This time, Koontz nails it

Published by Thriftbooks.com User , 17 years ago
Okay, confession time: I've been a bit hard on Dean Koontz in some of my other reviews. The downside of being able to write good suspense is that your fans get their hopes up, and then you've got a lot of expectations to live up to.With respect to _Dark Rivers of the Heart_, though, it's simply not an issue. This novel is dynamite (and a rare exception to the general rule that Koontz's best books tend to be found among the ones with the single-word titles). It's not only one of his most riveting "chase" novels, but also a cautionary tale about creeping fascism that sadly couldn't be more relevant -- even a decade after its release.Some will assume that Koontz has concocted an exaggerated scenario in Chapter Twelve, in which an innocent local cop is framed by a psychotic federal agent. Surely the government can't confiscate your house and your bank accounts merely by implying that you're involved with drugs, without convicting you of (or even charging you with) a crime. Can it?Yes. It can. It happens all the time. All you need to do is to make the wrong enemies (or own the wrong land, as millionaire Donald Scott found out just before he was shot to death in a bogus drug raid). Koontz has done his homework, and he has used the power of popular fiction to expose open secrets that are simply too scary for most of us -- whether we're liberal or conservative -- to think about. Bravo.The Orlando Sentinel writes: "As it appears, George Orwell was ten years late, and it is left to Dean Koontz to add the finishing touches to an Orwellian future that is here and now. One of his best novels." While I'm not yet prepared to place Koontz in the same class as Orwell, there is obvious synchronicity. Hear them both now, or believe them both later.Pheasants and dragons!

Without at doubt, my favorite Koontz book.

Published by Thriftbooks.com User , 18 years ago
Some people make it a point to read the "Lord of the Rings" trilogy once a year. I read this. Simply put, this is the best book I have ever read. It quickly drops you into the action, but leaves enough hidden to make you guess all the way through the book. I loved the character development between the main character and his dog, as well of course the supporting cast. I did think that one of the most interesting aspects of this book was in that the hero and his nemesis never did meet once through the entire book until the end. This is the type of thing that Koontz (and everyone else) traditionally prefers to stay away from, feeling that there needs to be interaction in order to build suspense.I can't recommend this book enough, and would highly recommend giving it a look.

Published by Thriftbooks.com User , 21 years ago
Hmmm, reading through some of the reviews, I'm surprised at what people have had to say about Koontz and his writing. Sure, he's not for everybody, but he still has talent, and there are few writers that draw me in quite as completely as he does. Okay, enough of my ranting. I think Rivers is one of his better works. The characters achieve a greater depth than some in previous work, the flashbacks are well done, the government conspiracy is handled very well. Dean admits that the hacking in the book is not accurate, in a disclaimer at the end of the book, he says he shortened a lot of procedure for the sake of readability. Some of you are already complaining about the length...would you like him to add the detail back in so you have your accuracy and the rest of us end up bored silly? I would definitely recommend Dark Rivers to anyone who likes suspense or conspiracy stories. There's enough in here to keep you wondering for a while, and quite a few very unexpected surprises thrown in. (Just wait 'til you meet Godzilla!) While I wouldn't put Rivers in my top 5 Koontz novels of all time, it's pretty close, at least in the top 10.

The Koontz formula at its best

Published by Thriftbooks.com User , 21 years ago
Here's the typical Dean Koontz novel*: (1) an emotionally tortured, often widowed ex-military or ex-law enforcement guy (2) meets an equally emotionally damaged, often divorced or widowed woman (3) who together encounter Something Unusual (could be teleportation, alien encounters, time travel, or genetically engineered animals), and (4) in the course of understanding/unraveling the Something Unusual, heal each other.The two best variations on this formula are "Watchers" and "Dark Rivers of the Heart." To give away the Something Unusual here would take away too much fun, but suffice it to say that there's a psychotic government (?) assassin running loose with a license to kill, more or less.What distinguishes "Dark Rivers" is that the paranoid atmosphere Koontz generates is palpable, and exists even when you are reading chapters devoted to the assassin. Second, Koontz's writing really shines at parts; the first chapter -- go ahead, read it -- resonates with emotional depth; you really feel the loneliness and desperate hope of the hero. The sequence set in Utah with the assassin's ruminations on how to fit in with the Mormon police officers is unexpectedly (but no doubt intentionally) funny.While the book is not as explicitly violent as some of his other works ("Phantoms" and "Hideaway" come to mind), there are some disturbingly nasty scenes, particularly near the conclusion, so readers with weak stomachs should proceed cautiously.* Admittedly, the Moonlight Bay novels ("Fear Nothing" and "Seize the Night") have diverged a bit from this.
Copyright © 2020 Thriftbooks.com Terms of Use | Privacy Policy | Do Not Sell My Personal Information | Accessibility Statement
ThriftBooks® and the ThriftBooks® logo are registered trademarks of Thrift Books Global, LLC