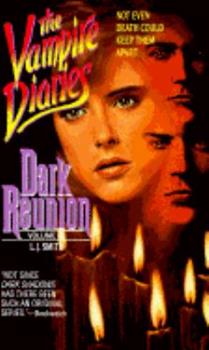 The Final Conflict...The Last Deadly Kiss Elena Now she rises from the dead to recreate the powerful vampire trio. Stefan Summoned by Elena, he keeps a promise to her and fights the most terrifying evil he's ever faced. Damon Joining the brother he once called enemy, Damon battles this new horror with strength, cunning, and deadly charm.

Accomplished Excellence in the Darkness

Published by Thriftbooks.com User , 20 years ago
This series has been one of the best, or rather, THE best, series I have ever read. Picking up Book 1, I began reading and after Elena said, looking at herself in the mirror, "...good enough to eat!" then walked outside and it was described that a crow was looking at her with the same tone as other boys do when they are undressing her with their eyes, I thought, 'Ugh, this is way to corny for me, why did I ever buy this book-I mean, 'good enough to eat' and a crow checking some girl out?!, but I kept reading, figuring it'd be a waste of money if I didn't. And I am SO glad I did. If you have just started reading it and feel the same way I felt, KEEP READING! I found myself absorbed into the books until past 4 in the morning on most nights! By book 4, I had become obssessed with the characters and cried along with them when life was unfair and cried with joy when miracles happened. This is the first series that I have ever related with the characters so much. Meredith- always rational; I respected her because of her ability to think cool in tough situations. Matt- faithful and understanding, he always came through even though he himself wasn't feeling well. Bonnie- the smallest girl with the most courage and biggest heart. When it came down to it, she didn't hold back and risked everything. Damon- always with that whimsical smile and those unfathomable eyes, never letting anyone get too close emotionally with him. I respected him and yet felt sorry because I wished the mystery about him would've been investigated more, but it didn't matter that much because I understood where he was coming from; it wasn't a mystery to me. Stefan- I shared a lot of Stefan's pain, understanding why he blamed himself for everything. He was a vampire who was hurting so much inside yet still could love, and fight for his passions. Elena- the light in darkness, the source of most emotion. When something happened to her, I felt as if it happened to my closest friend or even me, and grieved so much. The series was a roller coaster for Elena, and I felt it extremely. Happiness, Love, Pain, Anger, Confusion....there were too many emotions to name, or even give names for. After Book 4, you will be aching for more even though you feel like you have gone through so much. If LJ Smith ever wanted to continue this series, I am POSITIVE she would have the readers to keep it a success. It was an absolute Masterpiece. Life may be unfair, and the most you can do is try or die trying. I will never forget that.

Published by Thriftbooks.com User , 21 years ago
O my gosh this book was so awesome!! I think it is my fav out of this series!! There were parts in this book that just made you want to laugh and others made you want to cry. Seriously though I think there should be a fifth book!! I mean what happened to Damon, and what happened with Elena and Stefan, what happened with Alaric and Meredith, what happened to Bonnie and Matt, and what about Caroline? O yea, and what ever became of Tyler? So many things left undone and unwritten!!! N-e-wayz this series is an awesome read even if your not into vampires you'll get into these books believe me!! So far I have only read 2 of L.J. Smith's series, but I'm not done yet!! Right now she is my favorite author!! Just all the emotion that is tied up in her books is incredible! I can't wait to read on and find out what other things she has come up with!! But L.J.Smith if your reading this please consider a fifth!!

Published by Thriftbooks.com User , 22 years ago
not many people i know have ever heard of L.J. smith or the vampire diaries series i think that they are wonderful books and recomend them to all my friends and anyone i talk to on the internet i found this book to be very mind stimulating and could hardly put the book down as i read deep into the night. I loved all the characters but i exspecially favored Damon even though everyone had their own doubts about him i knew he would come through in the end however i was kinda hopeing that matt would be changed him and merideth would get together and Bonnie would reveal her crush for damon and make him happy after his guilt over Elena. i had really hoped to see Damon get over seeing Elena with Stefan although stefan is the type of guy most girls would dream about and want a relationship with. Damon as the bad boy was my heart throb and i think that his character just needed someone there for him. He could bite me any time. I admire L.J smith alot in her writtings these were a fantastic series and i would love to see more books added to it in the future. anyone who would like to talk to one of this series biggest fans feel free to email me at winter_stagner@yahoo.com

The most wonderful book I have ever read

Published by Thriftbooks.com User , 23 years ago
This was the first trilogy I read from L.J Smith and thats when I felt in love with her books. I also felt in love with Damon. Of all her other bad boys Like Gabriel in Dark visions or Julian in The Forbidden Game, Damon is my favorite. I know he was supposed to be this bitter, dark and dangerous creature but I found him fascinating. He really wasn't evil sure he was a bad boy but he wasn't evil and deep in his heart he love his brother and he did love Elena. I love this book so much. This was also the only book that made conflict over which guy the girl should stay with. I really like Stefan too and I loved Damon and they both love her and they were both so right for her. She also love both men. Althought toward the end I think she made the right decision to stay with Stefan but Damon is someone I will never forget even if he is not real. I do wish he was.

Published by Thriftbooks.com User , 24 years ago
I can't believe nobody has said anything about this book, it was so amazing. I bawl my eyes at the ending everytime I read it. In the end you totally fall in love with Damon, and realize he's not a bad guy. Him and Stefan finally make up, and you realize that they love each other sooooo much. I thought I would die when Stefan calls out Elena's name, I thought my heart was shattering. The only thing is, I wish it hadn't been written through Bonnie. I didn't like the feeling of it, I think I would've preferred it through Meredith, if it had to be anyone besides Elena. But this is a heart wrenching story that will keep you turning the pages right down till the end, and then you'll be looking for even more. I think they should throw Damon and or Stephan into the Night World books, I think it could make it very interesting. They have certainly been around awhile, so why not??? Don't we kinda miss Damon??? He'd be the perfect guy to see meeting his soulmate and succomb to his need for that love. :) Well if you wanna talk email me!
Trustpilot
Copyright © 2022 Thriftbooks.com Terms of Use | Privacy Policy | Do Not Sell My Personal Information | Cookie Preferences | Accessibility Statement
ThriftBooks® and the ThriftBooks® logo are registered trademarks of Thrift Books Global, LLC