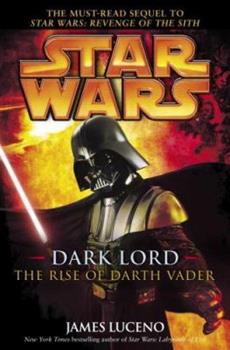 (Book #3 in the Star Wars: The Dark Lord Trilogy Series)

This New York Times bestselling sequel to the film Star Wars: Episode III: Revenge of the Sith opens as Darth Vader is ordered by the emperor to wipe out resistance to the new order.

Published by Thriftbooks.com User , 15 years ago
I generally like to read star wars books that keep to the story originated by Lucas. I'm really not interested in side stories considering there is approximately 20 years between episode 3 and 4 that need to be answered for. Darth Vader has always been my favorite character in the star wars universe. I was happy to see a book devoted more or less about him. Now on to the book, the book picks up right after episode three which was a good thing, instead of trying to make s*** up. The book reads like it could be a plausible connection to Revenge of the Sith. Though I do believe that Vader was made out to be weaker than he should have of been. But hey it's Luceno's point of view which was good, But I would have went a different route myself. Being that in the movies Darth Vader is not given weaknesses or limitations. He is the chosen one. But in the book he does some pretty cool stuff that is not in the movies, so it kind of gave a new take on his powers being that he confined to a life preservation suit. But as I said the book is an easy read and will be enjoyed by star wars fans as well as hard core Darth Vadar fans like my self. Being that I was in the theater for the original star wars. I do hope to see more books written on Darth Vadar's continued rise to power within the empire and the continued destruction of the Jedi order, since unknown Jedi may have survived. Since it was mentioned by General what's his name in the star wars episode 4 that Vadar was all that was left of that ancient religion or order, but you get the point. So buy the book and enjoy.

Published by Thriftbooks.com User , 15 years ago
The catch-phrase at the top of the book reads "The must-read sequel to Star Wars: Revenge of the Sith", and I couldn't agree more. This book is phenomenal. Luceno has maintained the integrity of Lucas's vison while adding wonderful new dimensions. For instance, it is very interesting (and rather touching) to see Anakin/Vader struggling with his new "life". And indeed, as he himself points out, it isn't "living" at all, imprisoned as he is in his new body armor. "This was solitary confinement. Prison of the worst sort. Continual torture. He was nothing more than wreckage. Power without clear purpose . . . " We see him dealing with anguish and depression - his humanity, if you will, something much different from the "purely evil" character we see in Episodes 4,5, and 6. There is one scene where he has the helmet off, and he is sitting in the medical quarters, complaining to Palpatine/Sidious. His shoulders are hunched, he is wallowing in a flood of pity and self-doubt, and the fact that you can imagine it being the voice of Anakin talking rather than the deep, mechanical bass of Vader makes it all the more heart-wrenching. The Chosen One has truly fallen. And thus begins the rise of the Dark Lord - for this becomes the source of his ever-growing power. Power WITH a purpose. Power for the sake of power. His new life. Not only does he begin to live in his suit adequately; he absolutely excels at it. Under the guidance (and manipulation) of Sidious, his strength grows exponentially - he uses his anger and depression as a true focal point, and we see him simply overpowering everything and everyone. Save, for the Emperor. Here, then, lies the crux of their relationship. Vader admits to Sidious that he needs him - for a time, "because you are my path to power, Master." A quote from the ancient Sith Lord, Darth Bane, almost eerily echoes those of Master Yoda in The Phantom Menace: "Two there should be; no more, no less. One to embody power, the other to crave it." Neither Sidious's desire to find the secret to immortality, nor Vader's ultimate desire to overthrow Sidious, have waned in this story - indeed, those two desires are what drive these two Sith onward. And, of course, as we all know, fellow Star Wars fans, this all comes full circle at the end of the original trilogy. Anakin IS the Chosen One. He DOES defeat the Sith. He DOES bring balance back to the Force. And that's exactly what I loved about the movies - the story and the sagacious (rather Buddhist) wisdom permeating throughout. I didn't watch the original three over a hundred times each because of the space battles or the lightsaber duels. I watched them for the story - the spirituality. That cyclical (yin-yang) nature of duality - in other words, balance occurs with both light AND dark. The Fall and Redemption. The idea that there is no absolute good or absolute evil. George Lucas was a master (pardon the pun). And this book continues the tradition quite

Rise of the Most Intriguing Villian in Fiction

Published by Thriftbooks.com User , 15 years ago
James Luceno's brilliant sequel to Revenge of the Sith manages to not only complete the saga of Anakin's descent into Darth Vader, but create a dynamic, moving portrait of loss and acceptance in a galaxy turned suddenly upside down. Jedi Knight, Roan Shryne, has all but abandoned his faith in the Force in the wake of the tragic events of Order 66. He finds little solace in his companion, a plucky young Padawan who has grand plans of saving the remnant of Jedi. En route, he discovers something even more disturbing, a chance to give up life as a Jedi and start over as an ordinary man. Darth Vader is also undergoing a crisis of faith, unable to move on past the deceit and betrayal of his masters (both Obi Wan and Sidious) and to forge for himself a reason for being other than as yet another pawn for Palpy. But the dark plans of Sidious have only just begun as the Sith Lord prods and pushes Vader into situations that will trigger the chrsalysis of rage, a pathway to the true power of the dark side. His machinations will team Vader up with the newest emergent power, an Imperial Moff, who's overarching designs will mean the enslavement of a nation and the means of fueling life into the Empire's emerging superweapon, the Death Star. Luceno builds a story filled with pathos, horror and intriguing insights into the minds of Darths Vader and Sidious. Numerous long-standing questions are answered along the way as we're enmeshed in the moral dilemma of a galaxy that's lost its way: a Clone Commando who will not obey Order 66, a politician who risks all to secretly undermine the Empire, a young Padawan that learns -- too late -- the price of blind obedience to duty, a race of fierce beings who will fight at all costs a losing battle against tyranny, and the former Chosen One who learns that he needs the Jedi still to grow into the agent of evil he's chosen to become.

Darth Vader : year one:..the rise of a dark lord of the sith ..the circle is now complete

Published by Thriftbooks.com User , 15 years ago
first off ive been waiting for months for this book and when i got it home i was really impressed:) james luceno does it again a surefire hit..this book is not for the casual star wars fan though keep this in mind.. if you saw revenge of the sith(and who hasnt?) this book fills up some of the story gaps quite nicely way better than the expanded universe books can do... ok first off ..this book im my views is darth vader year one..because we know how anakin fell to the dark side in rots..he did it out of love for padme...hence the tragic fallen hero story arc..beauty and love can make anybody weak. this book shows how anakin is dealing with his choice in turning to the dark side and his dealing with life in the new armor..he has memories that go back to the epic duel on mustafar with obi wan kenobi..his thoughts of padme..his secret that he saw through palpatine's thoughts etc and had ideas to overthrow him but why he cant we also learn how obi wan kenobi finds out about darth vader/anakin still being alive and his reactions of him in the new menacing armor..we also learn how the wookies are enslaved which was a good read as well..we learn more about the relationship between tarkin /palpatine/and vader... but i find in this book the most interesting is the way it shows how vader becomes palpatines right hand man and how he becomes the ultimate enforcer of the new empire(there are some parts where does a number on some of his former jedi masters)..we see how he tracks down his fellow jedi..remember that order 66 has been given so this story also takes place near the end of the clone wars/rise of the empire..not everybody has heard about the birth of the empire..but they will..thanks to vader and his jedi purge which is one of vaders first assignments.. the book also shows how yoda and other characters are starting to deal with the new order..but not everybody is on the side of the empire(the birth of the rebellion is still growing in secret) theres lots more to tell but im not giving it away ! if you are are a fan of star wars..or darth vader. you must pick this book up..its a great read..
Copyright © 2020 Thriftbooks.com Terms of Use | Privacy Policy | Do Not Sell My Personal Information | Accessibility Statement
ThriftBooks® and the ThriftBooks® logo are registered trademarks of Thrift Books Global, LLC