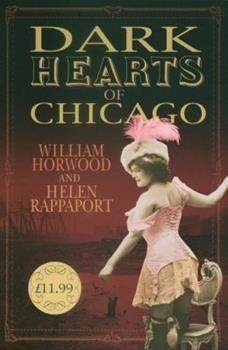 by William Horwood and Helen Rappaport

This description may be from another edition of this product. This dark and exciting historical novel marks the collaborative debut of two remarkable talents, the novelist William Horwood and historian Helen Rappaport.When young, inexperienced but very ambitious...

Published by Thriftbooks.com User , 12 years ago
I bought this book because of William Horwood. Books like the Stonor Eagles, or the Skallagrigg, are utterly special experiences and I will look for him regularly to see whether he will lead me into new places, either of emotion or of adventure, with a new tale. This is totally different from any work I have read from him, but excellent. The setting is very real, Chicago in 1893 is well told, I can imagine it from the short and vivid descriptions. I hate too much telling of places and smells and flowers and shapes, but the way it is handled here is very well done, short and yet I could really feel where we were. The short chapters are simply told, very stark, nearly just facts, and still, the tension mounts, the various strands flow together, the resolution develops step by step. Soon, I could not stop reading because the mystery that was being unveiled, the small and big cogs coming together was so gripping. The persons were well drawn, I could get involved with them emotionally, although there is a bit of distance, somehow, as if I were also a journalist following a story. There is no comparison with the deeply emotional tales Horwood has written before, where faith and feelings and inner callings were so very important. The partially horrific settings (madhouse, slums) are not overdone, I was frightened at moments that there might be too much horror, but it was always just enough for the story, no violence for violence's sake, and no obsession with the sick minds of some of the characters. Again, just enough to be vivid and to make the story very very clear, also in its darkness. Finally, the telling from the women's point of view was a bonus. Not only did the women seem real for the time (no 21st century heroines put by chance in a long skirt), but to see the limitations and the courage and strength of them, and the first steps towards equality that were taken then, it was a true bonus. Never overwhelmed the story, but gave an extra dimension I enjoyed a lot. I will read anything by these two authors again. I recommend this book to anyone who likes a good mystery, who likes a well done realistic historical setting, and who still wants to be very well entertained.
Copyright © 2020 Thriftbooks.com Terms of Use | Privacy Policy | Do Not Sell My Personal Information | Accessibility Statement
ThriftBooks® and the ThriftBooks® logo are registered trademarks of Thrift Books Global, LLC