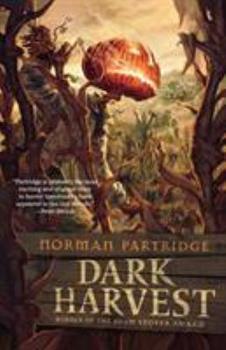 Soon to be a major motion picture! Norman Partridge's Bram Stoker Award-winning novel, Dark Harvest, is a powerhouse thrill-ride with all the resonance of Shirley Jackson's The Lottery.Halloween, 1963. They call him the October Boy, or Ol' Hacksaw Face, or Sawtooth Jack. Whatever the name, everybody in this small Midwestern town knows who he is. How he rises from the cornfields every Halloween, a butcher knife in his hand, and makes his way toward...

Published by Thriftbooks.com User , 14 years ago
This is one book that if you buy it for the cover, you won't be disappointed when you flip through page after page and find you can't put it down. I personally love all Autumn/October/Halloween type stories. I am collector of small-press horror and fantasy books and I found Dark Harvest as a limited edition from Cemetery Dance press - it's a nice little hardcover, signed and numbered, and smells just like a great book should. Anyway, it's more of a novella I think, and that's the only downside to it - the characters are full and believable, but you can tell that if he had another 100 pages we could have something much richer and more satisfying. I think what he does with this form is great though, and the sheer number of interesting viewpoints he works through is amazing considering the book's length. It moves along very quickly, yet he still makes time for subtlety and small character traits to reveal themselves little-by-little. This isn't a really 'scary' book per se, but it does belong in the dark fantasy/horror realm and it hits the spot. It reminds me of The Drive-In by Joe Lansdale in its pace, storytelling style, and characterization - in other words, it's a fun read. Check it out!

Published by Thriftbooks.com User , 14 years ago
I don't seem to review a novel unless I can give it five stars. I'm happy to show up with those stars for this one. This novel was harder than some for me to get absorbed in, but I got over that quickly enough. The viewpoint, especially early on, doesn't reveal much of the characters. Usually I need that character connection, but the story and atmosphere provide the initial pull for this novel. The initial characters are, in fact, left behind. A risky move, but I kept going, fascinated with the story and the atmosphere and the great writing. Then I was introduced to characters who were well developed, and I was really hooked. I felt this novel was the right length for the style, although I see others disagree. The present tense is so immediate, I might get tired of it if it went on too long. The author made great use of it, in my opinion. I couldn't stop reading. It helped knowing I'd be able to finish without devoting days to reading. I could do without the involvement of the reader by dropping into second person periodically throughout the novel. Being told I'd been in these shoes and understood the situation didn't add anything to me, but the segments were short and weren't a big drawback to me, either. Also, if you need everything to make sense in the world as we know it, this might not be your best pick. There are unanswered questions a'plenty, but that aspect didn't bother me. The opening dumped me into a fast-moving, atmospheric story in a way that I had to leave behind the rationale of the real world right off, so I was ready and willing to continue doing so as I read on. That's part of the fun of many good horror stories. At least it's part of my fun. I am happy to give this novel five stars. I really enjoyed the writing and losing myself in the story. I'll look for this author again.

Published by Thriftbooks.com User , 14 years ago
It's a premise that's seen play before. Old rituals still hold sway in nameless towns around the borders of our modern world. Yet Norman Partridge takes this premise and spins it in circles, creating a story that maintains the atmospheric feel of all these wonderful tales while taking on a distinct life and character of its own. Partridge see-saws back and forth from character to character and an omniscient narrator that involves the reader intimately in the story. It's the kind of risk that could fail miserably, yet that works out perfectly in this case, beautifully setting the scene and building up the atmosphere. The story itself is a fascinating skein that weaves threads of such writers as Bradbury yet tells its own tale. The twists and turns the story takes are Partridge's own, and are ultimately what make it such an enjoyable read. The book goes quickly---I read it in the space of a morning---and its story sticks with you. While Pete knows a few things about the October Boy and the ritual surrounding him, he doesn't know everything, and the secrets he's about to uncover will change the nature of the game for him in some potentially devastating ways. My one reservation regards the manner in which he pieces together some of these secrets. There's a character that joins him along the way that's half plot-device. Partridge gives her a personality with depth and character, but in order to be more than a plot device she'd really have to show up earlier and be a bit more involved. However, this a minor and easily forgivable slip.

Dark Night of the Scarecrow

Published by Thriftbooks.com User , 14 years ago
I have been anxious to read Norman Partridge for some time now, and DARK HARVEST was a great introduction to the author. This book takes no prisoners and will punch your ticket from the get-go. As the reader, you get the impression from the book description that you're going to be set for a rather typical good vs. evil, boy vs. monster plot scenario. But what Partridge delivers is so much more and so much different than your average horror novel. This is the tale of the scarecrow creature known as the October Boy. Upon his resurrection each Halloween, the small town's teenage boys compete for the honor of being the first one to destroy old Sawtooth Jack. Because if a boy is crowned the winner of the "Run", it's his ticket out of town. In fact, it's the only way anyone ever escapes the cornfields and the never ending nothingness of this particular midwest 'burg. Pete McCormick is 16 years old, and he is determined to be this year's winner of the Run. He wants out of town, and the only way to get his wish is to stop the October Boy from making it to the town square church before midnight. However, Partridge's trick along the way is a clever story twist to keep the reader guessing about who the victims really are and who the monsters really are. What is the history behind this macabre tradition that has the farm folk running rabid every Halloween night? Partridge does a wonderful job of setting you up for one type of story, then stopping you in your tracks, and finally putting his own unique spin on the plot flow to really keep you guessing. His pacing and prose are both switch-blade sharp and will take you for a ride like few other authors can. When I read DARK HARVEST, it reminded me of another novel by Joe R. Lansdale called THE NIGHTRUNNERS, which is also measured by hard hitting action and violent characters. In addition, I see some parallels with Partridge and author Charlie Huston. Material by all of these writers is actually some of the best dark fantasy and pulp noir to be found anywhere today. As for the title of this review, it's really a nod to another October Boy, the mysterious scarecrow character from the early 1970's TV movie, DARK NIGHT OF THE SCARECROW. The networks used to run it every fall, but I haven't seen it listed for many years now. It is still one of the best horror films ever to be offered by TV producers. Like the original NIGHT STALKER, this movie is very much in the same vein as the projects of Dan Curtis. I'm still waiting for someone to release it on DVD. In the meantime, read DARK HARVEST for an original Halloween treat. Almost as good as a carmeled apple or a popcorn ball......

You Know The Town...

Published by Thriftbooks.com User , 15 years ago
Many years ago, I read a story called "Johnny Halloween" in Cemetery Dance magazine. It was a stark, hard boiled, noirish horror story set around Halloween. Look it up if you can find it. It cemented Partridge in my mind as one of the best horror writers out there. Ten years ago, his novel "Slippin' Into Darkness" hit another home run with its vivid descriptions of flawed characters that you might not have really liked but still cared for in a weird, voyeristic way. It was also pretty stark, and very well told. After that, I lost track of him. Now, I'll be looking up everything he's published between then and now, because "Dark Harvest" is one of the best Halloween books you'll read this year (or any other.) Released in a signed limited edition as part of Cemetery Dance's 2006 Halloween line, "Dark Harvest" has been chosen by Publisher's Weekly as one of the year's best. How rare is it that a small press book gets this kind of recognition? Read it, and you'll find out why. Partridge has created sympathetic characters that could very well be people you know. The story centers around a small town with secrets that has a Halloween ritual every year where the teenage boys are locked in their rooms without food for five days and unleashed in the town on Halloween night with the mission to find and kill the October Boy. The person who kills him will be given a free ride out of the city and his parents will be rewarded by the town. Every year this plays out, every year another winner. As the secrets of the town and the origin of the October Boy are revealed, it is appearant that nothing in this place is what it seems. A young boy and girl figure this out, and do what they can to escape. The book is short, but Partridge tells you everything you need to know. He will shock you, leave you spellbound, leave you riveted to the page wanting to know what happens next. I read it in two sittings and wanted more when I finished even though I was fully satisfied by the ending. This would make a great horror movie... His style is sparse and fast paced, imagine Robert B. Parker writing horror. This book was released alongside Al Sarrantonio's great novella "The Baby." I would also recommend "The Pumpkin Boy" by Sarrantonio for another similar Halloween tale. As far as similar hard boiled horror styles go, I would recommend "Slob" by Rex Miller and "After the Paperman Comes" by Heywood Steele.
Trustpilot
Copyright © 2022 Thriftbooks.com Terms of Use | Privacy Policy | Do Not Sell or Share My Personal Information | Accessibility Statement
ThriftBooks® and the ThriftBooks® logo are registered trademarks of Thrift Books Global, LLC