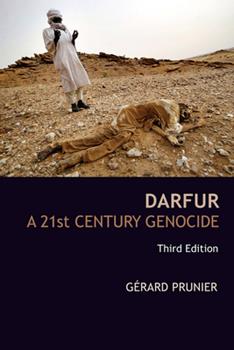 In mid-2004 the Darfur crisis in Western Sudan forced itself onto the center stage of world affairs. Arab Janjaweed militias, who support the Khartoum government, have engaged in a campaign of violence against the residents of Western Sudan. A formerly obscure tribal conflict in the heart of Africa has escalated into the first genocide of the twenty-first century. In sharp contrast to official reaction to the Rwandan massacres, U.S. Secretary of State...

Published by Thriftbooks.com User , 14 years ago
Very precise, very clear book. And necessary for anyone who wants to try to understand something about Darfur - yesterday, today, and, perhaps, tomorrow.

Published by Thriftbooks.com User , 14 years ago
If you will read just one book about Darfur, I can't imagine a better choice. Nothing else I've read so deftly sorts through Darfur's complex history, making clear how geographic, economic, social and political strands of the region's past made it vulnerable to the crimes perpetrated there. Prunier takes a seemingly incomprehensible story and makes it almost perfectly comprehensible. Prunier shatters all the myths and cliches that pervade media accounts of the conflict and so vex critical thinkers, who know that it can't be that simple- that there is more and at the same time, less to the story. His analysis of the Sudan's history is concise, compelling and dead on. Moreover, though the North-South war which raged for over 40 years is not the book's focus, he brilliantly analyzes how that struggle relates directly to Darfur. Chillingly, he explains how, for the Khartoum government, its actions ( and inactions ) in Darfur are perfectly logical and, from their perspective, quite effective. As one reads Prunier, he can imagine how readers years ago must have been sickened and yet, oddly "reassured "( I can't find the right word ) when they realized that the Holocaust was explainable. I say this not to compare Darfur to the Holocaust. Prunier doesn't do that either. What I refer to is the provision of explanation for events so mind-bogglingly horrible that one wants to grasp the causes, yet fears that this can't be done. If you are compelled to understand the historical roots of this horror, order Prunier now.

Published by Thriftbooks.com User , 15 years ago
For those familiar with Darfur only through George Clooney's media-savvy pleading to raise awareness of the genocide occurring there, Gérard Prunier's incisive, often scathing examination of the volatile political situation in this western Sudanese province provides quite a bracing, fascinating education. A French ethnographer and respected expert on East Africa, he brings together surprising facts about the war-torn area and the evasive actions taken by the National Islamic Front (NIF) government in Sudan's capital, Khartoum. The scope of the conflict is shocking - an estimated 400,000 deaths and 2.5 million displaced since it started in February 2003. But Prunier gets beyond the figures to paint a community so burdened by its own intertribal complexities that it maintains an unfortunate separateness from the rest of the country. He points out not only the passive actions emanating from Khartoum, but also how Darfur has fed into its own sovereignty by looking west toward the Sahel for its resources rather than the rest of Sudan. The author does not hold back on his harsh criticisms of the NIF government which he sees as intentionally encouraging Darfur's ethic polarization between the Janjaweed and the non-Baggara people in order to maintain control over the area. Intriguingly, he sees the burgeoning racial politics as the result of increasing Arab influences in Khartoum since the official administrative perspective is blatantly insensitive to the traditional tribal cleavages in Darfur. These divisions are what lie at the heart of the atrocities in Darfur since they have ramifications on the economic and military situation, which began when the Sudan Liberation Army took up arms in 2002. The NIF unleashed militias to deal with the problem, but political infighting in Khartoum vetoed any acts of outright repression. This ongoing stand-off has caused up to one-half of Darfur's population to be driven into camps for internally displaced persons (IDPs). In this isolated state, Prunier points out that they are beyond the reach of international food aid, and malnutrition has festered to the point of casualties amounting to an 8% depletion of the population each year. Humanism issues aside, the NIF has no incentive to address the devastation since their top priority is to maintain political supremacy, and from an outsider's perspective, they have managed to convince the rest of the world that they are supporting the Naivasha peace process. Prunier shows that it is ironically this peace process that assures the continued genocide. The UN Security Council has passed resolutions attempting to force the Sudanese government's hand in controlling the spiraling morass in Darfur. However, the UN is hamstrung by its inability to deploy peacekeeping forces in the area, and neither none of the major Western powers have troops available to send in their place. The author effectively shows how the UN has placed a greater priority in bringing a conflict-ridden Sud

Published by Thriftbooks.com User , 16 years ago
Any attempt to provide a political explanation of the Darfur crisis is bound to use the terms "complex", "ambiguous", "deeply rooted" and "obscure", if only to stigmatize over-simplifications and journalistic coverage. Not so with Gerard Prunier's book. In less than 200 pages, he succeeds in providing a thorough account of the crisis' origins, its unfolding, and the world's reaction to it, in a way that will be both appealing to the informed layperson and to the scholar specialized in African politics. His story is the Darfur crisis made simple, not by way of simplification but through rational understanding, in the way that Hannah Arendt had in mind when she evoked the "banality of evil" in the context of the Holocaust, or following Primo Levi's invitation to understand the morally incomprehensible. For Prunier, the complexity of the crisis does not preclude us to formulate an ethical judgment on the perpetrators of the crimes and their political sponsors, or on the foreign onlookers who responded with a mix of willful ignorance and moral posturing. Far from castigating the most egregious misconceptions of the country's politics and history, such as the opposition between "Arabs" and "Africans", he shows that categorizations based on racial profiling are part and parcel of the Sudanese political landscape, where they interact with the ideology of Arabism and the opposition between center and periphery. Although the history of Darfur as an independent Sultanate from the fifteenth century onward is relevant to understand what lies behind the conflict, Prunier shows that the origins of the current crisis are to be found in the mid-1980s, a period when a deadly drought, political infighting, foreign interference, ethnic polarization and the spillover from Chad's civil war transformed this westernmost province of Sudan into a boiling cauldron. In a way, there is nothing "ambiguous" about the genocide, at least if we use the definition of the 1948 UN convention, although the Darfur crisis fails to meet the author's own definition of genocide that he advanced in his previous book on Rwanda. The ambiguity that is mentioned in the title refers rather to the identity of Darfur itself, at the same time close and distant from the political center, and to the response of the international community, which chose to treat a political crisis through a humanitarian angle. As events in Darfur have temporarily receded from the media's attention, reading this book will be essential, not only to understand what has happened, but also to respond to what is to come.

Puts the conflict in it's political and historical context

Published by Thriftbooks.com User , 16 years ago
Prunier wrote "The Rwanda Crisis", which I think is the best analysis of the genocide in Rwanda. When I heard that he had a book on Darfur coming out, I was very eager to read it. I ordered a copy from London because it was published by Hurst & Co. two months before being released in the USA. This book on Darfur is excellent. It is a thorough and scholarly examination of the crisis in Darfur, and he also analyzes the international community's response to it. The writing is dense and difficult, but it's worth it.
Trustpilot
Copyright © 2022 Thriftbooks.com Terms of Use | Privacy Policy | Do Not Sell My Personal Information | Accessibility Statement
ThriftBooks® and the ThriftBooks® logo are registered trademarks of Thrift Books Global, LLC