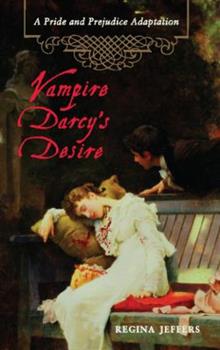 "Vampire Darcy s Desire" presents Jane Austen s "Pride and Prejudice" as a heart-pounding vampire romance filled with passion and danger. Tormented by a 200-year-old curse and his fate as a half-human/half-vampire dhampir, Mr. Darcy vows to live forever alone rather than inflict the horrors of life as a vampire on an innocent wife. But when he comes to Netherfield Park, he meets the captivating Elizabeth Bennet. As a man, Darcy yearns for Elizabeth,...

So much better than Mr.Darcy, Vampyre

Published by Thriftbooks.com User , 11 years ago
If you were among those disappointed in Mr.Darcy, Vampyre you will not be so with this book. I greatly enjoyed it, finding myself unwilling to put it down. I highly recommend this P+P vampire adaptation.

Published by Thriftbooks.com User , 12 years ago
When I saw the title of this book I rolled my eyes, I thought this would be another ridiculous vampire book to add to the "vampire mania" that has been so popular recently. I purchased this book simply because I had read Ms. Jeffers other books and simply loved them. This book was absolutely enjoyable, I love the passion, romance and connection that Darcy and Elizabeth shared from the beginning of the book. I simply could not put this book down, from start to finish it had my attention. Well done Ms. Jeffers, I look forward to your future books with great anticipation.

Published by Thriftbooks.com User , 12 years ago
I was not sure I would want to read this book after reading the disaster known as Mr. Darcy, Vamprye, but I always thought there were several Austen characters who would make good "antagonists" in a paranormal book - Wickham, Willoughby, John Thorpe, Capt. Tilney, etc. What I liked about this one is the way the author keeps the story tied together with the Scottish ballad, making it the basis of the curse under which Darcy must function. Spoiler Alert!!! Darcy is a dhampir, and each member of the Darcy family faces the situation where he must choose to become a vampire by surrendering to the "need" for blood, or he must be the first to break the curse on the family. The vampirism is passed to the first born son of each generation. No other Darcy has been able to defeat Wickham and the curse, but Fitzwilliam Darcy is determined. Except - he meets Elizabeth Bennet and is drawn to her - desires her as a man would a woman and as a vampire would a victim. Darcy "fights" Wickham as he does in the original Austen book. Darcy still must save Elizabeth's family from Wickham influence. Wickham takes Lydia to Newcastle as he does in the original. Darcy cannot allow himself to love Elizabeth as he does in the original. The fact that Jeffers tries to keep several of the original Austen elements in place helps this story line. With Mr. Darcy, Vampyre, I felt the author threw in every gimmick she could think of to use. This story line is much tighter in its presentation. The characters' motivations are the same, but there is an element of "sexual tension," necessary for a paranormal or vampire story. A vampire story could not be a chaste as the original Austen works so the reader must be aware of that. However, it is not out and out blatant sex. There is the need for completion as one might expect in a vampire story. Jeffers does bring Darcy and Elizabeth together faster than in the original, but I liked the way she treats Elizabeth. Austen saw Elizabeth Bennet as an intelligent woman, one of the things which attracts Darcy in the first place. Jeffers says she makes Elizabeth the "Van Hesling" character, using her intelligence to help Darcy defeat Wickham and to beat his family curse. She has no powers except her intuitiveness and her brain. That makes her a strong opponent for Wickham. In fact, Darcy becomes a stronger opponent against Wickham when he aligns himself with Elizabeth.
Copyright © 2020 Thriftbooks.com Terms of Use | Privacy Policy | Do Not Sell My Personal Information | Accessibility Statement
ThriftBooks® and the ThriftBooks® logo are registered trademarks of Thrift Books Global, LLC