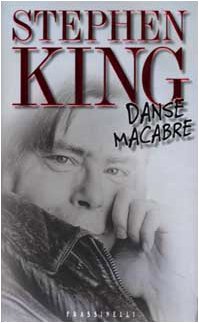 This description may be from another edition of this product. Before he gave us the "one of a kind classic" ( The Wall Street Journal ) memoir On Writing , Stephen King wrote a nonfiction masterpiece in Danse Macabre , "one of the best books on American popular...

Best Guide To Horror Fiction From a Single Author

Published by Thriftbooks.com User , 20 years ago
I have read many books of criticism and opinion on the subject of horror fiction. However, no single author has been able to cover the field of modern horror better than Stephen King. In Danse Macabre King makes the field of horror accessible to the general reader. There are books which explain the Freudian overtones of Dracula or the anti-establishment message of Night of the Living Dead which is, for all practical purposes, useless. English and Cinema majors may find it useful, but the general reader has no time or concern for these trifles. King, while at times veering off topic, gives the reader a road map for the field of horror. He introduces and discusses writers which the general reader of fiction may never have heard of, like James Herbert and Harlan Ellison. And never does the book become boring. King's love for the genre shows in this work. It is like attending an Einstein lecture on Physics; it may get a bit complicated at times, but you know that old Al will bring an energy and enthusiasm to the subject which no one else could ever hope to copy. Other Books Recommended: Stephen Jones and Kim Newman's Horror 100 Best Books (Unusual, Unorthodox, Unbelievable, The Single best book on horror by one than more author)

all hail the king

Published by Thriftbooks.com User , 21 years ago
This is my favorite Stephen King book--I've read it considerably more times than any of his other works. I don't think it's any secret what makes this book so enjoyable--it's really what makes all of his books work--his storytelling power. He has such a friendly, compelling narrative voice--it's like he's casually, and yet powerfully sharing secrets with you, and you can't wait to hear what he has to say next. It might help to enjoy DANSE MACABRE if you are a horror fiction/film fanatic, but then again, it might just make you one even if you're not--it had that effect on me. I tried to see as many of the films and read as many of the books he discussed as I could. (I don't share his warm feelings for the movie "Prophesy" or Peter Straub's "Ghost Story," but join him in highly recommending Ramsey Campbell's horribly titled "The Doll Who Ate His Mother" and the unforgettable "Dawn of the Dead.") Next I moved on to the list of recommended books and movies at the end, and found most of those very worthwhile as well. If you're borderline compulsive like I am, finding a list like that is probably a bad thing--you can't rest until you've checked everything off it, which would probably take a lifetime. I've worked on it on and off for over a decade and am not much more than half done. But the quest goes on, for which I must thank Mr. King, and more specifically, this delightful, engaging, illuminating book.

Published by Thriftbooks.com User , 21 years ago
Danse Macabre is the finest and least known book that King has written. (Evidenced by the 12 lonely reviews in this section.) Do not look for gore; you will not find it. In Danse Macabre you will the educated side of a popular fiction writer. He still has stories to tell, but does so with the organized dicipline of a non-fiction author. He proposes a theory of horror, if there is such a thing, but does so in a way even a computer scientist could understand. You will find new insight into King's fiction and discover how the quality of his writing sets him apart from other horror novelists. Read this book and use it as a checklist for your movies, books, and television. He will not lead you astray.
Copyright © 2020 Thriftbooks.com Terms of Use | Privacy Policy | Do Not Sell My Personal Information | Accessibility Statement
ThriftBooks® and the ThriftBooks® logo are registered trademarks of Thrift Books Global, LLC