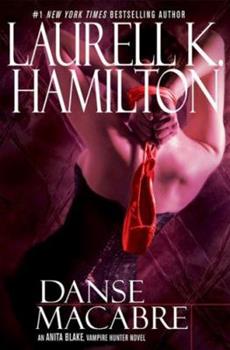 In the thralls of supernatural passion, Anita Blake faces a most human dilemma.

Published by Thriftbooks.com User , 12 years ago
Ok if you have ever had that time where you miss the dreaded curse, then this is definitely a book you can relate to. This is one of my all time favorite books. There's tons of sex of course but that's probably a given if you read Laurell K. Hamilton's work. I really recommend this book to everyone who loves this type of writing. I actually walk up to people in books store that look at romance and I tell them they have to read these books and some of my other fav. Authors. I know it's weird but eh, I don't really care as long as they read it and find out they love it as much as I do. It has all kinds of exciting twists and turns that really did leave me hanging on the edge of my seat, or more technically the edge of the tub, bed and everywhere else I read. I have literally read this book 112 times along with the others that reside in this extremely satisfying genre. Please if you think it might be a good idea to get you are so right. I hope you get it and not only love it as much as I do but also recommend it to others. Go LKH You Rock!!!!

Published by Thriftbooks.com User , 13 years ago
I don't know what everybody is so upset about. Sure, the stories are a lot different than they were in the beginning of the series and it did take me awhile to adjust, but I thought this was a great book. I'm even becoming attached to Micah and Nathaniel. Yeah, it only takes place during one day but so what? Yes, there's plenty of sex. I'm not familiar with soft porn, so I don't have anything to compare it to, but I think the sex scenes are really well written. Best of all, my sex life has improved dramatically because of the inspiration I've gotten from the accounts of Anita's sex life. Maybe I don't feel so betrayed by the changes in the series because I just discovered this series about 2 months ago. I have devoured every book (except the last two) one after another--often losing massive amounts of sleep because I couldn't put the books down. When I realized how important Jean-Claude was becoming, I went back and re-read the first several books to pay more attention to the developing relationship between him and Anita.

I really liked this book and ...

Published by Thriftbooks.com User , 14 years ago
I disagree with most of the other comments. While the sex was more in this book than in the others, I can't wait to see where this series is going.

Sex and the Preternatural

Published by Thriftbooks.com User , 16 years ago
Danse Macabre (2006) is the fourteenth Fantasy novel in the Anita Blake, Vampire Hunter series, following Micah. In the previous novel, Anita raised a dead man to testify for the federal court in Philadelphia. Her powers seemed unusually strong that night. Unfortunately, Emmett Leroy Rose blamed the defendant for his death and even her enhanced powers could not hold the circle. Still, the sniper shooting at her didn't help her control of the zombie. In this novel, Anita fears that she is pregnant and doesn't see how she can take a pregnancy test for the next four days. She decides to keep silent on the possible pregnancy until she has time to check. This news, however, just cannot be keep secret; it leaks out at the most inconvenient times. Finally a test confirms that the possibility is an actuality. Jean-Claude has invited a group of Masters of the City to his domain to celebrate the final performance in the tour of the Danse Macabre ballet troupe. They are also bringing candidates to become Anita's new pomme de sang. A pair of special friends, Augustine and Samuel, are invited to present their candidates prior to the general crowd. But Samuel's wife Thea, a Siren, pushes Anita too far and Augustine is much too aggressive. Then Belle Morte enters Anita's mind to interfere with Augustine's ploy. Afterward, Richard appears in a foul humor. Claudia outfaces him until he can calm himself, but Richard never really stays calm. When Anita inadvertently releases her shields, the pregnancy issue again comes to the forefront. Richard still doesn't understand Anita's viewpoint on children, but Nathaniel takes the wind out of Richard's sails by volunteering to do most of the child rearing. Somehow, the issue of children arouses Nathaniel's dominance to the point of pushing Richard off balance. When Richard makes a snide comment about Nathaniel, Anita orders him out of the room. She has had just as much of his attitude as she can stand. Jean-Claude brings up another point that is later tentatively confirmed by Samuel. Anita's ardeur seems to be operating on its own to test pomme de sang candidates, at least with Masters in Belle's line who have been previously exposed to the ardeur. They need to test this theory before the ballet performance and the cast party on the next day when Anita will be presented to the other Masters of the City. This novel is packed with sex scenes. Since Anita is a succuba to Jean-Claude's incubus, the candidate testing always involves sex. She also uses sex to feed her powers through the ardeur and to pass such power on to her servants. Sometimes sex is used to invoke physical or mental healing and other times it instigates enhanced powers in her partners. This continual need for sex is the primary reason for selecting another pomme de sang. This story seems to lead to personal growth in Anita, Richard and other characters. Anita works out some of her evasions in the relationship between Jean-Claude
Trustpilot
Copyright © 2022 Thriftbooks.com Terms of Use | Privacy Policy | Do Not Sell or Share My Personal Information | Accessibility Statement
ThriftBooks® and the ThriftBooks® logo are registered trademarks of Thrift Books Global, LLC