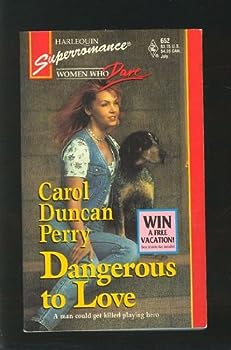 (Part of the Women Who Dare Series)

Dangerous To Love by Carol Duncan Perry released on May 25, 1995 is available now for purchase.

Published by Thriftbooks.com User , 20 years ago
Vicki Winslow did the right thing, by telling the police, when she discovered that her boss was embezzling money. She testified against her boss and he was found guilty. Vicki refuses, however, to enter the Witness Protection Program. Vicki claims that her family and her small hometown are all the protection that she needs. Caine Alexander works in security and never takes bodyguard jobs, but he agrees to look out for Vicki as a favor to his brother-in-law (the detective in charge of the case). Caine has no idea what is in store for him when he arrives in Little Falls, Arkansas. He has to deal with a protective small town, a poetry quoting cousin, a feisty great-aunt, a cabin in the woods, two large dogs, and a skunk (yes a skunk). Caine is not an easy man to know. He keeps walls up so that people cannot get too close. Vicki refuses to let Caine shut her out. Caine hates that she has gotten under his skin, but he can do nothing to stop the attraction that is between them. The more time that they spend together the closer they seem to get. I enjoyed this story more than I thought I would. The romance between Caine and Vicki is great. The mystery and danger makes for a fast paced read. There was even an element of comedy with the addition of sweetpea. The skunk was great, who would ever have thought to add a skunk pet. This is a good book that I would highly recommend.
Trustpilot
Copyright © 2022 Thriftbooks.com Terms of Use | Privacy Policy | Do Not Sell or Share My Personal Information | Accessibility Statement
ThriftBooks® and the ThriftBooks® logo are registered trademarks of Thrift Books Global, LLC