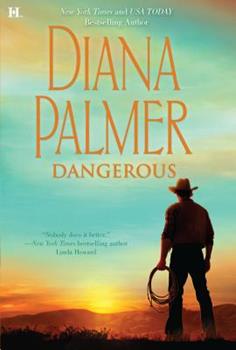 by Diana Palmer and Naima Simone

Tall, lean and headstrong, FBI agent Kilraven lives by his own rules. And one of those rules includes keeping his hands off Jacobsville's resident sweetheart, Winnie Sinclair, no matter the temptation. Shy and innocent, Winnie couldn't handle a man like him--a merciless man with a haunted past. And this small town may hold not only the woman he fights to resist, but the answers to a cold case that is very personal to Kilraven.... Winnie has had her...

Diana Palmer does it again!

Published by Thriftbooks.com User , 11 years ago
I loved dangerous. It has suspence, love, and some humor! Winnie is full of spunk. It gives acknowledgement and honor to our Law Enforcement Officers which the strongly deserve!!! Thank you Diana Palmer for another great book.

Published by Thriftbooks.com User , 11 years ago
I HAVE ALWAYS ENJOYED DIANA PALMER WORK. I THINK IT SHOWS IN HER WORK THAT SHE CARES

one to keep and read more than once.

Published by Thriftbooks.com User , 11 years ago
Originally Posted at: [...] In true Diana Palmer style, the characters come alive on the pages of Dangerous and the plot is a tapestry of the best and the worst of humanity. How love and forgiveness find their way through all the dark intrigues, political corruption, sexual perversion, and greed makes this a gripping story. While Wilraven is a dangerous alpha male, Winnie Sinclair is a desirable darling who dares to gamble on her love being enough to catch and keep the "old Lobo Wolf". She endured her father's hate, copes with her intimidating, overprotective big brothers, and works at a high-stress job as a 9-1-1 dispatcher. Her second sight reaches out to protect Wilraven when he is in danger and her heart longs for him in a way that she has never before experienced. Naïve and innocent in the ways of "man and woman" love, Winnie faces some major decisions as she works toward her goal. Wilraven, as cold and forbidding as the winter weather that prowls across south-central Texas, lets nothing deter him from his seven-year search for the people responsible for the death of his three-year-old daughter and her mother. Visions of how they looked after being killed with a shotgun at close range inhabit his nightmares that haunt his nights. A more tortured hero I have yet to meet. The secondary characters are intriguing in their own roles. Gail Rogers, now a successful detective, continues to pay a high price for mistakes she made years ago. Matt, the twelve-year-old in a wheelchair is totally captivating. Of course, if you are a Diana Palmer fan you will recognize some of these characters and feel like you are getting to catch up with what has been going on in their lives since you last saw them. Wilraven's half-brother Jon Nighthawk and Cammy bring a touch of humor to the story, but have a hard time when it comes to the driven Wilraven whom they both love. The love scenes that sizzle, the work ethic, the advice to never let anger decide which direction to take in a crossroads and the way love meets and beats its adversaries linger in the mind long after the last word is read. Dangerous is one to keep and read more than once.

Did We Read the Same Book??

Published by Thriftbooks.com User , 11 years ago
I thouroughly enjoyed Dangerous. Read it in one sitting. Someone commented that Palmer doesn't know gaming, but Palmer is a gamer (she confessed to an addiction in another book) and even if not completely accurate I thought the games added a fun element to the story as all ages were hooked on the same games--made for camaraderie between varied characters. Perhaps she should just make up games from whole cloth so not to irritate gamers? I had been looking forward to Kilraven's story ever since his introduction in the horrendous Fearless. Palmer is a guilty pleasure for me but this last year she has been on a roll with her Harlequin's (Diamond in the Rough is not to be missed for Palmer fans) and setting up this story to coincide on the timeline with The Maverick (Harley & Alice's story), I enjoyed the interaction between Winnie and Kilraven. It is a given when you open a Palmer that the heroine is going to be virginal---(sometimes she jumps hoops to keep their virginity as in Beloved where the widowed Tira was married to a gay man LOL). But, with Winnie's over protective brother Boone, it was believable she was an innocent. I enjoyed Kilraven having not slept with anyone since his wife died. His cultural heritage and horrid sense of guilt and loss kept him so emotionally isolated that abstinance made sense. Many men lacking Klraven's strong moral compass would have resorted to excess drinking and meaningless sex. Frankly, I am sick of the male 'sluts' that seem to populate a lot of books lately, particulary those set in the Regency era. While not perfect, I really enjoyed Dangerous and look forward to Jon Blackhawk's story later this year.
Copyright © 2020 Thriftbooks.com Terms of Use | Privacy Policy | Do Not Sell My Personal Information | Accessibility Statement
ThriftBooks® and the ThriftBooks® logo are registered trademarks of Thrift Books Global, LLC