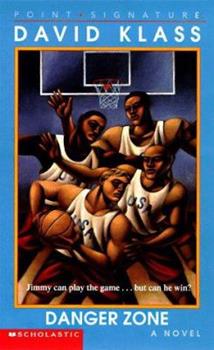 This description may be from another edition of this product. When basketball player Jimmy Doyle is chosen to be part of the American Teen Dream Team to play in Europe, he's flattered. But he's also scared. He's never faced competition--or teammates--this tough...

Published by Thriftbooks.com User , 21 years ago
I recently read Danger Zone, which I thought was very exciting because it was filled with basketball action. It starts out with Jim playing basketball for his high School where he is the big star. Later, his talent is found by two recruiters. They invite Jim to play on the Teen Dream Team which will travel to Europe to play in a tournament. When they are in Europe the team runs into trouble with the local people. I thought this book was great if you are into sports.

Book Grabs Attention of Readers All Over the World!

Published by Thriftbooks.com User , 21 years ago
No matter how old you may be, I'm sure that you will love this book written by such a good author. I liked how David Klass used reality in order to write this piece of fiction/ truth. For example, racism is a big thing in the United States, and around the world, and Klass was very open about the touchy subject. It seemed as though he reversed the script a bit. Thirty years ago, an African- American might be the only one of their race in their class. Now, in the book, Jimmy (the white boy from Minnesota) is taking on the roll of the African- American. It seemed as though Klass wrote from experience, like he had been to Spain and Paris and Germany, or where ever else the characters went on their triumphant journey. I look foward to reading any other book that David Klass comes out with, or any others that he has written.

An Unforgetable Chance at History

Published by Thriftbooks.com User , 21 years ago
Danger Zone by David Klass is an exciting and adventurous book. In this book Jimmy Doyle, the main character, is a star basketball player. Jimmy is asked to play on an All-Star team. The team is suppose to play in Italy for a month. Jimmy says no to this amazing offer. The reason Jimmy says no is because his mom is a widow with 3 kids. When Jimmy was young, his dad died, and ever since Jimmy has had to help his mom in the hardware store. Jimmy decides to go with a little help from his mom. In Italy Jimmy has to survive racism, his teammates, and Beautiful Italian ladies. I reccomend this book to anyone who likes adventure and sports.

A high suspense, can't take your face out of book.

Published by Thriftbooks.com User , 22 years ago
The book starts out in Graham,Minnesota where this kid,his sisters,and his mom live in an apartment.His dad died 4 or 5 years before and helped run the hardware store with his Mom. He gets offered a spot in the Under seventeen basketball championships in Rome,Italy.Though there are only 2 white kids on the team. Once they get to Rome something bad happens to them snd could cost them the championships in Rome.

Published by Thriftbooks.com User , 22 years ago
I thought the book title went well with the book. The danger stood for the player's lives because in Danger Zone the character's lives are in danger. The zone stood for when the main character, Jimmy Doyle, and a supporting character, Augustus LeMay, were on fire during the last game. This basically means they made every shot they put up. Firstly, the book kept me on my toes. During the games the U.S. team played the author would write everything in detail. It was like every shot and every basket was another point for the good guys. That was one thing I like when an author rights in great detail. Secondly, all the characters came to life. It was like when the reader read the book the characters came out of the book and were performing the scene right from the book in front of the reader's eyes. Every new chapter brought another piece of the puzzle to the puzzle. Thirdly, I thought the book was just great. It had everything in a book that I qualify for a great time. One main quality that was good was that the plot was different. It had a twist of solving the conflict. Also it threw in some other little problems to take the players off their game. I thought that was perfect because it made the characters come over something that was troubling them. For one of the characters, Jimmy, he had to overcome the fear of his father that haunted him. That was smart on the author's part. In conclusion, I would recommend this book almost to everybody. I would definitely recommend this book to sports fans. I wouldn't recommend this book to people who despise sports. Lastly, Danger Zone was excellent.
Copyright © 2020 Thriftbooks.com Terms of Use | Privacy Policy | Do Not Sell My Personal Information | Accessibility Statement
ThriftBooks® and the ThriftBooks® logo are registered trademarks of Thrift Books Global, LLC