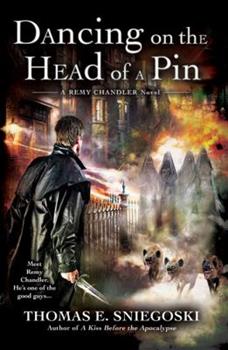 Dancing on the Head of a Pin

(Book #2 in the Remy Chandler Series)

Remy Chandler ?is a character I can't wait to see again.'( Christopher Golden, bestselling author of The Lost Ones ) Still mourning the loss of his wife, fallen angel Remy Chandler has immersed himself in investigating dangerous supernatural cases. His latest: the theft of a cache of ancient weaponry stolen from a collector who deals in antiquities of a dark and dubious nature. The weapons, Remy knows, were forged eons ago and imbued with unimaginable...

Published by Thriftbooks.com User , 12 years ago
This is the 2nd outing in the series, excluding a novella in Mean Streets. This series is getting good. You care about the characters and the plot is interesting if sometimes a little too simple... I will be very interested to see if Mr. Sniegoski tackle God in future books, his view of heaven's wariors is very Old Testement, and they seem to make a lot of mistakes. Which is odd considering that they dont appear to have much free will. So maybe not mistakes and all part of the bigger picture? At any rate I will definitely read the next Remy novel!

Published by Thriftbooks.com User , 12 years ago
This is the second Remy Chandler novel which is the follow-up to the great series opener A Kiss Before the Apocalyse. Sniegoski is still a fairly new writer to me even though he has been around for more than a decade, although the Remy books are his first solo foray into adult books as he is very well known for his YA Fallen series. Dancing on the Head of a Pin sees Remy Chandler, also known as Remial of the angel host Seraphim, getting sucked into more of the heavenly host's business. After losing his human wife Remy is still going through a lot of grief. He is struggling to hold on to his humanity as his great link has left him. I love the Remy character and how Sniegoski has built him up with a better sense of humanity than most people posses. Marlowe, Remy's always lovable dog, does a great job of keeping Remy connected to the human world, but after releasing his angelic nature Remy is finding it harder and harder to keep his thoughts in the human world. Remy starts off by investigating the selling of angel organs by a group of the Fallen. Remy eventually finds the angel in question and witnesses him dying. Remy feels obligated to tell the group of Nomads the angel came from about his demise. The Nomads are another sect of Angels who sat out the Morningstar's war with heaven, while the Fallen are the angels who fought on the Morningstar's (Devil) side. They have no place in heaven nor hell and have lived on the earth for a millennia contemplating what they should have done during the great war. Remy is soon hired by an old wealthy collector of antique weapons to recover a special group of weapons recently stolen from him. Remy learns the weapons are the legendary pitiless weapons. These are weapons of great strength more than equal to any other ever created. Remy uncovers the first of the pitiless weapons, which leads him into the deeper and darker mysteries of why the weapons were stolen and what their true purpose is. The weapons don't get much play until the end of the book are used very swiftly and could have easily been over done given their strength. Dealings with the Fallen and a Nephlim bring out more players in the game including Hellions. Hellions are kind of like giant evil hyenas who keep things inline over Hell and its inhabitants. Sniegoski keeps surprising me with the myriad of angelic creatures and sects involved. Hopefully he can keep this up in further books. Remy eventually uncovers who is behind all of the happenings and what they are planning The ending wasn't quite what I expected, but it worked really well, especially in setting up bigger events for future books. Sniegoski almost makes we want to go back and read the bible for pure entertainment given the cast of characters and creatures he employs. I give Dancing on the Head of a Pin 8 out of 10 hats. It is definitely advisable to read A Kiss Before the Apocalypse first, which was just released in Mass Market format, although Dancing could be enjoyed on its own.

Published by Thriftbooks.com User , 12 years ago
This is one of those books that you race through because you must know what happens next and how it ends, at the same time wishing it would last forever so you could stay in the world with these characters. Remy Chandler (who works as a PI) is the human guise of Remiel of the host Seraphim who chose to come to earth when Lucifer was bound to the prison of hell. Now, another angelically related case has come to Remy, to recover ancient weapons of power. What they are, what they are for, who wants them, and what Remy does about it weave into a fantastic urban fantasy, with great characters (including Marlowe, the Labrador Retriever). I'm eagerly awaiting the next one. The first (A Kiss Before the Apocalypse) was really good, but this one is truly great

Published by Thriftbooks.com User , 12 years ago
Dancing on the Head of a Pin: A Remy Chandler Novel Sniegoski does it again, he created another exciting Remy novel that is action packed, with many twists and turns. It kept me on the edge of my seat and glued to the pages. The plot is unpredictable and the characters easily come to life, Remy is strong, intelligent, funny and sensitive. His side kick Marlowe is a love. The setting takes place in Boston and the surrounding cities, which makes it easy for a Bostonian like myself to picture the various places. "Dancing on the Head of a Pin" is a must read.

Published by Thriftbooks.com User , 12 years ago
It was Paradise until the Morningstar let pride and jealousy turned him away from the Creator. He and his allies went to war against those loyal to the Lord. Angel fought angel until Heaven was filled with the dead. Although Archangel Remiel of the host of the Seraphim fought on the winning side against Lucifer and his rebels, he witnessed the atrocities that his squad of angels committed in the name of the Father. He left Heaven in disgust and came to earth where he hid his angelic side to live amidst humans and even loved a human. It has been a few months since his beloved wife died and the grieving Remy Chandler, as he calls himself, finally returns to the life of a twenty-first century Boston private investigator. Alfred Karnighan hires Remy to find some ancient weapons; artifacts stolen from his collection, which is secured by a thick steal door in his basement. The Fallen want the weapons as does the Nomads, angels allegedly inspired by Remy who left Paradise after he did. They are neutrals who come and go between heaven, hell and earth have a grand plan to use these weapons. To prevent a second tragic war, Remy casts off his human cloak returning to the warrior archangel Remiel goes along with a Fallen and a Repentant angel hoping to go home one day if forgiven, into hell. The allegorical title referring to medieval philosophy aside, DANCING ON THE HEAD OF A PIN is a powerful urban fantasy starring a hero who knows heaven's occupants were changed by the war; so he wants no part of the new heaven (see A KISS BEFORE THE APOCALYPSE). Still when it matters, Remiel's gut loyalty to the Creator leads him to defend heaven as he loathes the Fallen especially Lucifer whom he holds culpable for Paradise Lost. Readers will feel for Remy and pray he finds redemption and happiness amidst the humans he admires. Harriet Klausner
Copyright © 2020 Thriftbooks.com Terms of Use | Privacy Policy | Do Not Sell My Personal Information | Accessibility Statement
ThriftBooks® and the ThriftBooks® logo are registered trademarks of Thrift Books Global, LLC