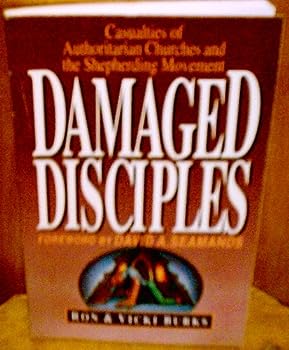 Damaged Disciples: Casualties of Authoritarian Churches and the Shepherding Movement

Damaged Disciples is the account of Ron and Vicki Burks' search for a meaningful faith. Unfortunately, the nontraditional church they found trapped them in a branch of the charismatic movement that... This description may be from another edition of this product.

Damaged Disciples:casualties of Authoritarian churches and the shepherding movement

Published by Thriftbooks.com User , 13 years ago
This book offers an insider look and first-hand experience of spirirual abuse within authoritarian churches. It should be a must-read for whoever is in ministry, studying for it or contemplating it.

So glad this was written, but use a grain of salt

Published by Thriftbooks.com User , 17 years ago
I was wary to purchase this book because I was concerned that it would be another "cult hunter" book full of unbalanced distortions and half-truths, especially since the authors were wounded in the movement. For the most part the book avoids that pitfall. The end section theology, especially with regard to family leadership misses the mark a bit--probably overreacting. However, the stories, and especially Ron's life story, which is the majority of the book, are very valuable. They give you a personal understanding for what it was like in at least the official Mobile-based part of the movement. It's actually very sad that such a cultish world could be created by men who were not intending to do so, and otherwise taught orthodox doctrine. And it's especially sad to see a promising young couple give such a large portion of their lives to this. I would recommend that you also read S. David Moore's book on the Shepherding Movement if you want a more complete picture-- I believe that neither book stands on its own. Those seeking to build new church structures where Godly authority is present would do well to read both. It was not that all of the new emphases of the movement were wrong, but it was the case that certain emphases were unbalanced enough to hurt a lot of people, and we should be careful to avoid those, and take responsibility for our teachings if people are hurt.

Escape from shepherding and authoritarian abuse

Published by Thriftbooks.com User , 18 years ago
This book is well worth reading if you need information about the shepherding/discipleship error, and especially if youhave been victimized by it. The authors were involved inshepherding for many years, and present a thorough examinationof what is wrong with the beliefs and practices. The bookis written in a calm tone and is not angry, bitter orvindictive. The shepherding errors are wide spread in many churches and Christian groups today even though they are no longer namedas such. If you have been hurt by spiritual abuse in a Christian setting,this book will help you. You may be surprised, as I was, todiscover that many of the teachings you were subjected toare actually shepherding teachings. These ideas became verypopular and are still wide spread despite the fact thatthey have largely either gone underground, are renamed, ornot recognized as being shepherding. If you were hurt in a word of faith church I would recommend reading this book tosee the origin of some of the common practices and beliefs which are actually unbiblical, despite perhaps being sincere.Reviewed by Oceanwaves

This one hit close to home!

Published by Thriftbooks.com User , 19 years ago
This book shows the problems experienced by a young couple who were involved in the Shepherding Movement surfacing early 1970's in the Charismatic Movement (which was strongly influencing Evangelical Christianity). Basically, there were four (later five) prominent Bible teachers who began to emphasize an obedience to human authority all out of proportion to what is actually taught in the Bible.And this hit close to home. Although my experience was different from the authors', I still could identify with it strongly. In the early 1970's I was going through a difficult time in my life, and I received a great deal of spiritual and emotional support from the Charismatic Movement.However, I began to notice a shift in the loving, caring prayer group I had been attending. They were showing disturbing authoritarian attitudes and sexism, emphasizing an obedience to human authority that seemed oppressive to me. It turned out my formerly loving prayer group was buying into this "Shepherding Movement." Later on I questioned some of the ideas they were putting out, and I got emphatically shown the door! Even though these Bible teachers are not teaching "Shepherding" any more, many lives have been hurt by this, and the book is well worth reading. This kind of problem can happen again when people put obedience to human authority on the same par with obedience to God. We need to be aware of this -- and most important, we need to study the Bible for ourselves to find out what it actually says. There still are oppressive groups out there who operate in much the same way, even if the name is different.
Trustpilot
Copyright © 2022 Thriftbooks.com Terms of Use | Privacy Policy | Do Not Sell or Share My Personal Information | Accessibility Statement
ThriftBooks® and the ThriftBooks® logo are registered trademarks of Thrift Books Global, LLC