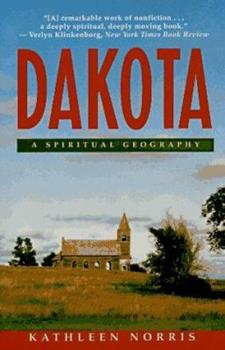 This description may be from another edition of this product. A beautiful meditation on life in the Great Plains from award-winning author and poet Kathleen Norris. Kathleen Norris invites readers to experience rich moments of prayer and presence in Dakota , a...

a beautiful, deliberate book of faith

Published by Thriftbooks.com User , 18 years ago
Kathleen Norris is the author of Amazing Grace: A Vocabulary of Faith, and The Cloister Walk. She is a poet. Dakota was her first work of nonfiction/memoir. Having read both Amazing Grace and The Cloister Walk, I had an idea of what to expect from Norris's work. She writes deeply personal and deeply spiritual books. Dakota has the same type of feel to it, but the location and the subject is different.Kathleen Norris's past lay in western South Dakota, but for twenty years she had abandoned both her faith as well has her history. She went to school in New York but decides to move back to Lemmon, SD with her husband. Her book is subtitled "A Spiritual Geography". She writes early on that geography comes from the words for earth and writing, and so knowing that this is a spiritual geography we immediately know that this is a spiritual discussion of the Dakotas, as well as also being about Norris herself. Norris writes about small town life and small town church, and a semi-history of the town of Lemmon. Since most of the details are told in anecdote, it makes things easier to read. One thing that struck me was how she was comparing monastic life to small town faith and how much things tied together like that. The focus on monastic life and on monks is a theme and a topic that will run throughout the book as well as into her subsequent books. Kathleen Norris may not have a mainstream Christian faith, but she has a deep reverence and respect for the Christian tradition and faith, especially that which has come from the monasteries. This is a slow moving, peaceful book. It is thoughtful, intelligent, and moving. It is filled to the brim with a steady faith in Christ and in some ways, it moves like time spent in a monastery. I don't know if this sounds like a recommendation, but it is meant to be. I found Dakota to be very interesting and along with Dakota, I would recommend Norris's later book: Amazing Grace.

One Of The Greatest Quiet Books

Published by Thriftbooks.com User , 19 years ago
Norris is quite amazing, having overcome the natural fault of looking at the world through her previous pre-conceptions...i.e., a New Yorker who just has to comment on how different real small town life is. She is one of the few who can actually convey the essence of a small town (and her credibility is strengthened by her fair mention of both pros and cons).My Dad had an uncle who homesteaded in Lemon, SD (where Norris lives) and I spent most summers on my Mom's family's ranch on the James River. Norris helped me understand what all those years were really about.The stark spirituality of her monastic experiences are powerful. This is why the book is not a slow read (as many have commented)....it is a quiet read.....and from that forgotten strength in our busy world, this book is a remarkable refuge.Read this in quiet.....understand small town life on the starkly beautiful great northern plains......and become a better person for the time you give Norris' writing. I predict you will find another small piece to the puzzle of where you fit into the great scheme of things....whether it be your religious beliefs or your sense of history, geography, art, or self....it's in there and she will help you to reach it in her own quiet and mysterious way.

From the Big Apple to Lemmon-a moving journey.

Published by Thriftbooks.com User , 20 years ago
This was one of the most enjoyable and stimulating reads I have had for a long time. It is doubtful whether any other reader of this book is so far removed, geographically, from Lemmon, South Dakota, (where the author Kathleen Norris lives), as myself. Yet, living in the open spaces of the wheatbelt in Western Australia allows me to probably identify with the author's situation more than a New Yorker (and NY city is where Norris relocated from - back to her family roots in SD). Her instinctive knowledge and portraits of small town life is applicable not only to her own patch, in the far northwest of SD, but also, in so many respects, to other lands.Kathleen Norris gives a nice blend of Dakotan history-interwoven with topical,personal and spiritual issues. The chapter on the small church at Hope gives a great insight into the dynamics of a small farming/ranching community. 'Getting to Hope' filled me with the same. Presumably, the great colour picture on the cover of 'Dakota' was of this prairie church that somehow typifies the spiritual geography,described by Norris in her text.The author's ecumenical bent is obvious by the fact that, although solidly Protestant, she values the monastic life and, as a Benedictine oblate, she takes the reader with her, 'on retreat,' behind the walls, giving a realistic appraisal of the community of Catholic monks and making some interesting comparisons between monastic life and that of small towns. Visiting 'the Big Apple' Norris is told by a dying friend, " I like the person you are becoming...those monks are good for you. Don't let them forget me." Norris notes:" Suddenly I saw...what monks are for. Their hospitality allowed us to say our goodbyes and allowed my friend a chance to bless me and charge me with keeping her memory." Any lingering notions that Norris had of monks being an anachronism went out the window and into the Manhattan night!In a sense, 'Dakota'did much the same for me. I read it in mid- January as I spent time in my parents home, usually alone, cleaning up after my step-father's death (on Christmas Day). Birth, death, new life are important subjects and Norris has the ability and strength of writing to gently make her reader reflect on these great issues. She writes for all, yet writes for one. (I suppose it is appropriate that I write this review on my birthday).In writing this book Norris has crossed many boundaries-far wider than the Great Plains. She has not made me want to visit South Dakota- I have wanted to do that for a long time- but she has ensured that when I do I will certainly take-in her remote part of the state. However, one doesn't have to physically travel to Dakota to make a great journey- that happens when you commence to read this book. Highly recommended.

I've Read This Book to Tatters

Published by Thriftbooks.com User , 21 years ago
Her first book, and her best. I keep coming back to it. I've given copies to relatives and friends, and they've given copies to relatives and friends. . .
Copyright © 2020 Thriftbooks.com Terms of Use | Privacy Policy | Do Not Sell My Personal Information | Accessibility Statement
ThriftBooks® and the ThriftBooks® logo are registered trademarks of Thrift Books Global, LLC