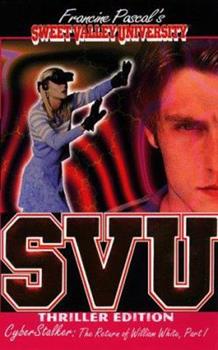 When the Virtual Reality Fair arrived on the SVU quad, Elizabeth Wakefield thought it sounded like an extreme waste of time. That was before Elizabeth's twin sister, Jessica, convinced her to give virtual reality a try. That was before Elizabeth saw...him. He appeared from out of nowhere, a glowing figure with an achingly beautiful face and a wickedly familiar grin. A man she once loved--and feared. A man she thought was dead. But something evil was...

Published by Thriftbooks.com User , 19 years ago
This book is definetly good it's more interesting to read than the second one but I really enjoy this book more.. Elizabeth and Tom Watts (her boyfriend) seem to be having trouble in their relationship. Elizabeth ex-boyfriend William White who Elizabeth thought died in a Car Accident really didn't. William White and Elizabeth were really in love until one day Elizabeth finds out that he is a racist and was involve in an attack of her bestfriend Nina and her boyfriend Ryan. Elizabeth expose the news all over campus. But when William White returns is he looking for a second chance or revenge?? This book will leave you amaze!

Published by Thriftbooks.com User , 22 years ago
Listen. This book is good. I don't care if lovely William has returned for about the fifth time. I like him. I also know the fact that Tom and Elizabeth were born to be together not that wussy ugly Todd. So what if the book isn't dwelling much in the old reality area. You don't read books for reality, you read them to be entertained (otherwise you'd read an encyclopedia instead) and this book is highly entertaining. I live in England and my friend got it over to me. Bravo to the writers. I look and londg for the next installment of wonderful Will.

Published by Thriftbooks.com User , 22 years ago
This was a great book- even though it is very far from reality I still thank it was excellent. When will William ever die. He should have died the first time but now this was the best book so I regreat ever saying that- it may be far from reality but good.

Published by Thriftbooks.com User , 22 years ago
Elizabeth is stuplified when a mysterious white tent appears on campus. CyberDreams it is called. Then Elizabeth is getting haunted by a weirdo maniac. Overall, this was a good book. But I'd rather stick with SVH eventhough I really liked this book.
Copyright © 2020 Thriftbooks.com Terms of Use | Privacy Policy | Do Not Sell My Personal Information | Accessibility Statement
ThriftBooks® and the ThriftBooks® logo are registered trademarks of Thrift Books Global, LLC