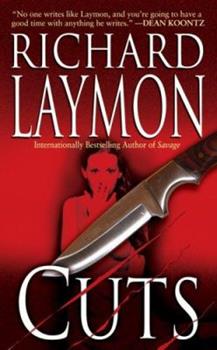 Albert Prince has one passion in life: he loves to cut people. He's about to leave a trail of blood from Chicago to California. Previously published as a limited edition hardcover, this novel by the USA Today bestselling author of Savage is available in paperback for the first time.

Published by Thriftbooks.com User , 13 years ago
The late great Richard Laymon was one guy who could write a powerful story and have you glued to the pages. I've always thought psychos hiding in closets with sharp knives, waiting for you when you come home, were always scary. The idea of an Albert Prince waiting for me when I go to grab a pair of socks out of my closet, is crazy. The way Laymon stitched all these characters together in the story, is amazing to read. I would advise any writers of horror out there to read this if only for that. Another great thing is how much he packs in to a book the size of some longer short stories. You'll finish this in two or three days, and I thought it was good enough to read back over favorite parts when I was done. 5 Stars!

Published by Thriftbooks.com User , 13 years ago
Cuts is standard Richard Laymon, which is not a bad thing. In fact, like most of his other books, it is a quick and entertaining read. In 1975 Grand Beach, a community in the Los Angeles area, a number of individuals are involved in a soap opera of sorts. Young and beautiful Janet Arthur has just found out she's pregnant; when her boyfriend finds out, he demands an abortion; she instead leaves him, a choice he is not happy with. In need of a job, she will find a possibility as a substitute at a local high school. Among the teachers already there is the icy Helen Bryant, married to the bitter Lester. As Lester gets involved with one of Helen's co-workers, she is sleeping with a student. It's all typical soap opera material, but it is only half the story. In the other, Chicago teen Albert Prince finds he enjoys cutting people, a discovery that will lead him on a vicious killing spree. He flees from his home and heads west, murdering and stealing as he approaches L.A. and an inevitable and violent confrontation with Janet and others. (If arrested, would he be Prince, Albert in a can?) Like several other Laymon novels (such as Into the Fire), Laymon keeps two separate plot lines going for most of the book which only converge at the end. The reader knows that this will happen, building the suspense. As usual, there is plenty of sex and violence, but Laymon makes it work well. Though not one of the best known horror writers, Laymon is still one of the better ones, and Cuts affirms that fact.

Published by Thriftbooks.com User , 13 years ago
I love Richard Laymon. Not like that. I love his writing. This book espcially. Orignially it was a hard to find, expensive, hard-cover but Leisure books has done everyone a favor and re-released it. It is two stories put together (i.e. "No Santuary, "Into the Fire"). One story focuses on Albert Prince and his cross-country kiling spree, which is reminiscent of "Endless Night" in which how the Prince manages to avoid detection. The other story is not so typical Laymon. It is the story of the trials and tribulations of a group of teachers and their spouses in California. It may come off like a cheesy soap opera at first but as the story unfolds and the two stories converge it is everything you love about Laymons and you remember why in the first place why he is one of the Masters of Horror.

Laymon brings us a different approach and it works!

Published by Thriftbooks.com User , 21 years ago
CUTS is a different Laymon novel; it's subtle, succinct and slow. In typical Laymon fashion, we start the novel during an abbreviated sex act. Albert Prince is trying to lose his virginity, but the girl he's with wants more money than he currently has so Albert leaves her. On his way home Albert has an encounter that makes us understand he's not a nice boy. And that he will return...with hatred.Janet Arthur wakes up next to her boyfriend, Dave. She tells him a secret, he kicks her out. Janet moves in with Meg. Lester and Helen are married, in words only. Helen's a "cold fish" and Lester has resorted to an affair. Emily Jean is an older woman with a daughter who is just starting to catch her break in the movie business. Ian's a writer. All of these people are put together through work, circumstances or nefarious ways.CUTS is set in 1975 and the book has the slow, pot-induced, haziness aspect to the narrative. Laymon takes a bit more time than usual to flesh out all the characters and giving them enough life so I could get a good feel for each's idiosyncracies. I knew how they should act, react and deal with each other and in dire circumstances. The genius in this book is the patience Laymon had to roll these characters out, not hurry them to join them all together, and let circumstance take over and let be what is to be. It's a bit frustrating, trying to figure out what all of these people are doing in this novel: but Laymon's deft skill of pulling you in is addictive and you can't stop reading. You need to know what happens next.Laymon's a master of subtlety when it comes to understanding the way humans deal with each other. Many times, during a dialogue scene, Laymon will have the characters think sexy thoughts about one and all, even if they aren't in the direct conversation. This makes the characters more human and believable.CUTS is a step in the right direction for Richard Laymon. It is a novel that hits you in places untouched. It doesn't make you feel good because there is almost no cause for the terror that is being wrought. Laymon has delivered a subtle horror story with a fairly high body count. And he's only beginning, heh heh. Be afraid...be very afraid! Highest Recommendation.

Violent and funny, and can't-put-downable

Published by Thriftbooks.com User , 22 years ago
It takes enormous skill to twist and weave the lives multiple characters, without leaving the reader just a little confused as to who's doing what to whom - Richard Laymon handles the gradually intersecting lives of his cast with skill and humour as they hurtle to the thrilling conclusion. There's a psycho killer type of course, a pregnant woman, her unpleasant boyfriend, and promiscuous best friend. Then there's an unhappy university couple, a teacher with another life, the faded Southern Belle Type, and her wanna-be actress daughter. Like his other books "Cuts" is both violent and very funny (in a warped way).
Copyright © 2020 Thriftbooks.com Terms of Use | Privacy Policy | Do Not Sell My Personal Information | Accessibility Statement
ThriftBooks® and the ThriftBooks® logo are registered trademarks of Thrift Books Global, LLC