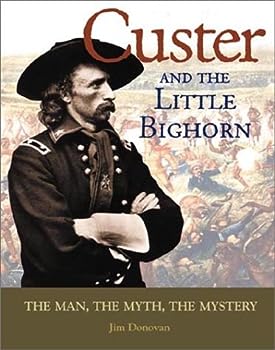 Custer and the Little Bighorn: The Man, the Myth, the Mystery

This is the first major illustrated book to examine the life of this complex figure and this equally complex battle. Besides being lavishly illustrated and the first true photographic history of... This description may be from another edition of this product.

What a great read!

Published by Thriftbooks.com User , 21 years ago
Custer and the Little Bighorn was simply a great read! Not only are the illustrations and photos absolutely gorgeous - giving the reader a perfect visual context for the fascinating and tragic story of George Armstrong Custer, but once I started reading I couldn't put it down! The author obviously knows his history AND knows how to grab the reader's interest from the get-go and not give it up until after the final, bloody battle. This is a great coffee table book - with it's multitude of great photos, illustrations and maps. I think it's a terrific gift for any history buff - male or female, of any age. I'm keeping the first one I bought for myself, but it's also a definite on my gift-giving list for family and friends!

Published by Thriftbooks.com User , 21 years ago
BOOK REVIEWCUSTER AND THE LITTLE BIG HORN THE MAN THE MYSTERY AND THE MYTHJim Donovan Voyageur PressMost illustrated coffee table books are studiously bucolic, but once in a while a book will arrive that involves subjects with real meat. What could be better than the true story of a flamboyant American warrior of a glorious time long ago, a time before neighborhood associations?Surprisingly, the Custer and the Little Bighorn story has never been collected and presented in a large illustrated book, and neither has the biography of George Custer, who was in many ways the original role model for Theodore Roosevelt, George Patton, and Douglas McArthur. The central question "Why was his death such a big deal in 1876?" is resoundingly answered in this beautifully written and well-organized book, that is actually two books, a biography, and the definitive work on the Custer massacre and it's important aftermath. The biography is surprisingly interesting, and details Custer's incredible Civil War record. He went from a green West Point grad to General in less than four years, accumulating a shoe box full of commendations for bravery, gallantry under fire, and achieving one key breakthrough after another. His unprecedented, almost ridiculous clothes and leadership style, and above all his combat results, seem impossible for one man to have achieved and survived. Donovan treats Custer's civil war biography with the depth, detail, page count and comprehensive photo collection that this part of the story deserves. He uses several quotes from men around Custer, including his soldiers, which add depth and insight to the biography. The myth that Custer was reckless and foolhardy is dispelled by the men who observed him in combat, men who realized that initiative and momentum are what win battles.Donovan provides wonderful detail level of Custer's storybook romance with Libbie, that includes silly, touching lines from their voluminous letters and a photograph of them together in 1865 that says it all. The compilation and presentation of the many photographs, paintings, lithographs, and pictographs in the book are fascinating and placed with detailed captions that link them to the story. The six crude pictographs drawn by Red Horse and others include details that dramatically affected the outcome of the Little Bighorn battle. The use of lances is seen clearly, a tactic that helped turn the tide of battle, and every rifle carried by a native American is a repeating rifle, one of the many haunting little ironies of this story. Custer's men were issued a single-shot rifle notorious for jamming, and were a bastard child of pork politics.Outbreaks of peace are disaster for the warrior. The book illuminates the almost complete disintegration of the army after the civil war and follows Custer through his many postings in the dusty hellholes of the American frontier, where desertion rates ran high, flogging was common, and the adage "Beatings will continue until moral

Published by Thriftbooks.com User , 21 years ago
This is a concise, complete and well researched account of Custer's military career. The photos and maps are fantastic! I finished this book in one day. This is a great book for anyone interested in Custer, but uninformed. It's all here in a succinct well written and beautifully illustrated book.

a beautiful and insightful book--it's great!!!

Published by Thriftbooks.com User , 21 years ago
A friend showed me a copy of Custer and the Little Bighorn, and the photos in this book really struck me. Custer's wife Libby was *gorgeous*! That's pretty amazing for the 1800s. And Gen. Custer himself was a chameleon--he looks like a different person in every photo. And after reading the really wonderful text, his different looks made sense. He was a man in lots of very different circumstances trying to look heroic. This book was so well written and researched. And unbiased, too. Donovan did a good job of showing Custer's virtues and strengths as well as his big flaws in his personality and judgment. It's a really good book, and I'm getting two more copies just to give to my dad and my father-in-law. It's a dad kind of book.
Trustpilot
Copyright © 2022 Thriftbooks.com Terms of Use | Privacy Policy | Do Not Sell My Personal Information | Cookie Preferences | Accessibility Statement
ThriftBooks® and the ThriftBooks® logo are registered trademarks of Thrift Books Global, LLC