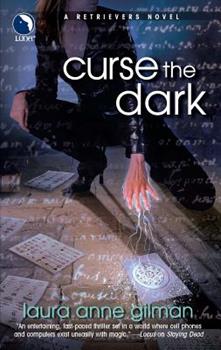 (Book #2 in the Retrievers Series)

Once more Wren Valere's game plan has taken an unexpected direction. She'd agreed to a bargain with one supersecret magic-watching outfit to protect her and her partner on their last job. But now the Silence is trying to wedge them apart. On the one hand, ever since she and Sergei began to talk about their "relationship," things have been tricky. On the other, though... Well, no one better try to stand between Wren and Sergei when danger is near So...

Published by Thriftbooks.com User , 15 years ago
In Curse the Dark, Wren and Sergei return, this time they are working for the Silence and almost instantly regret it when a job takes them across the world to Italy. Wren and Segei are sent to retrieve a magical parchment that whenever someone reads it they disappear. Their search finds them losing, but they also gain something from each other. Back home there is a battle between the magic users and the nulls. Sides are forming and a war is beginning and Wren is caught in the middle. Sacfrices will have to be made that will leave Wren desvatated.

Published by Thriftbooks.com User , 16 years ago
I think this was a great debut novel in a series and it really stood out from all the other novels like it. I greatly enjoyed the characters - to the point where I bought the books instead of just reading them through the library. My only complaint is that I wasn't sure if this was the first book due to mention of the character's past. I do not mind prequels but I do hate being confused in the middle of a book.

Published by Thriftbooks.com User , 16 years ago
Magic is current, and the current in your walls works just fine. Wren, also known as the Great Wren in Italy, is out of work when The Silence gives her a contract to find a missing parchment stolen from a convent in Italy. The Cosa back in NY are in an uproar becuase key figures have dissapeared, and The Guild is getting the blame. Oh yes beware the parchment because whoever reads it disapears. Wren and Sergei are up to their knecks in trouble with even less information to go on than on their last caper, and ever growing intimacy in their own relationship. This series is starting to look a little like Rachel Caine's Weather Warden series because each book gets Wren into even more dangerous quandaries, but at least they aren't world catastrophies in the making like the Weather Warden books, oops, if this parchment gets loose it could wipe out mankind, but nobody, and I mean nobody, knows this. I have only one objection to this story and that is the climactic scene where people appear out of nowhere, but it is a small gripe. If anyone has been following my reviews, you know that I love authors who delve into the politics and cultures of their worlds, and Laura Anne Gilman does this very well. As the matter of fact, it is what helps to drive the plots in her Retrievers novels so far. If this is your first introduction to Wren and Sergei know this. Magic not only works, but those who work with current find that it is "mostly" predictable. Wren is a Talent, a user of current, while her partner, manager, and maybe lover?, is a Null (someone unable to use the current or with almost negligible use for it). The magically inlined call themselves the Cosa Nostradamus and they include the Mage Guild, a highly organised magicians union that tries to control all of the talented; the Lonejacks, Talent that refuse to work for or with the guild; and the Fatae, your Demons (PB is Wren's top researcher and Sergei leans on him to keep an eye on her. PB stands for polar bear because he looks like one except for his red eyes), Angels, Dryads and other magical creatures. Oh did I mention that someone, the mage guild is the number one suspect, is going around killing members of the Cosa Nostradamus, and that a civil war is on the verge of happening in NY? Laura Anne Gillman is a rising star in the Modern Paranormal genre, catch her while you can

Published by Thriftbooks.com User , 17 years ago
Really good book, well written and a great start to the series. The second book is even better, and I can't wait for the third!

Published by Thriftbooks.com User , 17 years ago
In a world where most people don't believe in magic, there is a group of practitioners, humans who have talent to use the current from electricity to perform magic. Wren is a Retriever, a lonejack (a Talent not affiliated with the Mage Council); a person who finds and returns missing objects to the client. Her partner Sergei convinces her to take a contract from the Silence an organization who keeps the world from imploding. Their first assignment is to retrieve a manuscript that was stolen from the House of Legend a church in Sienna, Italy. When they arrive there, they learn that the church is not wired for electricity because the monks, unknowingly are guarding the library which contains malevolent manuscripts, texts and books. These guardians know that whoever reads the manuscript disappeared. Information sends them back to New York where the book is now in the hands of a private library that they are unable to gain access to due to spells. If they don't find a way to return the book to the Silence, the tome will wreck havoc on the city and then the country and if not unchecked, the world. CURSE THE DARK is a great romantic fantasy that will appeal to readers of Laurell K. Hamilton. The heroine is blacklisted by the Mage Council, is trying to keep the lonejacks from battling the council and is trying to adjust to the consummation of her relationship with Sergei. She also wants the fatae (the non-human magical creatures) protected by Talents who see them as an unfavorable species. Laura Anne Gilman is a master at characterizations, a great world builder and a gifted storyteller. Harriet Klausner
Trustpilot
Copyright © 2022 Thriftbooks.com Terms of Use | Privacy Policy | Do Not Sell My Personal Information | Cookie Preferences | Accessibility Statement
ThriftBooks® and the ThriftBooks® logo are registered trademarks of Thrift Books Global, LLC