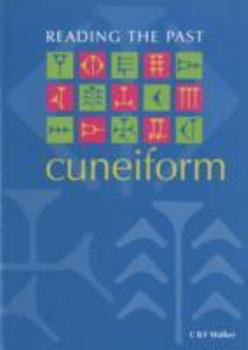 Reading the Past Cuneiform /anglais

The cuneiform writing system flourished in the Near East from before 3000 BC to AD 75. This book surveys the development of the script from the earliest pictographic signs to the latest astronomical... This description may be from another edition of this product.

Published by Thriftbooks.com User , 15 years ago
C.B.F. Walker 'dubsar' (you just have to read the book to understand) has authored a well laid-out work. Reflecting the idea of writing in a limited space on clay tablets, he made his words count with a limited number of pages. If you are only slightly interested in this subject, you will enjoy this book. The main body of reading totals 60 pages (he must have choose this number out of respect for the Babylonian's sexagesimal numeral system). This book can easily be read in a few sittings. As if Walker's words weren't comprehensible enough, he adds clear pictures and drawings. He utilizes simple cuneiform inscriptions as examples. The chapters are: Origin and Development. Topics include: the history and explaination of pictographs and syllabic writing, direction of the script (as it changed over time), cuneiform in relation to Akkadian and Sumerian languages, historical divisions, the use of various forms of cuneiform throughout history with a timeline, and different forms of numerals (including a few fractions). Tablets and Monuments. Topics include: tablet shapes and sizes, writing stylus, envelope useage, stamp and cylinder seals, monuments and commemorative inscriptions (clay nails, bricks, prisms). Scribes and Libraries. Topics include: scribal training and tradition, colophons, and libraries. The Geographical Spread. Topics include: a description of the use of cuneiform in Eblaite, Elamite, Hittite (Nesian), Hurrian, Urartian, Ugaritic, and Old Persian. (Sumerian and Akkadian are discussed throughout) Decipherment. Topics include: history of decipherment and original examples used to decipher. Sample Texts. Included are guided examples of translated inscriptions. Fakes. Two interesting pages describing qualities of real and fake tablets. This is an excellent book to read before enjoying a museum visit. The price of this book is very affordable because of the size, yet the information presented is well worth the price.

Published by Thriftbooks.com User , 18 years ago
Cuneiform is a type of writing that has been used for at least 15 languages, including Sumerian and Akkadian. Apparently, cuneiform could even be used to relay secret messages in English to your friends. According to Ancient Iraq, by Georges Roux, and Ancient Mesopotamia, by A. Leo Oppenheim, there are more than 100,000 Sumerian and Akkadian tablets written in cuneiform with, for example, 15,000 tables found at Tell Mardik and 25,000 found at Ashurbanipal. However, the book being reviewed (Walker) will does not provide the reader with any sort of start towards the goal of phonetically reading these tablets. Walker's book does reveal a few of the ancient cuneiform letters (pages 12-14), but does not reveal all of these letters, and does not instruct the reader how to string the letters together to form words, aside from an example given on page 56. The author does do a better job with a later form of cuneiform ("old Persian"), and here 36 cuneiform characters are shown. But again, there is little or no attempt at instructing the reader how to read any cuneiform text. An elegant job is done in illustrating various tablets, cyclinders, monuments, envelopes, and prisms, bearing cuneiform script. The photos are large, on glossy paper, of high quality, and generous in number, despite the concise nature of Walker's paperback book. If anything is missing from the pictures, it is a photo of the 1760 BC (71 cm tall) code of Hammurabi, that is, the one with the engraving of Hammurabi and Shamash, god of the sun and of justice. Walker's writing is first rate and comprehensible to the layperson. The author's credentials are appropriate and first rate (employee of the British Museum), and the publisher is Univ. of California Press (Go Bears!). The book provides us with a number of fun facts, for example, the clay envelopes used for inserting clay tablets, e.g., for security purposes, and the fact that Enheduanna, daughter of Sargon, the first king of Mesopotamia, is the first known author in the history of the world. However, the book really needs a second edition, with a full chapter devoted to teaching the reader some of the basic elements on how to phonetically read ancient cuneiform text and/or old Persian cuneiform, along with more examples of pre-translated examples, and exercises for the reader. In its present edition, the book should really be called "Archeology of Cuneiform" or "Concise History of Cuneiform."

Reading the past more easily...

Published by Thriftbooks.com User , 18 years ago
C.B.F. Walker's book on Egyptian Hieroglyphs (part of the 'Reading the Past' series put out by the British Museum in cooperation with the University of California Press) is an excellent primer to the subject of this ancient language. Like the other texts in this series, the book itself is only 64 pages long, which makes the task of learning an ancient writing system like Cuneiform is daunting. Do not be deceived by the low number of pages - there is a wealth of material here.The first bit of information clarifies a misunderstanding commonly held even among scholars - Cuneiform is not a language, in-and-of itself. Cuneiform is a script, a writing tool used by at least 15 different ancient languages (much in the way the alphabet from which you are reading this review is shared among dozens of languages, with minor variations). Walker talks about the origins and development of Cuneiform script out of pictogram writing, placing it historically alongside Egyptian Hieroglyphics, the other major ancient writing system of the Near and Middle East. Walker talks about the history of discovery, up until very recent times, of the different ancient languages which used Cuneiform script. Dating back as far as 3300 BC, writing pre-dates all known major Empires. The idea that the Sumerians invented writing, long held, has had to be revised. Nonetheless, the Sumerians did develop writing, using the Cuneiform script, to a high degree, and this was passed on to the Akkadians and then further afield. Walker makes interesting digressions into the materials and direction of writing as he proceeds with his history of the script. Chapters two, three and four develop the world of the script in further detail. Chapter two looks at tablets and monuments, the media upon which the overwhelming majority of the cuneiform script has survived for us. Chapter three looks at the issues of scribal training, scribal identities (some scribes signed their names, titles, or other identifying markers on their work), and libraries of the ancient world, which were often official storehouses of documents, or private libraries of wealthy individuals. Chapter four shows the widespread geographical coverage of cuneiform, and the different languages over time and place that adopted the writing, such as Eblaite, Elamite, Hittite, Hurrian, Urartian, Ugartic, Luvian and Old Persian. The next final two chapters look at issues of decipherment (Old Persian being among the earliest languages to be deciphered from cuneiform) and gives some sample texts for the reader. This includes explanation of the niceties of professional archaeologists and Assyriologists, such as writing Sumerian texts in lower-case Roman script and Akkadian in italics, etc. This is not a text which teaches one to read or construct cuneiform, but recognition of patterns in basic inscriptions is presented here. The final two-page chapter deals with fakes and forgeries, and to some this may be the most interesting ch

A useful illustrated survey of the cuneiform writing system.

Published by Thriftbooks.com User , 21 years ago
CUNEIFORM by C. B. F. Walker. 64 pp. Volume 3 in the 'Reading the Past' series. University of California Press / British Museum, 1987. ISBN 0-520-06115-2 (pbk.)The present book offers a brief illustrated survey of the cuneiform writing system which flourished in the Ancient Near East between 3000 BC and 75 AD. It covers the development of the script from its earliest pictographic signs, and explains the process which led to cuneiform being used for writing, not only Sumerian and Akkadian, but also many other Near Eastern languages. After a brief Preface, seven chapters follow : 1. Origin and Development; 2. Tablets and Monuments; 3. Scribes and Libraries; 4. The Geographical Spread; 5. Decipherment; 6. Sample Texts; 7. Fakes. The sample texts show us how the cuneiform script is analyzed into words and syllables, and also how to read the names of the most famous kings as found in various inscriptions. Extracts are given from Sumerian texts which describe how scribes were trained, and the many different kinds of inscription they wrote are illustrated.Also explained is the exciting story of the decipherment of cuneiform, and, since original inscriptions can be very expensive and are often faked, a few guidelines for identifying fakes are included for the benefit of collectors. The book is rounded out with a useful summary of the main international collections, 'Where to see Cuneiform Inscriptions,' a short list of books for 'Further Reading' which includes such familiar names as Kramer, Oppenheim, and Chiera, and a handy Index.The book is a large 8vo in size (9.5 by 7 inches), bound in a sturdy decorative wrapper, stitched, and well-printed (though in a rather tiny font) on strong paper. It contains a useful map, and is profusely illustrated with line drawings and with black-and-white photographs of many ancient cuneiform-bearing artefacts such as sculptures, clay tablets, seal impressions, stelae, and so on.All in all, C. B. F. Walker's book is a handy guide, and sturdy enough to be taken along on a trip to a museum or collection to be used as a reference. But given the enormous importance of cuneiform as the vehicle of the most ancient and amazing body of literature that has come down to us, and of the basic civilizational patterns which the modern world has inherited from Mesopotamia and which still govern us, it seems amazing that this should be the only book devoted to a general survey of the subject in English (though there are chapters in others). Although the style in which this book is written might have been a bit livelier, the illustrations are very nice to have, and anyone who is at all interested in cuneiform will find much to enjoy in it. A few other recommended texts follow.For a sumptiously illustrated text on quarto sized pages which gives many large beautiful reproductions of cuneiform, readers are referred to:A MANUAL OF SUMERIAN GRAMMAR AND TEXTS. Second Revised and Expanded Edition. By John L. Haye

Excellent walking-tour of the development of cuneiform

Published by Thriftbooks.com User , 23 years ago
This excellent book, which is one of a series of concise texts dealing with ancient scripts, provides a comprehensive overview of ancient Mesopotamian cuneiform logographs. Helpfully, these are divided into various periods and cultures, spanning nearly three thousand years of the development of the written languages of this "cradle of civilazation." Outside the scope of this book is the basic liguistic philosophy which would place this group of languages in a wider context. Nevertheless, this text will help to open wide the heavy door which seals most of us from the legacy of these pioneers of incisive chronicle and timeless literature. Tellingly, I've been able to employ the tables in this book to aid in the decipherment of inscriptions of Old Babylonian cylinder seals.
Trustpilot
Copyright © 2022 Thriftbooks.com Terms of Use | Privacy Policy | Do Not Sell My Personal Information | Accessibility Statement
ThriftBooks® and the ThriftBooks® logo are registered trademarks of Thrift Books Global, LLC