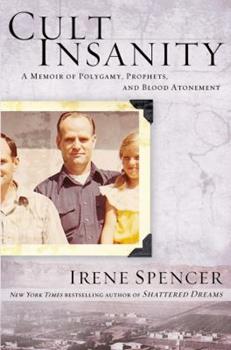 Cult Insanity: A Memoir of Polygamy, Prophets, and Blood Atonement

We receive 24 copies every 6 months.

Life for Irene Spencer was a series of devastating disappointments and hardships. Irene's first book, Shattered Dreams, is the staggering chronicle of her struggle to provide for her children in abject poverty and feelings of abandonment each time her husband left to be with one of his other wives. Irene was raised to believe polygamy was the way of life necessary for her ticket to heaven. The hard knocks of her environment were just the beginning...

Published by Thriftbooks.com User , 12 years ago
As a sociologist with an academic as well as personal interest in this religious phenomenon and having studied the family from the outside, I have to thank Mrs. Spencer for her account. Much respect to this author.

Published by Thriftbooks.com User , 13 years ago
This book was an intense and powerful look at a life I never knew existed. Although the writing was a bit amateurish in some areas, the subject matter and the actual story kept me enthralled with every page. It is the story of Evril LeBaron, the leader of a fundamentalist faction of the Mormon faith. Irene, the author is Evril's sister in-law and lived years in the same compound as Evril, with him being the "Patriarch" of the group. The things Irene describes are terrible and frightening. I am still reeling from this book and I read it over a week ago. I think in saying the writing was a bit amateurish I need to explain myself. I found a lot of areas to repeat themselves and things moved along in a very choppily and it was hard to get a grip on during some parts. Especially during the climax of the book, she explains her way, then another persons view and then another. Either way this book is worth the read, especially if you are interested in cult societies. (Believe me when I say, I know my writing is amateurish, as well)

Published by Thriftbooks.com User , 13 years ago
Here is the true story of Ervil LeBaron, the "Mormon Manson" as told from the point of view of his sister-in-law, Irene Spencer. This is Mrs. Spencer's second book about being a plural wife in the LeBaron cult. I've read her first book, Shattered Dreams, as well. That first one was about her marriage to Verlan LeBaron, her jealousy of being one of ten wives, the depressing poverty they lived in as one man vainly tried to support ten wives and 58 children. In Cult Insanity she discusses the history of the LeBaron cult, how several of the LeBaron brothers believed themselves to be God's prophet on Earth, and how brother Ervil's thirst for power led to murder, violence, and constant fear within the group. Ervil has his followers murder his brother Joel, repeatedly attempt to murder his brother Verlan, murder his own daughter, and kill about 25 people from his death list. The murders went on even after he died in prison as his followers continued to eliminate people from his death list, and then began to turn on one another. It's an amazing story of what can happen when a mentally ill person is able to recruit believers to carry out his evil plans. Now I have read several books about the LeBarons--these two by Irene Spencer, another by her sister wife Susan, and one by Ervil's wife Rena, who killed for him. Despite all that, sometimes this new book was hard to follow. It was hard to keep track of who all the people were and how they were relatd to one another. With all the plural marriages, you'd have somebody married to one woman whose sister was married to that person's father who was also married to the first person's daughter. Very confusing. Some more charts would have been helpful, as well as more explanations. I had the feeling Irene assumed you had read her first book and remembered a lot of people from that book, which I did, but not as well as she assumed. There was one chart that showed Ervil's wives and their many children. It helpfully indicateded which ones were murdered, which ones were in jail, and which ones had killed themselves. A shocking number had died at their own hands. My recommendation is that you read this, because it is fascinating. However, you'll get more out of it if you read another book about the LeBarons first. I read Ben Bradlee's book Prophet of Blood after I read this book. I think it would have been better to read them in the opposite order. I hear that Irene Spencer intends to write more books about her experience with the LeBarons. If she does, I will be certainly near the first in line to read them. It's a fascinating story, but I'm glad I didn't live it.

this book is a must read for Christopher Hitchens, Daniel Dennet, Sam Harris, and Richard Dawkins ,

Published by Thriftbooks.com User , 13 years ago
This book will make you realise what religion has done to hurt humanity in the name of an all loving god , it exposes how gullible people can be , it has to be right up there with Hitchens book, GOD IS NOT GREAT ,I never read such an incredible story, SHATTERED DREAMS by Irene Spencer was a great read, but CULT INSANITY is an incredible and amazing story, that will expose the absurdity of believing in the unknown by faith , pligkid 17
Trustpilot
Copyright © 2022 Thriftbooks.com Terms of Use | Privacy Policy | Do Not Sell My Personal Information | Cookie Preferences | Accessibility Statement
ThriftBooks® and the ThriftBooks® logo are registered trademarks of Thrift Books Global, LLC