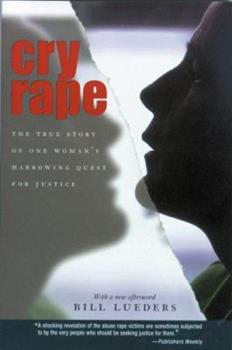 Cry Rape: The True Story of One Woman's Harrowing Quest for Justice

In September 1997, a visually impaired woman named Patty was raped by an intruder in her home in Madison, Wisconsin. The rookie detective assigned to her case came to doubt Patty's account and focused the investigation on her. Using pressure and lies, he got her to recant, then had her charged with falsely reporting a crime. The charges were eventually dropped, but Patty continued to demand justice, filing complaints and a federal lawsuit against...

Published by Thriftbooks.com User , 13 years ago
If this book were fiction, nobody would believe it. Unfortunately, this is a true story. A blind woman, after being raped by a stranger, found herself charged criminally for making a false police report. The lead detective on the case decided the victim wasn't really blind, since she acted like a sighted person during their interview. This is a very emotional and disturbing story to read. What's the point of cooperating with law enforcement as a victim of a violent crime when you can end up being called a liar? In my own city, the rape evidence kits were stacked up going back ten years, so that by the time the DNA was processed, the statute of limitations had expired, and there would be no criminal prosecution, even if a rapist could be identified through the evidence. So what's the point of even bothering to call 911 if they don't work for us as taxpayers and victims of crime?

Haunting journey into my own mirror

Published by Thriftbooks.com User , 15 years ago
As I read this book, I could not stop turning the pages. I read the first 120 pages without getting up. I already knew the end of the story, but I had to read the remarkable journey. This lady opened herself up for such an honest portrayal of the most hideous events of her life to share them publicly and it is truly amazing. Know this, Patty, and Bill for writing it, if for nothing else, I am a life that was touched. My mirror holds much the same story, and the same deals are offered to me. Everything within me says "stand by the truth" - but the truth is so hard when it hurts you. You have given me renewed courage to fight the fight. I will not give in and I will continue to tell the truth. The system has got acknowledge when it's wrong. Thank you both so much.

Published by Thriftbooks.com User , 15 years ago
I sat in stunned silence as I turned the final page of "Cry Rape," Bill Lueders' heart-rending story of a rape victim doubted, and ultimately tormented, by police. My 10-year-old son asked about what I had been reading, saying, "Is it a mystery?" I replied, "No, it's about a lady who was hurt badly in a crime and told the police. Not only did the police refuse to find the person who hurt her, they accused her of lying. Eventually they found the criminal who hurt her but even then, the police didn't help her." His response: "Oh, so it's a horror story." It is the most fitting summary I've yet seen of this tremendous book. Lueders' story unfolds chronologically from the first page, which begins with the shock and terror of a brutal rape. It leads to eventual vindication, but not without further terror and further brutality -- at the hands of police, attorneys and others the victim trusted most. This book must be read not for how it is written though Lueders' dramatic-documentary style makes the story impossible to forget. It must be read because it shows us how our most vulnerable citizens can be further victimized by the very systems designed to help them. In short, it is a morality tale that highlights the immorality of the institutions many of us trust.

Published by Thriftbooks.com User , 15 years ago
Cry Rape is the story of a rape victim's victimization by the criminal justice system. It is a story about a cop who seems predisposed to "prove" rape victims liars, about a police department that protects bad cops, about a district attorney's office willing to further victimize the victim to protect bad cops, about judges willing to interpret the law in ways that protect bad cops and bad policies, about elected and appointed officials who stand behind the victimization, and (though only peripherally) newspaper editors who don't seem to care. It is also the story of one woman's heroic and uphill fight against the system and the small group of people who believed and supported her and were sometimes victimized as a result. Conversations in Cry Rape, suggest that the majority of rape victims choose to walk away and admit defeat rather than standing up to a criminal justice system that is more interested in closing their file than helping them find justice. This victim's inner strength makes her story the exception. This story takes place in Madison, Wisconsin, long perceived to be a bastion of progressive ideas. But Cry Rape exposes the plain fact that Madison's government can be as self-serving and self-protective as governments anywhere. The central story is the rape victim's years-long ordeal; but the strong secondary story is the way the system deals with a cop who shouldn't be a cop. He is rewarded and remains today an honored officer. In spite of the ugliness exposed in Cry Rape, it does offer us a spark of hope. It shows that investigative journalism can make a positive difference and that there are some reporters and editors willing to stick with a difficult story. We learn that there actually are honest attorneys who seek justice for their clients instead of just clocking billing hours. Readers unconnected to Madison or Wisconsin will be entertained by Cry Rape's distinct detective novel feel and the twists and turns that lead to surprising discoveries throughout the story. Alert, informed readers might find similarities between the way Madison's city government and the University of Wisconsin, Madison deal with liars and bad apples. Promoting such people seems to be the Madison Idea.
Trustpilot
Copyright © 2022 Thriftbooks.com Terms of Use | Privacy Policy | Do Not Sell My Personal Information | Accessibility Statement
ThriftBooks® and the ThriftBooks® logo are registered trademarks of Thrift Books Global, LLC