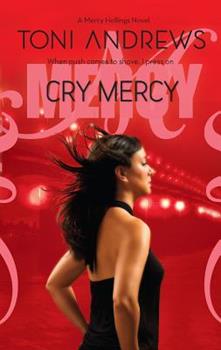 (Book #3 in the Mercy Hollings Series)

I just want a normal life...even if I'm not entirely sure I'm human. My name is Mercy Hollings and I'm a successful hypnotherapist in Balboa, California. The problem is, my good fortune is dependent on a dark secret. I can make people do whatever I want using telepathy, a power I call "the press." And that ability has hurt some people I never wanted to hurt, so I try to keep it under wraps. I also try to keep people at a distance...at least, I used...

Published by Thriftbooks.com User , 13 years ago
In this third installment of the excellent Mercy Hollings series, Mercy, a psychic who can "push" people to do her will, faces her 30th birthday, a startling revelation about her ruined childhood, and dangerous confrontations with street gangs. Tino, leader of a powerful local gang, has been trying to go straight with the help of some of Mercy's friends. To finally release himself from the Hombres Locos, he must negotiate a delicate deal with not only his own gang, but the leaders of several other gangs in the region. He recruits Mercy to help him "hypnotize" the other leaders into agreeing to his terms that will free not only him, but his reluctant little brother. Andrews is a master of teasing out little bits of information on the long arc (Mercy's origins), and giving us a great story for the immediate arc. None of her characters are dull, and Tino is one of the best. In Cry Mercy, we learn about Tino and his family, meeting some interesting new faces along the way. Mercy's integration into "normal" life-a life with friends-continues, as she reluctantly accepts a 30th birthday party from Sukey, and quietly deals with Sam's continued presence in her life. She has been forced to trust some, and is learning to trust others. I continue to be absolutely taken with this series, and cannot recommend it highly enough.

Published by Thriftbooks.com User , 13 years ago
Mercy Hollings is one of the most interesting characters I've met in a while, constantly struggling to control her ability to press people into doing what she tells them. Rich setting, wonderfully varied characters, great dialogue and a really likable and flawed heroine make the Mercy series a home run.

Published by Thriftbooks.com User , 13 years ago
In the Balboa Peninsular of California hypnotherapist Mercy Hollings has the mental ability to "press" people into doing what she wants them to do using her mind to coax a person. She has always struggled to control her ability because she knows it is not ethical to intrude even when you want to. Her friend Sukey has been helping her look back on her life while moving near the ocean has provided her with some solace. Mercy wants to know why her adoptive parents eventually abandoned her. At the same time she wants to help former gangbanger chief Tino who wants to become a realtor. Tino also needs Mercy to help get his younger brother out of the gang lifestyle, but not all the punks are normal members as some come from the dark places where souls dare not go. CRY MERCY is as always with this saga a fun but odd paranormal Mercy Hollings thriller (see BEG FOR MERCY and ANGEL OF MERCY). The story line is fast-paced but owned by the heroine who rips skin with her sarcastic retorts. Fans will enjoy the latest antics of Mercy as Toni Andrews provides an amusing refreshing beach fantasy. Harriet Klausner

Published by Thriftbooks.com User , 13 years ago
I like Toni Andrews 'Mercy' series and her latest "Cry Mercy" had me glued to the pages. This isn't really a romance, per se; there are romantic elements, but this is essentially the story of a woman with unusual abilities living her life. Her differences and the reactions of people in her past have caused her to close herself off. Recent experiences though, have brought her into contact with people-some with special talents, some without-and she's learning that EVERYONE is different in some way. So although this series so far has centered on her growing talents and her struggle to use them without abusing herself or others, for me it's just a fascinating series of stories about someone struggling to be themself and be happy...and find love of course. Mercy works as a hypnotherapist, very convenient since she has the ability to 'push' her wishes on others. Her work gives her the opportunity to use those talents to help others and keep the talent from escaping her control. Recently, she's noticed some changes in her talent and that's not necessarily a good thing. She's also become involved with a group of 'friends', very different for the loner Mercy's always tried to be. But now having friends means trying to help them, and somehow Mercy has become involved in trying to save a friend and his younger brother from continued life in a gang, but to do that she'll have to use her 'push' in ways she's never tried before. Mercy also delves into her past; trying to discover more about her birth parents and prove, once and for all, if she's really human...or something more. If you've not read any of the Mercy books, I wouldn't suggest beginning here--you'll miss alot of the changes in Mercy's life that make each book so engrossing. Toni Andrews' style of writing works well as Mercy tells her story in the first person and let's us peer inside her mind and her struggles in using her ability without crossing the moral boundaries she's set for herself. That personal touch of being inside Mercy's head is part of what makes this such an 'unputdownable' series. Like I said, not exactly your normal romance. More of a fantasy with light romantic elements, mystery, and some action. Or maybe just the story of an unusual woman...or you could always read it and decide for yourself!

Best of the series

Published by Thriftbooks.com User , 13 years ago
Toni Andrew has done it again. Although I loved all of the Mercy series, in this, the 3rd, the characters have peaked in development and the well- researched plot involving street gangs was informative and intriguing. Couldn't put it down!
Trustpilot
Copyright © 2022 Thriftbooks.com Terms of Use | Privacy Policy | Do Not Sell or Share My Personal Information | Accessibility Statement
ThriftBooks® and the ThriftBooks® logo are registered trademarks of Thrift Books Global, LLC