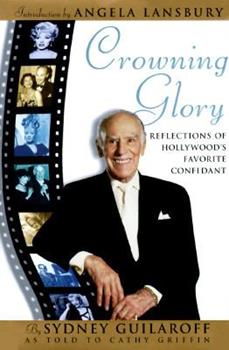 The head hairdresser at the MGM studios since 1935 offers an insider's look at Hollywood's Golden Age, recounting his rise from rags to riches, his affairs with Greta Garbo and Ava Gardner, and his... This description may be from another edition of this product.

crowning glory is a crowning pleasure

Published by Thriftbooks.com User , 13 years ago
while the author doesn't 'dish the dirt', he tells an interesting and historical view of the hollywood that was (and never to be seen again). once upon a time ago, making movies and the land within was controlled by a few large studios operating under a studio system. who would know about the nitty gritty details of such a life and business but a person who worked within during the studios' highs and lows. see, you needn't tell all the family secrets to tell a good story but rather telling it as it was, at least through the eyes and ears of someone who was in the center of it all.

Published by Thriftbooks.com User , 21 years ago
While being well written, Sydney Guilaroff's autobiography reveals him either as someone with perfect timing or one who brings bad luck to others. He was with Joan Crawford at her sickbed when she won her Oscar for Mildred Pierce, he spoke with Marilyn Monroe the night she died and recommended she take a Nembutal!, he ran into Lana Turner after she had purchased the knife that would kill Johnny Stompanato, he was with Elizabeth Taylor for her emergency tracheotomy, and he spoke with Judy Garland and Princess Grace of Monaco before they died. This kind of opportunism existed even before he became the head of MGM's hairdressing and makeup department from 1934, when as a novice he styled Louise Brooks' hair into her signature bob, and then at Saks New York was visited by Claudette Colbert and Joan Crawford. It was Crawford who helped bring him to Hollywood, since she insisted on visiting him for each film and Mayer resented her absence, though he also considered the coiffures worn by his female stars to be lacklustre. However Sydney had differences with Mayer, refusing to be signed to a contract and he quit after one argument, only to be brought back with the promise that he would have no dealings with the studio boss. Guilaroff's insider view of MGM makes him an informed source on Crawford leaving, where he says she left volantarily, and Garbo effectively fired after the failure of Two-Faced Woman. He perpetutates the myth that Judy Garland's recordings for Annie Get Your Gun were mediocre (proven to be wrong by their modern day commercial release) and provides the disparate and shocking tale of her drug-induced incapability even during her Summer Stock Get Happy return to work after she had lost the weight she had carried during production. The story of Judy performing the number perfectly in one take as soon as the music started is either evidence of her impulse to entertain or proof of Guilaroff's fabrication. Garland's drug-taking are about the lowest he is willing to stoop, though Irene Dunne's deliberate request for retests so that she could earn more money is catty. We learn Garbo was an insomniac, Cary Grant a depressive, though it's a surprise that he doesn't rationalise Montgomery Clift's drug-taking during Raintree County as a post-accident necessity considering he picked up on Garland's addiction the first time he met her. Guilaroff isn't shy about his accomplishments and credits himself with colouring Shirley MacLaine, Ann-Marget and Lucille Ball their red hair colours, providing Marlene Dietrich with a non-surgical facelift which used hooks in a wig to stretch her skin taut, and suggesting Garland wear the fedora for Get Happy since she had pulled out all her hair. He also attributes non-hair related suggestions, like the all over the face kissing Garbo gave Robert Taylor in Camille, directed Marilyn's test for The Asphalt Jungle, recommended Richard Burton for Cleopatra, and defended Lena Horne from the commissary racism. He also, p
Trustpilot
Copyright © 2022 Thriftbooks.com Terms of Use | Privacy Policy | Do Not Sell or Share My Personal Information | Accessibility Statement
ThriftBooks® and the ThriftBooks® logo are registered trademarks of Thrift Books Global, LLC