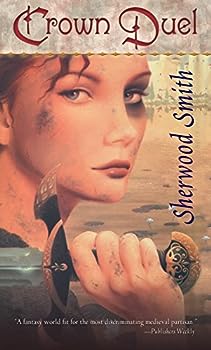 (Part of the Crown & Court Series)

This description may be from another edition of this product. Meliara and her brother promised their dying father to free Renalna from a bad king's oppressive rule and to preserve the vital Covenant with Renalna's aloof, inhuman Hill People. Meliara, the...

A masterpiece, and a must-read

Published by Thriftbooks.com User , 15 years ago
This is easily my favorite book. I first read it in early high school and now, at the end of college, get just as much if not more out of it with every re-read. It combines a vivid, original fantasy world with realistic sociological and political portrayals and analyses, absolutely fascinating to any sociology or political science major. Neither the magic nor the romance overpower this book; the romance is fulfilling even while the book focuses on more important themes. The most fascinating part of this book, however, and what brings me back to read it over and over again, is the heroine, Mel. She makes real mistakes, misinterprets practically everything, and is driven further into trouble by the very ignorance she strives to rid herself of. Mel is as real to any young adult (or anyone who remembers that age) as any heroine ever written. I can't count how many times I've read of her mistakes and winced myself in sympathy, knowing I've made the same mishaps and showed identical character faults. Anyone who enjoys realistic fantasy with a dash of romance and sci-fi will adore this book.

Published by Thriftbooks.com User , 16 years ago
I'm not going to write a summary of this book, because plenty of other reviewers have. All I want to say that this is now my absolute favorite book! I finished reading it three hours ago, and I still can't stop thinking of it or get rid of my excitement over it. This book has everything--from an evil king, a rebellion led by a poor teenaged countess, and several captures and escapes of that same countess, who leads soldiers across the country playing tricks on them along the way; to the confusion and deception of court life, and a romance with the mysterious Marquis of Shevreath. Well...I guess that was somewhat of a summary, haha, oh well! All I can say is that I'm pretty certain that ANY girl would absolutely love this book, and I recommend it more than any book I've read before.

A Great Read for Anyone!

Published by Thriftbooks.com User , 16 years ago
Wow. I got this book for Christmas and I could not put it down! From the very beginning Smith hooked me with the way Mel was a Countess in a crumble-down castle, and she was fighting the good fight with no other noble to help her. Mel's brother is nice, but he doesn't understand her. The one person who understands her is her so-called "enemy," Shevraeth. He was sent by the king to put down her uprising. I'm not going to give the whole book away, so let me just say that this has something for everyone. Girl tries to kick butt, but finds it is harder than it looks. Then she's a captive, and running from the bad guys. Later, she is playing a game of deception and secrets when she goes to court. And, last, but definitely not least, she falls in love. I love the way Sherwood Smith's characters are all well-developed, no matter the role they play in the book. I am amazed and gratified at the incredible job she did.

Published by Thriftbooks.com User , 18 years ago
I don't really see a point in describing Crown Duel and Court Duel since other people already have, and I'm always afraid I'll spoil something. But anyway, Crown Duel is the best book I've ever read! And I read all the time! lol. Seriously though, this is the best book ever. I couldn't even decide which part was better. Court Duel has the best romance in it I've ever read. It's not in your face like it is in other books, but its subtly woven into the plot to make it so much sweeter and perfect! I love all the characters in this book and reread it all the time! I can't get over how good it is! I only wish I could give it a 1000 stars! I hope everyone will read it! The only bad thing that would come of you reading this is becoming an obsessed freak like me! ..Thats not a bad thing though! Just do me a favor and read this book! And spread the word! You're seriously depriving yourself if you don't read this! Weelll ok bye!

Published by Thriftbooks.com User , 18 years ago
This novel is now on my recommended reading list for junior high and high school readers. It's exciting, funny, heartwarming, concerns moral choices without being at all didactic, and most of all is full of adventure, with females getting to buckle swashes as much as the males. The prose is excellent, and the world is complicated, hinting at stories on the "edges," which I trust means the author has more stories to tell.The social setup is fascinating, though at times it might be a challenge for the younger reader who is not familiar with historical contexts from which the novel is drawn. The adult reader, on the other hand, might wish for more details about government, policy, and some of the older people in the book--the things young readers don't really want in their adventures.It also addresses the pitfalls of attraction without going into inappropriate detail--which is very rare these days.
Copyright © 2020 Thriftbooks.com Terms of Use | Privacy Policy | Do Not Sell My Personal Information | Accessibility Statement
ThriftBooks® and the ThriftBooks® logo are registered trademarks of Thrift Books Global, LLC