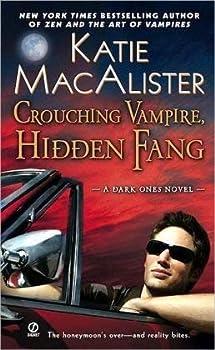 This description may be from another edition of this product. For a woman married to the vampire of her nightmares, the honeymoon's over- and reality bites... Pia Thomason is torn between two Dark Ones: her husband Kristoff-who doesn't trust her-and his best...

Published by Thriftbooks.com User , 12 years ago
Zen and the Art of Vampires: In Zen and the Art of Vampires Pia is in search of her dreams. She has always wanted the husband, kids and the house in the suburbs but as she is turning forty she is losing hope. So Pia gives herself the present of a singles tour through romantic Europe as a present. The only thing is the guys on the trip leave a lot to be desired. But the two men she sees on the Icelandic street are different; they are handsome, mysterious and dangerous. But, they are obviously not for her. So she is surprised when things take a turn and she ends up involved with Alec, then married to Kristoff. If that was the extent of her issues it wouldn't be bad but someone is mysteriously killed in her bathroom and now she seems to be a Zorya (and just what the heck is that), and has spirits following her around. Oh and her husband apparently is a Vampire, who would have guessed. Crouching Vampire, Hidden Fang picks up after Pia is back in the states. She is alone and is torn between both her new job as Zorya and her husband Kristoff (who doesn't seem to want anything to do with her). So while Pia in one way has finally got what she has wanted out of life - being married, her husband not only doesn't want her but the vampire council thinks they have conspired against the Dark Ones and now she is going to have to see Kristoff face to face. Things change when Kristoff and Pia meet face to face again and she is determined to make things work with him, even if it kills him. How did one woman end up with ghostly charges, a vampire husband and people out to kill her? More importantly can she make the best out of the situation and possibly keep the new husband and new friends? These two stories have been reviewed as a pair as at the end of Zen and the Art of Vampires, Pia does not have her happy ever after ending, as a matter of fact most of the characters won't be happy until everything works out at the end of Crouching Vampire, Hidden Fang. That being said, I think this is a fantastic duo of stories from Katie MacAlister. I have loved her work from reading her first historical romance to her contemporaries and now her dragons and vampires, and have never been let down. She continues to write strong and super spunky characters that women will love to read about. If you are a fan of Mary Janice Davidson's Betsy series than I think you will definitely enjoy Zen and the Art of Vampires and Crouching Vampire, Hidden Fang. Tanya Reviewed for Joyfully Reviewed

Published by Thriftbooks.com User , 12 years ago
Pia Thomas has landed herself in the oddest situation. She is now the wife or, as the vampires say, the beloved of a vampire named Kristoff. She never planned to be his beloved, she planned on being the beloved of his best friend Alec but accidentally got Kristoff instead. Now she finds herself adjusting to life with a vampire husband. One that is deliberately keeping away from her and one that had a lover before her that he still mourning. So, Pia goes back to her life in Seattle determined to forget Kristoff but, of course, fate has other plans - deadly plans and plans to get Kristoff and Pia back together perhaps for good or at least before the bad guys kill them. With time running out can Pia find who wants to frame her for murder before time runs out? What began in the Zen and the Art of Vampires continues in Katie MacAlister's Crouching Vampire, Hidden Fang. I love the fast-paced action in this novel. The humorous blend of romance and danger makes this novel a real page turner. Pia is confused still, she is growing into her powers and finding all kinds of things are not what she thought. Who knew one singles cruise could cause this much trouble? Kristoff is still mysterious and broody but Pia has cure for this. But the heat level he brings to a story is just breathless. Crouching Vampire, Hidden Fang is not however a stand alone, I really enjoyed this novel more by reading Zen and that Art of Vampires first and I think you will too. Knowing the back story helps this novel make sense and both novels are amazing reads you will not forget. I look forward to the next Katie MacAlister novel in the future - they are keeper shelf worthy!

Published by Thriftbooks.com User , 12 years ago
CROUCHING VAMPIRE HIDDEN FANG KATIE MacALISTER Paranormal Romance NAL Rating: 4.5 Enchantments Pia Thompson now knows she is the beloved of Kristoff. Problem is, is that she's still technically married to Mattias from the brotherhood and she is still a Zorya. Pia also knows that Kristoff does not want anything to do with her and He has shut off their telepathic link leaving her alone with her thoughts, and her heartache. Pia is back in the United States trying to get her life back to some sort of order. Her good friend Magda and her boy toy Ray are flying to visit her in the hopes that they can cheer her up. They are not the only ones who come visiting Pia. The Brotherhood is trying to get her to act like the Zorya she is and the Dark Ones keep sending a messenger. Pia realizes the way to stop all her unwanted visitors is to travel back to Kristoff and clear up things once and for all. If she can free some of the captured Brotherhood members then the Brotherhood will release her from her Zorya duties. When she shows up at the meeting of the Dark Ones she realizes things are not as she imagines. Her and Kristoff are being accused of kidnapping and possibly murdering Alec her ex-Dark One lover. So now Pia must find Alec or who took him so she can clear her and Kristoff's name and maybe finally things can go back to normal. But when you are beloved to a Dark One things are never normal. CROUCHING VAMPIRE HIDDEN FANG is the fantastic follow up to ZEN AND THE ART OF VAMPIRES! Mrs. MacAlister leaves us with the unknown fate with Pia and Kristoff, at the end of ZEN AND THE ART OF VAMPIRES and CROUCHING VAMPIRE HIDDEN FANG picks that fate up. Pia is my favorite heroine out of all of Mrs. MacAlister's stories. I find she is the most likable because she is not the kind of gal that just goes along with things because she is told to. She has an opinion and vocalizes it. She is also not very far from one of the best sidekicks, Magda and her beloved Ray. The two of them are a hoot. My only complaint is the interaction between Pia and Kristoff. In the first book the two of them seemed very awkward around each other and almost seemed to dislike each other. And while I understand that is not the case anymore I think it was still a bit early to have them be all lovey dovey. I wish they still had some of that stubborn attitude. I think that this series is not going to follow the normal Dark Ones series and be one book per couple but I think that this will be an ongoing series like the Aisling Grey series, which is just perfect in my opinion! Although the concept of the Dark Ones is very easy to understand and the books do not really need to be read in order, I do say that readers should first read ZEN AND THE ART OF VAMPIRES because that is specifically about these characters in the book. I am keeping my fingers crossed that Mrs. MacAlister will write a number three to this series as it is one of my favorites so far. CROUCHING VAMPIRE HIDDEN FANG is not a boo

Just what I was hoping for.

Published by Thriftbooks.com User , 12 years ago
This book was exactly what I've come to expect from Katie MacAlister. Funny and hot, with a touch of angst. I don't like to give spoilers in reviews, so I won't here. I'll just say that if you like Katie Mac, you'll like this book. If you don't like her, what the heck's wrong with you??

Published by Thriftbooks.com User , 12 years ago
How quickly her world changed without her consent while she was in Europe. Pia Thomason is now the magical Zorya of the Brotherhood whose reason for living is killing Dark Ones and married to her beloved Kristoff the grumpy Dark One though they reside on separate continents with her in Seattle and him in Europe; she knows her spouse distrusts her as she works for his enemy. The Moravian Council accuses the couple of murder, embezzlement, and being behind the disappearance and probably homicide of Dark One Alec Darwin. Before she met Kristoff, Pia thought she loved Alec; which only angers her grump of a spouse. As they team up to search for the missing Alec and learn who framed them, Pia plans to enjoy her time with Kristoff while he cannot resist her lure. As with the first Dark Ones saga (see ZEN AND THE ART OF DRAGONS), nothing goes right for the heroes as not only is the honeymoon over before it began, their lives may be over too. The story line is fast-paced, filled with humor and action as Katie MacAlister balances the two nicely. Fans will enjoy this enjoyable investigative urban romantic fantasy thanks to the antics of Pia. Harriet Klausner
Copyright © 2020 Thriftbooks.com Terms of Use | Privacy Policy | Do Not Sell My Personal Information | Accessibility Statement
ThriftBooks® and the ThriftBooks® logo are registered trademarks of Thrift Books Global, LLC