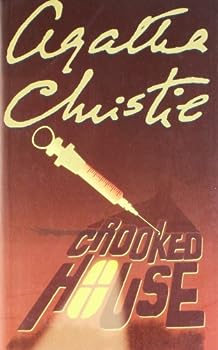 by Agatha Christie and Dave Williams

An exclusive authorized edition of a classic Agatha Christie thriller revolving around a devastating family mystery, described by the Queen of Mystery herself as one of her favorites of her published... This description may be from another edition of this product.

Christie and Fraser- a combination made in Heaven!

Published by Thriftbooks.com User , 14 years ago
Crooked House is supposedly one of Christie's top two favorite books and I can see why. Filled with interesting characters, suspenseful twists and a myriad of suspects, Crooked House does not disappoint. On top of that, Hugh Fraser is the best at capturing each character and giving them life. Loved this one!

"A female Bluebeard--cribbed from 'Arsenic and Old Lace'--"

Published by Thriftbooks.com User , 16 years ago
Like other reviewers I admire CROOKED HOUSE for its claustrophobic plot and the audacity of its payoff, another variation on Christie's famous "least likely person" gambit. But even if you know going in who did it, it's still an intriguing read. This time around I noticed, for the first time, how very deep Christie's cultural specificity ranges. Usually we think of her as light reading, sort of fluffy, but CROOKED HOUSE is oddly stuffed with allusions to all sorts of bodies of knowledge. Hardly a page goes by without a definite reference to some other book, myth, piece of music, popular song, TV program, or what have you--the sort of brand name precision Stephen King is famous for. I hadn't really noticed it in Agatha Christie before, but check it out. One suspect, Magda, is compared directly to a real life actress. "For the first time I was aware of the charm of her delightfully tip tilted nose. I was faintly reminded of Athene Seyler." Athene Seyler! Not exactly, even in 1948, a particularly well known star. It's not as though Christie wrote "Garbo." No, she meant to characterize Magda more precisely by alluding to La Seyler. Never a huge star, she was 50 in 1948, far from slim, a sort of Kathy Bates type perhaps, equally at home on the stage as on the screen. In the CROOKED HOUSE, the references continue: one victim was painted by Augustus John, a painter whom Christie saw as the epitome of modernism, another by John Singer Sargent, perhaps her example of an outmoded genteel tradition. Magda and her son, Eustace, are glimpsed in a family pose, and Charles thinks it looks very like a portrait by Gainsborough. Magda recalls a scene from THE VOYSEY INHERITANCE, Granville Barker's 1905 melodrama recently updated by none other than David Mamet! Famous murderers of the past are invoked, most notably Edith Thompson and Constance Kent. Charles agrees to play "Watson" to young Josephine's "Sherlock Holmes." And there's a lot from Shakespeare and the Bible: the "mark of Cain," for one, and "this side idolatry" (Ben Jonson speaking of his love of Shakespeare). Poetry is everywhere. We are reminded that Henry the VIII was in fact a poet too, writing verse to Anne Boleyn. Christie alludes to Chaucer and Colerudge as well. But it's not just the work of the canon that you need to know in Agatha Christie, there's pop culture too, for one of the suspects is an avid listener to the "Brains Trust," a popular UK radio show of the postwar period. Then there's all the history lessons! "The drama of Thermidor," writes Christie, regarding the French Directoire, "the decree of outlawry against the Robespierrists, the magnificence of Barras, the cunning of Fouche--Napoleon, the half-starved young gunner lieutenant." Suffice it to say if you don't know your French Revolution you will never guess the ending. Perhaps my favorite character is Clemency--the steely wife of Roger, the woman who helped develop the atomic bomb and thus, we suspect

Published by Thriftbooks.com User , 21 years ago
Most of Christie's mysteries offer startling solutions, but few are such complete jaw-droppers as the solution found in CROOKED HOUSE, which is as unexpected as it is inevitable. The story of an eccentric family smothered by a rich and wiley patriarch who meets with unexpected death, CROOKED HOUSE relies largely on character and atmosphere for effect. These are not elements one normally expects from a Christie mystery--but not only does Christie deliver them here, she does so without allowing them to overshadow one of the craftiest puzzles in her career. Prepare to read the novel in one sitting: you won't be able to put it down.

And They All Lived Together In A Little Crooked House

Published by Thriftbooks.com User , 21 years ago
Having read all of the Agatha Christies at least twice, I can honestly say that "Crooked House" is my very favorite. One reason is that Agatha Christie does in this novel what she does best---gathers an extended family all under one roof, allows one of the family to be murdered, and shows quite clearly that all the others had motive and opportunity. "Crooked House" is an excellent story of a complex family. The patriarch is Aristide Leonides, a Greek who has come to England and made a fortune in the restaurant and catering business. His mansion is home to his two sons, two daughters-in-law, three grandchildren, his first wife's sister, and now to his young and beautiful second wife plus the grandchildren's tutor. When the wealthy old man is poisoned, the reader learns that everyone had not only a motive but also an alibi. The characterizations are wonderful and the characters stand out as some of Mrs. Christie's most memorable ones.The usual detectives are absent in this one, but the detecting is in the capable hands of Charles Hayward, the son of a Scotland Yard detective and the fiance of Aristide's granddaughter Sophia Leonides. When the blood-chilling ending occurs, one is shocked and yet, on careful reexamination, must admit that all the clues were clearly there. Curl up with a cup of cocoa (unpoisoned, of course) and enjoy this classic crime with one of Mrs. Christie's most spectacular and unforgettable endings.

Published by Thriftbooks.com User , 22 years ago
This is one of the Christie books I remember reading as a child. When I reread it recently, I was amazed at how superb it is - it is not a Poirot or Miss Marple mystery, not at all, but it is a very different type of mystery. The shocking solution is in fact a brutal attack upon our own culture, our obsession with murderers and murder, and the inexorable impartiality of evil - it is a very frightening book, largely because it does not follow ALL the strictures one expects of a murder mystery. A novel as well as a whodunnit as well as a psychological study. And a grand success.
Trustpilot
Copyright © 2022 Thriftbooks.com Terms of Use | Privacy Policy | Do Not Sell or Share My Personal Information | Accessibility Statement
ThriftBooks® and the ThriftBooks® logo are registered trademarks of Thrift Books Global, LLC