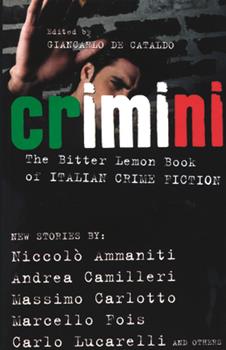 Praise for the authors: "Niccol Ammaniti has written a deft masterpiece without a false note."--Michel Dibdin, Guardian "The Italy of Massimo Carlotto is a different world entirely, a dangerous setting for serious crimes committed by cruel men."-- The New York Times "Andrea Camilleri writes with such vigor and wit that he deserves a place alongside Donna Leon, along with the additional advantage of an insider's sense of authenticity."-- The Sunday...

Uneven collection but still worth it

Published by Thriftbooks.com User , 13 years ago
This Bitter Lemon Press collection of "Italian noir" short stories has gems of mystery, atmospheric description, and wry humor. Any reader will likely find a few stories that don't work for them but if inclined to this genre, and the Italians are good at it, there's plenty of entertainment here. As an aside the best Italian writer published by Bitter Lemon is not represented here, and that's Gianrico Carofiglio. His work is half noir, half courtroom drama, and it's a definite cut above the straight noir, even when compared to the estimable Andrea Camilleri.

Published by Thriftbooks.com User , 13 years ago
"Crimini" is a highly intelligent, dark and often very funny collection of short stories by some of Italy's very best crime writers. If you haven't read any of the increasingly available Italian mysteries now in translation and on the American market, this book would be a great introduction to this wealth of clever writing and amazing talent. The opening story in this collection is "You Are My Treasure Chest" by Niccolo Ammaniti and Antonio Manzini, which revolves around a drug-crazed cosmetic surgeon's attempt to recoop a valuable stash of cocaine from a creative hiding place. This story is totally off the wall and wildly hilarious while ultimately tragic for most of its principal characters. The great writer, Andrea Camilleri, well-known and beloved for his Sicilian crime series, has contributed "A Series of Misunderstandings" to the book. This is a dark and clever tragedy that will make you want to read more from the author. "The Boy Who Was Kidnapped by the Christmas Fairy (A Noir Fairytale)" is another grand romp that delivers a a cast of funny losers that you can't help rooting for and provides a delicious ending, that askews the more familiar cynicism of Italian writing. This story alone is worth the price of the book. There is plenty more great reading in this collection. A lot of fun!

nothing bitter about it...

Published by Thriftbooks.com User , 13 years ago
this collection of short stories combines the best of Italian crime fiction with the real sense of place that Italian literature can convey. While enjoying the vagaries of criminal minds, you'll feel you're sitting in the trattoria down the street.

Published by Thriftbooks.com User , 13 years ago
You'll get your money's worth with this book, which traveled with me and was a welcome companion during airline delays. One of Andrea Camilleri's stories is included, and his Inspector Montalbano mysteries are some of my favorite crime novels. But each of these short stories has its own charm, and if you enjoy the crime fiction genre, this book should entertain you quite well.

Published by Thriftbooks.com User , 13 years ago
Italian crime fiction has been gaining a higher profile in the English-reading world in the last five years, and this anthology (originally published in Italy in 2005) showcases all the big names (except Giancarlo Carofiglio), plus a few who've yet to previously appear in English. In his introduction, editor and contributor Giancarlo De Cataldo identifies three themes that unite the nine stories: corruption (financial and moral), foreigners (recent waves of immigrants), and obsession with success and fame. The first of these is rather obvious -- pretty much all crime fiction involves moral corruption. The second theme is rather more interesting and distinctive, although the stories here tend to incorporate immigrants from elsewhere in Europe, and not the African or Middle Eastern immigrant population. The third theme is also somewhat unusual, as these stories feature more entertainers, politicians, and glory-seekers than the average crime anthology. The first story, Niccolo Ammaniti (known outside Italy primarily for the novel I'm Not Scared and its film adaptation) and Antonio Manzini's "You Are My Treasure Chest," is a good example. It features a coke-addled, panic-striken plastic surgeon to the stars who, in the midst of a boob job, hides his baggie of cocaine inside the starlet he's operating on. This outsized premise is the catalyst for several years of misadventures in which he attempts to retrieve this "nest egg." It's kind of a goofy, ridiculous story, but colorful enough to engage readers open to that kind of crime story. Sandrone Dazieri's "The Last Gag" and Giorgio Faletti's "The Guest of Honor" also revolve around the lifestyles of the rich and famous. In the former, a former TV comedian comes to realize his former partner was murdered, and inadvertently solves the case. The latter features a tabloid journalist who thinks he's hit paydirt by locating a long-missing TV star -- however following this story also means tangling with the devil... Most of the other stories are more conventional, such as the second, Carlo Lucarelli's (whose post-WWII De Luca Trilogy is well worth seeking out) "The Third Shot." The only story to feature a female lead, it revolves around a policewoman who suspects a well-known fellow officer of lying about an armed confrontation with two Albanian thieves, and the fallout her suspicion engenders. Another cop-centric story is Massimo Carlotto's "Death of an Informer," which pits a tenacious cop against a ring of Croat soldiers turned drug smugglers. Probably the most old-fashioned story is Marcello Fois' brief "What's Missing," in which a nice old lady is killed and a police detective must sift through a few clues to identify the killer and his motive. The other three stories are somewhat more personal. The title of Andrea Camilleri's (author of the long-running Inspector Montalbano series) "A Series of Misunderstandings" is perfectly apt, as an unlikely couple falls in love and when she is killed, he must s
Copyright © 2022 Thriftbooks.com Terms of Use | Privacy Policy | Do Not Sell My Personal Information | Accessibility Statement
ThriftBooks® and the ThriftBooks® logo are registered trademarks of Thrift Books Global, LLC