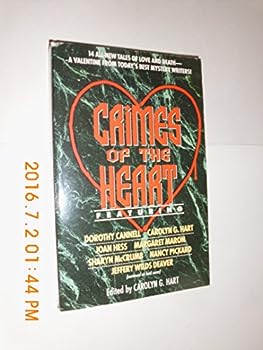 Crimes of the Heart

These 14 original stories of love and death are the perfect valentine for the mystery reader--a collection that includes such stellar contributors as Nancy Pickard, Joan Hess, Margaret Maron, Jeffery Wilds Deaver, Lia Matera, Susan Dunlap, Sharyn McCrumb and many more.

Published by Thriftbooks.com User , 12 years ago
Like Carolyn G. Hart's second anthology (LOVE AND DEATH, 2001), this volume suffers from a serious quality-control problem. Furthermore, despite its title and its claim to contain "14 original tales of love and death," several stories in CRIMES OF THE HEART have little or nothing to do with crimes or with death. As a simple overview, let me say I would give letter grades of "A" to four stories, "B" to five stories, "C" to three stories, and "D" to two stories. Among the factors considered are the authors' cleverness and originality, their ability to pace themselves and stay on track, the appropriateness and vividness of the styles in their narration and dialogue, and the plausibility of the various characters and events within their stories. Four A's: Dorothy Cannell's "Cupid's Arrow" is an excellent Kiplingesque character disclosure story which may--or may not--have a supernatural component in it. Barbara D'Amato's "Hard Feelings" is a good test-your-wits puzzle tale about a policewoman and her partner providing opposite testimony about a fire victim. Jeffrey Deaver's "Together" is a skillful suspense story, whose outcome will probably surprise most readers. Joan Hess's "All That Glitters" is a clever comic crime tale that shows how two wrongs can sometimes make a right. Five B's: Susan Dunlap's "A Contest Fit for a Queen," an amusing puzzle story about "spousal clutter," lets readers try to solve it fairly, but has a tiny flaw involving the word "collar." Lia Matera's "Do Not Resusicate" is a skillful, sad, unpleasant story of a wife with a bad self-image. Sharon McCrumb's "The Matchmaker" is an unrealistic but clever tale about a special kind of dating service. Nancy Pickard's "Valentine's Night" is a clever "premise story" (What if a pair of people whose spouses are cheating on them get together for revenge?). Marilyn Wallace's "Advice to the Lovelorn" is a good suspense story, whose ending some readers will enjoy even if they correctly guess it halfway through. Three C's: P. M. Carlson's "The Rosewood Coffin; or, The Divine Sarah" is implausible historical fiction involving Sarah Burnhardt, narrated by a greedy, nasty American actress. Carolyn G. Hart's "Out of the Ashes" is a weak and disappointing puzzle tale with very lame detection. Margaret Maron's "With This Ring" is a long-winded and disappointing puzzle tale, further marred by implausible dialogue. Two D's: D. R. Meredith's "One Strike Too Many," centered around an elderly woman solving who killed a boy in a bowling alley, is a very lame, long-winded comic puzzle tale with a great many plot holes. Audrey Peterson's "The Bayville Killing" involves a woman learning two bits of truth, but sentimentality, far-fetched coincidences, implausible reactions, and trite writing spoil this happy-ending story.
Trustpilot
Copyright © 2022 Thriftbooks.com Terms of Use | Privacy Policy | Do Not Sell or Share My Personal Information | Accessibility Statement
ThriftBooks® and the ThriftBooks® logo are registered trademarks of Thrift Books Global, LLC