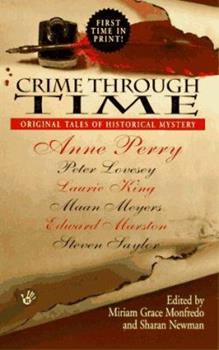 Crime through Time: New and Original Tales of Historical Mystery

(Part of the Julian Kestrel Mysteries (#4.5) Series and Crime Through Time (#1) Series)

Great anthology, although not the strongest of the three...

Published by Thriftbooks.com User , 20 years ago
I picked this book up at a library sale, and have been browsing through the stories one at a time. The origins of the historical mystery in Ellis Peters' Brother Cadfael series is explained, and Cadfael is what turned me onto this genre in the first place. Some of the stronger stories are the story by Steven Saylor(featuring Cicero and an elegant explanation of the Archimedes Principle) and a story featuring Sir Francis Drake and several sailors on the High Seas. A story about a Regency dandy turned detective reminded me of other Regency-based mysteries authored by Rosemary Stevens and Alice Chetwynd Ley (however, I found the "fancy" names given to servants slightly unconvincing); the motive was compelling and the plot well-researched. "Death of a Place-Seeker" which I read three times, seeking to spot all the clues I had missed the first time. [That, in my view, is the true test of a strong story]. I made a mental note of certain authors I intend to try later, having already discovered Steven Saylor and Peter Tremayne from other anthologies. While this anthology has been interesting and entertaining, there were some weaker stories, notably the contribution by Anne Perry, where the story seemed oddly incomplete (what happened to the villain? What did the hint about the villain profiting from the letters mean exactly?). On the other hand, the story about Mrs Hudson as a sleuth-cum-social worker was delightful - and it was rather fun to see Sherlock Holmes get his comeuppance. The story about the Salem witchcraft trials was interesting to me, given my study of the patterns of accusation at some point in my college career.The reason I assign this collection only four stars (about 4.4) is because some of the stories seem incomplete or hastily written. Some of the historical settings seemed unconvincing, while others were simply brilliant. Compared to the second volume CRIME THROUGH TIME II (which I read first), this collection comes off badly. If possible, I would recommend reading the volumes in order. On the whole, this is a good introduction to many interesting authors.

Should have bought it sooner !

Published by Thriftbooks.com User , 21 years ago
Worth it for the Steven Saylor Roma Sub Rosa story alone..

Published by Thriftbooks.com User , 24 years ago
Luckily, you don't have to have a history degree to enjoy this book. The joy of an anthology is finding new authors. In this book, there is a broad span of well-known writers, and some that are not so well-known. It will be fun to find other works by some of these writers. It's worth the money
Copyright © 2022 Thriftbooks.com Terms of Use | Privacy Policy | Do Not Sell My Personal Information | Accessibility Statement
ThriftBooks® and the ThriftBooks® logo are registered trademarks of Thrift Books Global, LLC