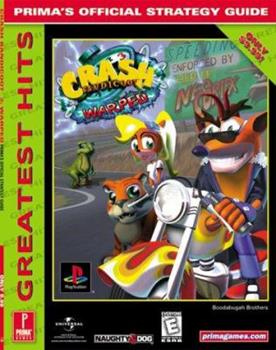 Crash and Coco conquer Cortex! Learn how to play as Crash or his sister Coco withCrash Bandicoot 3: WarpedPrima's Official Strategy Guide.Every new secret, power-up, path, and character is revealed! Race through the game with all of Crash's classic moves along with a slew of new ones. Defeat every boss every time with the detailed how-to! And for those of you who really need help there's a step-by-step walkthrough along with beautifully-colored pages...

Published by Thriftbooks.com User , 14 years ago
My sister was the one who got the game in 1998, but then she beat it 100% and gave it to me (But took her memory card.). I completely love this game, and had problems on some of the Bonus Rounds and finding Colored Gems. But, this guide contains everything you need to know. Soon enough, with the help of this guide, I got 105%! That's right, after you get everything you can there's extra levels that boost your percentage upwards. But, this review's not about the game, so let's talk about the guide. The Good: - Every Move for Crash and Coco is Shown. - Awesome tips for every boss, like the madman NGin. - Walkthroughs of every level, getting most out of your way. - Every character and secret shown. - All hidden paths exposed. - Funny jokes to laugh out on as you play the game. The Bad: - Sometimes puts jokes where there could be hints. - Could have maps in it. With this guide, you'll become a master of time!

WANT YOUR MONEY'S WORTH OUT OF YOUR GAME? GET THIS GUIDE!

Published by Thriftbooks.com User , 21 years ago
Are you having trouble beating this game 100% complete? Well, if your are, you need this guide. Prima's Offical Strategy Guide will show you clear, crisp, and colorful screen shots of all the things you need to do to beat the game. In the end, this guide can make you become a true champion of this fun and exciting video game.

the book was great!it really helped me!

Published by Thriftbooks.com User , 22 years ago
this book was great !it helped me out a lot,it gave me all the information i needed to know! If you're looking for a C3W guide this is it! it's great a 100%

Published by Thriftbooks.com User , 23 years ago
I would think Crash 3 is a great game. I own it and i'm not just saying all this good stuff about it because I own it, I'm saying this because I think everyone who has a playstation game console should buy this game. You can do way more than what you could do in the first 2 crashes, and you do the same as the first two crashes. My friend says that people took a poll over Mario, Crash and Sonic. Mario won, but I don't care I will still always like Crash. I think people who have N64 shouldn't stay on the dark side and come over to the good side and buy Crash. Try it. You'll love the game!
Copyright © 2022 Thriftbooks.com Terms of Use | Privacy Policy | Do Not Sell My Personal Information | Accessibility Statement
ThriftBooks® and the ThriftBooks® logo are registered trademarks of Thrift Books Global, LLC