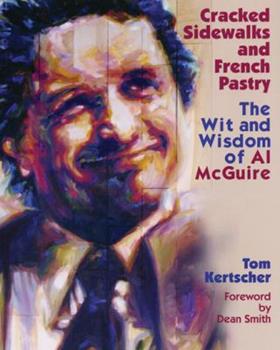 Creaked Sidewalks and French Pastry: The Wa and Wisdom Et

Al McGuire was the Mark Twain of college basketball. Never was there a figure in the game so quoted and so quotable, on sports and on the human condition. This book collects more than a hundred of McGuire's most colorful quotations, plus photographs from his life and career, in a tribute that is funny, poignant, and brimming with his streetwise sagacity. McGuire, a brash and fiery New Yorker who grew up working in his parents' saloon, played a rough...

Published by Thriftbooks.com User , 19 years ago
Al McGuire has been truly captured through this book. The photos and quotes truly capture the man, the charachter, and the coach that was AL. Anyone who grew up around the legend, understood what he meant to the game, but I don't believe anyone has a true grasp until they have turned the pages of this book.

Published by Thriftbooks.com User , 20 years ago
I don't know basketball, and I'm sure that my elevator doesn't go to the top, but I know a wonderful remembrance when I see one. Kertscher illustrates the humanity of McGuire - humorous and touching. The phrases from the glossary have become a shared language between myself and my son.

Published by Thriftbooks.com User , 20 years ago
Growing up in Harvard, IL, I tended to gravitate toward Wisconsin sports. However, I still did not recognize the name Al McGuire. Despite that, I found the book to be wonderful! It made me feel as if I did knew him. Tom Kertscher did a wonderful job of presenting the many quotes and photos, memorializing a man who obviously contributed so much to sports!

This is the real Al McGuire

Published by Thriftbooks.com User , 20 years ago
Most people may know Al McGuire as one of television's most colorful broadcasters, but the real Al McGuire can be found in his insights into coaching, recruiting and life. Even after his death, McGuire remains a towering figure in sports and one of the most intriguing coaches in college basketball history. This book delves deeply into McGuire in the most telling way possible - his own words.
Trustpilot
Copyright © 2022 Thriftbooks.com Terms of Use | Privacy Policy | Do Not Sell My Personal Information | Cookie Preferences | Accessibility Statement
ThriftBooks® and the ThriftBooks® logo are registered trademarks of Thrift Books Global, LLC