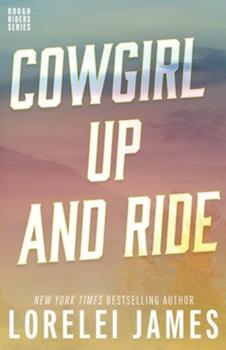 Cowgirl Up and Ride

(Book #3 in the Rough Riders Series)

Goody-two boots AJ Foster has waited her entire life for Cord McKay to see her as more than a girl in pigtails. Now that she's old enough, she's pulling out all the sexual stops and riding hell-bent... This description may be from another edition of this product.

Another steamy book by Lorelei

Published by Thriftbooks.com User , 13 years ago
I have to say that I think this is Ms. James best book in the Rough Riders series thus far. As another reader stated, this heroine was far more believeable and one I could relate to than some of Ms. James others. Although I loved all of her books in this series, this one is my favorite. I could actually imagine the way Cord kissed and made love to A.J. while reading the love scenes. Ms. James was so descriptive and the characters were so wonderfully written. The love that A.J. had for Cord (and Cord was denying himself he had for her) was so touching and beautiful. I found myself brought to tears in several sections of the book. I do have to say that I laughed pretty hard when I read the part about the bachlorette party--I could just envision all those women misbehaving then sneaking out so that noone saw them! This is a book that could be read as a stand alone but you would understand more re other characters if you read the first two books in the Rough Rider series. I'm looking forward to Kade and Skylar's story...I'm hoping it will be as hot as this one was!!

Published by Thriftbooks.com User , 13 years ago
I loved this book. I loved the story, and I LOVED Cord McKay. AmyJO aka AJ was not the usual variety of females in James's book - far more real like someone you could relate to unlike some of the wilder babes in prior novels. But back to Cord. Wow. You could feel the heat of this guy through the electrons of the kindle. I've had it a week on my kindle and am reading it for the 3rd time. Its by a long shot - the best of her work so far.

Save a Horse Ride a Cowboy

Published by Thriftbooks.com User , 13 years ago
AJ is tired of her "good girl" image so when she comes home to help out her mother she decides to go after what she wants and what she wants is Cord McKay. AJ has been in love with Cord since she was 5 years old and wants him to be "her first lover". When Cord first sees AJ at a local bar he can't believe how hot she looks or how hot she makes him feel. But, that's nothing compared to how he feels when she propositions him to initiate her into "hot sweaty no holds bared sex" At first shocked and later intrigued, Cord agrees until his son comes home from visiting his mom AJ will be his every night no strings no ties. Can AJ wins Cords Heart? The interaction between characters is amazing. Lorelei weaves a spell around the reader and before they know it the characters are no longer characters but "very real" people with "real lives, desires, hopes, and dreams". I can't wait for the next book in this series. I do so love this family and do so want a Mckay man of my very own.

She Wants Her Man

Published by Thriftbooks.com User , 13 years ago
Amy Jo Foster, aka AJ, is known for being a good girl and always doing the right thing. So, when her mother needed her to leave school and come home to take care of her, AJ went without even thinking about it. But going home comes with a problem, not with school or her mother, but with the handsome rancher that lives on the next ranch. AJ has had a crush on him since she was 5 years old. Unfortunately, he still sees her as a little girl. Cord McKay had his own problems. His wife left him with a small son and he's got a big ranch to run. Granted it's a family run ranch and he has plenty of family to help but he's still kept busy. Right now, he's having to adjust to his son visiting his mother for the first time in a couple of years. Cord isn't happy about it but his son seems to be adjusting well. When he bumps into AJ, he gets the shock of his life and only because his son isn't at home can he act on AJ's suggestion and desire. AJ wants Cord to teach her all about making love. She can't think of anyone better and at 22 either she's going to get Cord to love her back or she's going to loose her virginity and gain a lot of knowledge. Cord strikes a deal with AJ fulling expecting her to back down but when she doesn't, things get interesting. Though AJ's love life may be looking up, her home life isn't. Her much older sister has decided to divorce her husband of 12 years and the father of her 3 children. While she figures out what she is going to do, she moves home to the family ranch. AJ's mother finally decides that it's time to sell the ranch and move into an assisted living center. Suddenly, AJ's packing up the only home she has ever known and has no place to call home! Even her plans for after school change when her best friend and fellow classmates decides that she's not returning to open a business with AJ. With all the change and turmoil, AJ is holding on to what she has with Cord for all she's worth but even that will end when his son return home in a few weeks. This is a book in Ms James's stories about the McKay family. They don't need to be read in order though the timeline would make more sense. This story is good all on its own though many characters from the first two books are also in this one. AJ and Cord are well-developed characters. AJ has issues and problems that many people face in real life. She deals with them the best she can but not perfectly as none of us are perfect. Cord has major concerns. He has a young son whom he has primary care for. He doesn't want anything to hurt him. Cord also worries about the age gap between him and AJ. AJ is just starting out in life while he's been living it a while. Because both characters interact with their families on a regular basis, this adds dimention to them. The love scenes, while containing some bondage, are just that love scenes and not just sex. Yes, AJ wants Cord to teach her about sex and even though he doesn't love her, he does care about her. Will he ever love her? Ma

Cowgirl Up and Ride

Published by Thriftbooks.com User , 14 years ago
AJ Foster has been in love since she was five years old. Too bad her dream cowboy has only seen her as his little sister's best friend, and therefore, a little sister for her entire life. What he and everyone else have not realized is that AJ is determined to get what she wants. She just has to wait until the timing is right -- when she is home from college taking care of her mother who has broken her leg. Cord is stunned when he notices little Amy Jo at a bar and before he knows that she is also "AJ," he's asking those around him who the hottie is. He is further surprised when she actually propositions him. She is relentless and he finally gives in to a short-term affair. AJ doesn't want a short affair, but she will take what she can get. The fun and games might just be what they both need. But what will happen when their time is up? Will either have learned anything about the other's heart? Or will they have just had a great affair? Cowgirl Up and Ride made me cry, which isn't a bad thing. It means I was so involved in the story that I was upset with something in this "fiction world." I thoroughly enjoyed this story and I'm now searching for any other stories that Ms. James has written about this extended cowboy family. She also did a wonderful job of weaving the characters' histories through the story. I thoroughly enjoyed Cowgirl Up and Ride and think if you like contemporary western romances, you will, too. Tanya reviewed for Joyfully Reviewed
Trustpilot
Copyright © 2022 Thriftbooks.com Terms of Use | Privacy Policy | Do Not Sell My Personal Information | Accessibility Statement
ThriftBooks® and the ThriftBooks® logo are registered trademarks of Thrift Books Global, LLC