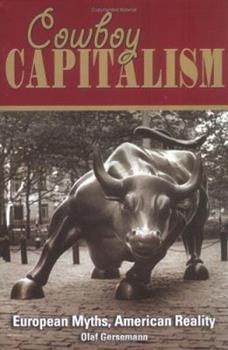 Europeans and many American pundits believe that while the US economy may create more growth, Europeans have it better when it come to job security and other factors. This title states that the market freedoms in America create a more flexible, adaptable and prosperous system than the declining welfare states of old Europe.

Written for Europeans - Should be required reading for Americans

Published by Thriftbooks.com User , 16 years ago
The big three continental European economies - Germany, France and Italy - often look at the US free-market economic system with scorn. They see it as brutal and inhumane and refer to it derisively as "Cowboy Capitalism." Olaf Gerssemann is a German reporter who decided to look into the facts and truly compare the old-line economies of Europe to the United States' economy. What he finds out is just as instructive for Americans as it is for any European. We as Americans hear a lot about the troubles and problems in our country. We hear plenty about layoffs and about corporate greed and corruption. There's probably something healthy about that - it certainly keeps us from getting complacent. However, we hear surprisingly little about how much is going right in our country and in our economy, perhaps because it's so obvious. But the obvious is most easily missed because it goes unnoticed. That is where this book shines. Gersemann took no propoganda for granted. He did what few of us have the time or inclination to do - went and looked up the facts and found out the truth for himself. What he found is that on almost every economic front on which the Europeans (and many Americans) tend to slam this country and its economy, the United States far execeeded its European counterparts in terms of providing for its citizens. As he shows repeatedly, this doesn't just mean the wealthiest citizens either. Gersemann covers employment, quality of employment, safety of employment, ability to find a new job when unemployed, wealth creation, education, health care and more. The results are really important for Americans to know. If more people would read this book, we couldn't be so easily deceived by politicians playing on our fears to push their own agendas. Highly recommended.

Published by Thriftbooks.com User , 16 years ago
I enjoyed this book very much. The author is a journalist as well as a trained economist. The translation from the German is seamless. The approaches to issues are intriguing. The result is a book that is very easy to read and very thought provoking. The implied endorsement by the Cato Institute (the book's publisher) may raise concerns in the minds of some potential readers, but I urge them to let the author present his case without prejudice.

Published by Thriftbooks.com User , 17 years ago
The is an excellent, easy to read book that should be required reading for all high school students. I'm really surprised that this book doesn't seem to be getting more notice in the media. I'm a political junkie, subscribe to 8 political journals, and in the process read a lot of economics. My political views were more socialist when I graduated from college, but got more moderate as I kept doing my homework. When I got done reading this book, it gave me a full belief in the superiority of the capitalistic system, and I voted Republican for the first time in my life. In the book, the author goes through all of the most pertienent economic issues, comparing and contrasting the American and European Systems, and does an incredible job showing the superiority of the American one.

Published by Thriftbooks.com User , 17 years ago
This book shatters any doubt that a free-market system is far superior to government regulations when it comes to maintaining a healthy economy. Capitalists will admire the level of precision with which Gersemann destroys the arguments of those opposed to the American system of capitalism. Detractors who favor the European system (at least those with the intellectual ability to do so) will concede to the error of this thinking. The book is comprised of short narratives followed up by indepth explanations with which the author incessantly debunks myth after myth of the European view of American capitalism ranging from second jobs to taxation. Gersemann's writing will appeal to both the economic layman and the economic scholar. The layman will be endowed with a newfound knowledge of economics while the economist will be delighted with the statistical analysis that will challenge the wits of the most overeducated of peers. As great as all this is, I must mention the absolute icing on the cake of this fine book. Cowboy Capitalism will surely prove a means of holding accountable those politicians who, destructively as one must conclude after reading this book, seek to transform our system of free market into a mirror of European government intervention.

Published by Thriftbooks.com User , 17 years ago
German reporter Olaf Gersemann examines common misperceptions of the American economy in Cowboy Capitalism, providing a survey of the continental econ-omies of Europe versus the United States and examining common myths and realities on both sides of the world. His survey reveals a variety of myths many Europeans believe about Americans and their economy, discussing the realities underlying the rumors. An excellent survey most valuable for its expose of European common sentiments about the U.S.
Trustpilot
Copyright © 2022 Thriftbooks.com Terms of Use | Privacy Policy | Do Not Sell My Personal Information | Accessibility Statement
ThriftBooks® and the ThriftBooks® logo are registered trademarks of Thrift Books Global, LLC