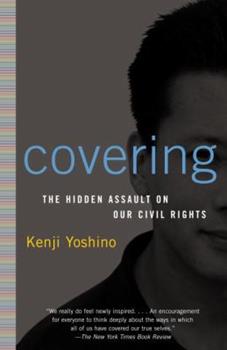 Covering: The Hidden Assault on Our Civil Rights

A lyrical memoir that identifies the pressure to conform as a hidden threat to our civil rights, drawing on the author's life as a gay Asian American man and his career as an acclaimed legal scholar. " Kenji] Yoshino offers his personal search for authenticity as an encouragement for everyone to think deeply about the ways in which all of us have covered our true selves. . . . We really do feel newly inspired."-- The New York Times Book Review Everyone...

This Poet Has Done It Well

Published by Thriftbooks.com User , 14 years ago
The Publisher's Weekly review says it all, but I cannot let the opportunity pass to add my voice to those honoring this book. Yes, it's a simple concept, elaborated over 200 pages, but there is nothing monotonous about it. The academic monotony characteristic of similar monographs is thwarted through the simplest of means: the scholar-author is also a poet. He writes on the minutiae of civil rights law with the compression and unexpected image that make strong poetry memorable. I heard the author speak on the concept of Covering on the Maine Public Radio broadcast of the Chataqua Program. The discussion was interesting enough, but when he read the Epilogue, I immediately thought, "I have to have that in my Commonplace Book." As a politically active gay man and 15-year conductor of a gay men's chorus, I've often meditated on the meaning of cultural appropriation, assimilation, and accommodation and the resulting effect on actualization and abnegation of the individual. So, Kenji Yoshino's orderly discussion of coversion, passing, and covering is immediately attractive to me. But it is not my habit to read 'brainiac' books. I'm put off by the customary tone, talking down to me, especially when the subject of the discussion is, by inference, me and the people I know and love. This one is the exception. I feel like Yoshino and I have just spent a long evening, with a wide variety of friends, talking about something of immediate concern to all of us. And then there's that Epilogue. Talk is one thing, but how we live it out is usually quite another. And it's never simple. That's why it's best left to the hands of a poet, and this poet has done it well.

If you care about the state of our culture, read this book

Published by Thriftbooks.com User , 16 years ago
In Covering, Kenji Yoshino presents a new paradigm for civil rights. By weaving his own personal story of life as a gay, Japanese American man with the legal history of the civil rights struggle of gays and lesbians, Professor Yoshino creates a new, compelling genre of literature. In a bold move that bucked the traditional legal "neutral voice" treatise, Professor Yoshino makes himself and the law available to everyone, including legal scholars. Without a hint of jargon, this book shows how the status and treatment of gays and lesbians has moved from conversion to passing to now covering. His own identity development has passed through similar phases. Covering is a mechanism through which an individual with some "disfavored" or non-dominant idenity traits downplays those traits in order to retain employment, avoid abuse, and generally navigate through the world. When we all recognize the way that covering affects us, whether it is the Black woman who is refused the right to wear cornrows (a real case involving American Airlines), or Professor Yoshino being told by colleague to be a gay professional, not a professional gay, we can move towards a new vision of civil rights. The author advocates not for the dismantling of all covering demands - some are legitimate - but that we force the discussion why a particular demand is being made. Notably, Professor Yoshino's paradigm does not exclude anyone; in fact, its power lies in the fact that even the most privileged person (typically white heterosexual men from wealthy protestant families) can relate to the idea that they shouldn't be forced to downplay elements of his identity. We all have skin in the game when we move away from strict group-based identity politics to recognizing the inherent right we all have to express our idenity in non-conformist ways. One criticism I have, though, is that there is no clear format for these discussions. Although Professor Yoshino states that we need to move away from legal solutions and start with the culutral context, I have a hard time imagining the format for an individual from an oppressed group "discussing" the demand to cover with their oppressor. For example, if someone with flashy rims on their car is stopped and fined under the pretext of some traffic safety regulation, if would be difficult to engage the officer in a discussion of why this law is being unfairly targeted to his attempt at expressing his cultural identity. Perhaps the best solution is that we all need to read this book. Everyone. Spread the word. Give it as a holiday gift. Start these discussions in your homes, schools, and communities. Under this paradigm, we could all live freer, more fulfilled lives.

Best Popular Book By a Law Professor Since "Democracy and Distrust"

Published by Thriftbooks.com User , 16 years ago
It's unfortunate that I only get to say that Professor Yoshino's book is the "best book I've read in a year." That, if anything underestimates how pathbreaking this memoir/proposal is, but unfortunately for the good professor I read Democracy and Distrust last year, and it's tough to top that. In any event, Professor Yoshino's book is powerfully written and intellectual engaging. Perhaps its greatest contribution is its noble endeavor to show how Covering affects ALL of us, not just the marginalized or disenfranchised. Everybody covers, and everybody is harmed by it. Far from diluting his claim, this frank admission offers a way out from traditional civil rights discourse, which is increasingly viewed as provincial, dogmatic, and overly combative. Even people who are sympathetic to traditional (and more radical) civil rights efforts recognize this problem--the "race to the bottom" by which anybody who wants to comment on marginalization has to show how S/he personally has been suppressed by the system. But oppression is cross-cutting: the population of black third-world atheist lesbian disabled midgets is rather small, but the number of people who are forced in some ways to deny who they are is much larger. Yoshino, as one unsympathetic commentator pointed out, is in many ways a child of privilege--getting to attend elite private schools and teaching at a top university. But on the other hand, he clearly has faced his share of marginalization--Asian-American homosexuals are not exactly at the pinnacle of social acceptance. By offering a way to incorporate everybody into the fight for the authentic self, Yoshino can help bring back into the fold those oft-maligned "children of privilege" who are sympathetic to the goal of social equality, but have been left unsure of their status in the fight for that goal. I salute his efforts, and admire his erudite contribution to this critical conversation.

A Most Eloquent and Personal Plea for Upholding Individual Civil Liberties

Published by Thriftbooks.com User , 17 years ago
In lucid terms that escape the legalese that burdens related books, Yale Law School professor Kenji Yoshino discusses a topic that I never really knew had a formal definition. He describes "covering" as the purposeful act of toning down a "disfavored identity" to fit into the mainstream. Since notions of disfavored identities can get subjective, anyone can cover, whether people are members of ethnic minority groups hiding specific cultural behaviors or even white males hiding less discernible problems such as depression, alcoholism or backgrounds that embarrass them. Consequently, given the pervasiveness of such behavior, covering would seem comparatively innocuous, but Yoshino provides ample evidence that covering is a hidden assault on our civil rights. Moreover, it is becoming more of a civil rights issue as the nation's courts struggle with an increasingly multi-ethnic America. His penetrating book is a hybrid between a revelatory memoir and a level-headed treatise on the unacceptability of the current legal doctrine around our civil rights. Toward the latter point, Yoshino discusses covering within the broader context of often egregious civil rights injustices. As he explains it, the courts are mired in group-based identity politics and driven by calls for equality. For example, to sue successfully under the Equal Protection Clause of the Constitution's Fourteenth Amendment, a group claiming discrimination has one of two options. First, the group could argue that it has been denied a fundamental right, like the right to vote. Alternatively, it can contend that the law in question employs a suspect classification, i.e., that the law unjustly singles out a particular group. To argue successfully that it has been penalized by a suspect classification, a group must show that its members have historically been victimized and deserve greater protection from the courts. Given these options, Yoshino describes the increasing wariness about identity politics in a country continually spawning new identities. The current legal trend shows the courts to be veering increasingly toward protecting only the immutable aspects of identity. The legal aspects are surprisingly fascinating in Yoshino's hands, but the more personal parts of his book are the most illuminating, in particular, Yoshino's journey out of the closet. Using his own history as a touch point, he explains the three distinct phases of gay history - conversion, passing, and covering - each defined by various pressures that enforce conformity. During the conversion phase (recreated in films like Todd Haynes's "Far From Heaven" and James Ivory's "Maurice"), gays were pressured to become heterosexual through electro-shock treatments or aversion therapy. During the passing stage, gays were relegated to the closet since mental health professionals were not providing a cure for mainstream acceptance, and having a hidden identity was the only viable way to be tolerated in society. Yoshino contends

Published by Thriftbooks.com User , 17 years ago
In this extraordinary and beautiful book, Kenji Yoshino contends that covering (the term is borrowed from Erving Goffman) is the civil rights issue of our age. Drawing on actual cases, he persuasively illustrates that the courts fail to protect men and women who refuse to "cover," mute, or conceal those aspects of their identities that are socially stigmatized (i.e. their gayness, their status as mothers, their racial identities). If this were all the book did, it would be significant enough. But Yoshino combines his legal and historical arguments with a memoir in which he "uncovers" his various selves--his lawyer self, his gay self, his Asian American self, and his poetic self. In doing so, he empowers his readers to do the same and to think about the connection between living one's own life honestly and the larger project of human emancipation.
Trustpilot
Copyright © 2022 Thriftbooks.com Terms of Use | Privacy Policy | Do Not Sell My Personal Information | Cookie Preferences | Accessibility Statement
ThriftBooks® and the ThriftBooks® logo are registered trademarks of Thrift Books Global, LLC