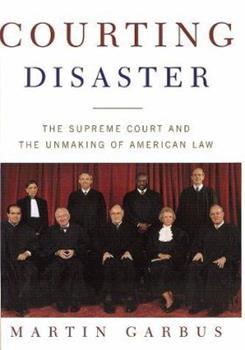 Courting Disaster: The Supreme Court and the Unmaking of American Law

A provocative look at the naked political agenda of today's Supreme Court, from one of America's foremost jurists. In the fall of 2000, when the United States Supreme Court handed down a decision that effectively decided a Presidential election, the Court's role in political life suddenly was thrust onto center stage. But, as legendary attorney and activist Martin Garbus argues, the Court has been a hotbed of politics for years, and it's time we took...

On famous judges mucking up the law

Published by Thriftbooks.com User , 19 years ago
Martin Garbus is the kind of liberal, idealistic protector of constitutional rights who is not afraid to criticize the direction that the U.S. Supreme Court has been taking most recently. One of the things which seems clearer to me than to Garbus is how the Chief Justice can use his power to select himself to write an opinion, whenever the Chief Justice votes with the majority, to fill the law with criticisms of itself that would seem to be empty remarks if filed in a dissent. In the affirmative action cases, Garbus hardly knows what to call this. "Brennan managed not only to pull together a winning coalition but also to have the chief justice on his side." (p. 234). That was in the case of Fullilove V. Klutznick (1980), in which Chief Justice "Warren Burger, writing the majority opinion, said, `We reject the contention that in the remedial context the Congress must act in a wholly color blind manner.'" (p. 234). Actually, this book has `matter' instead of *manner* at the end of that sentence, but if the case had been about a matter in which Congress had acted totally color blind, it would not have been charged with reverse discrimination, a concept which this book calls "part of the Right's sleight of hand to disguise and obscure the varied purposes of racial preference programs." (p. 227).Recently, in the 2003 decision on the undergraduate admission system at the University of Michigan, Chief Justice William Rehnquist was able to write an opinion for six justices, a majority who believe in affirmative action where necessary, but who found that giving minorities an extra 20 points on a scale of 0 to 150 was far too concrete as a form of preference, like having quotas for a certain number of minority students was improper in the case filed by Allen Bakke against the University of California Medical School at Davis, decided in 1978. Compared to some states in which social class might seem determined by birth, what California and Michigan were attempting to do for minorities might seem advanced, in the way in which this book, with the subtitle, "The Supreme Court and the Unmaking of American Law," clearly assumes that constantly harping on the legal principles which tend to benefit the overly ruling majority more than any other claimants can thwart such advancing policies. The book's index is helpful for people who have particular questions about what is at stake in recent cases, though many abuses of constitutional rights that are no longer widely noted in the media are not mentioned. There is no entry for *war*, *drug war*, *confiscations*, and the Private Property Rights Bill listed in the index, "passed by the House of Representatives in March 1995, called for compensation if government actions caused a property's worth to decline by 10 percent or more. The proposal has not as yet been enacted into law, although a bill with those provisions is submitted each year. But what Congress refuses to do through legislation, the Court may d

Informative Though Not Perfect

Published by Thriftbooks.com User , 19 years ago
I've read this, as well as a number of other "political" books recently. I was not hugely impressed by this book, though I believe that is only because I already know and am horrified by what it describes (and therefore did not get much new from it). I wouldn't even have written a review if I had not read a poor review on this site (by a liberal), which talked about how the author's mixing of opinion and fact leaves him open to attack by the right. Hello? This is the problem with liberals; we're too self-analyzing, and too afraid of being attacked. Can you imagine a self-avowed conservative criticising the mindless blather of Ann Coulter's recent book, Slander, for similar reasons? Read this book. Yes, the man mixes opinion and fact, which is to say, he states his opinions and actually backs them up with facts -- an applaudable method that is sadly anathema to many popular political writers.
Trustpilot
Copyright © 2022 Thriftbooks.com Terms of Use | Privacy Policy | Do Not Sell or Share My Personal Information | Accessibility Statement
ThriftBooks® and the ThriftBooks® logo are registered trademarks of Thrift Books Global, LLC