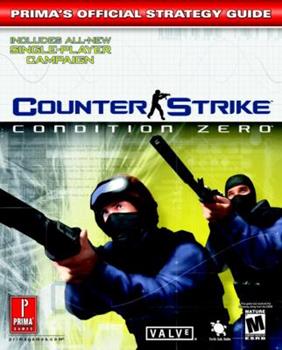 Failure is Not an Option ?Proven single-player strategy for all missions ?Detailed maps and outlines for each mission ?Tips on hostage rescue, bomb defusal, VIP Escort, and more ?Learn how to use new weapons and equipment including the M60, LAW Rocket and Shield Gun ?Killer strategies for playing as a Counter-Terrorist ?All secrets and cheats revealed ?Multiplayer strategies to make you a better online player

Excellent for Noobs that get Owned

Published by Thriftbooks.com User , 18 years ago
This is an excellent book for Newbies in the original Counterstrike game that are constantly getting owned by Online Counterstrike masters such as myself. Granted the game has not been officially released, it is without question, that Newcomers or constantly owned noobs that I own on a regular basis read up before playing the actual game. The book goes in depth on various strategies on an individual level, and team(squal level) tactics. I have played in various Counterstrike tournaments and I am a renound Counterstrike gamer. I must say, this strategy guide could not have been written better. The details and the precise pictorials on each page provides an in depth analysis of begginer and advanced strategies to make descent players out of Noobs(CS terminology for beginner players that I own, or defeat with ease). I have had the privelege to play Condition Zero before it was released, and though it runs on Steam, and does lag, it is definitely going to be considered "Thee Online Game." From my vast experience from playing Counterstrike and winning various tournaments, it would behoove beginners to buy this strategy guide before the game comes out, to gain a slight advantage over their peers, or noob counter-parts. You've probably heard of me, my counterstrike name is RaiderX, and I am from a Hawaiian born clan called S0D, or Squad of Death(pcgods at hotmail dot com). As for advance masters such as myself(probably only about 10 other renound league players and programmers who have meticulously tested the game), there is no need for a strategy guide. But for the majority of newcomers and wannabee masters, this is a must have.

Published by Thriftbooks.com User , 18 years ago
i saw heard about this bokk when my friends told me about it. they said it was really nice, yet i dont realy know myself. they say it adds to the gameplay but eliminates the fun when you know all this stuff. but i recomend this book, if my friend likes it a lot of other people would too.
Copyright © 2020 Thriftbooks.com Terms of Use | Privacy Policy | Do Not Sell My Personal Information | Accessibility Statement
ThriftBooks® and the ThriftBooks® logo are registered trademarks of Thrift Books Global, LLC