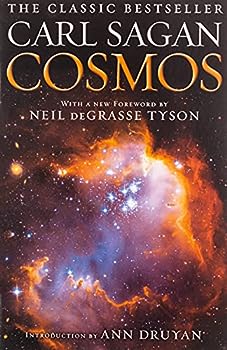 This description may be from another edition of this product. RETURNING TO TELEVISION AS AN ALL-NEW MINISERIES ON FOX Cosmos is one of the bestselling science books of all time. In clear-eyed prose, Sagan reveals a jewel-like blue world inhabited by a life form...

Published by Rose Bryce , 2 years ago
What a well written overview! Makes me want to read the book all over! And it's a book worthy of another read! Such a fine mind and kind heart! You don't always find the two together. What a treasure when you do! Enjoy your journey with this good man.

Published by Gabriel L Delatorre , 2 years ago
This is a great read for novices on science and humanities history. Carl Sagan poetry on science keeps you glued to this book.

Published by Thriftbooks.com User , 18 years ago
As one of the great astronomer-writers of the Twentieth Century, Carl Sagan was extraordinarily communicative with the non-scientific public, able and willing to take the time and trouble to break down the mysteries of the universe into comprehensible fragments. The purpose of this book, which can be considered a companion to the acclaimed television series, is to explain what we know about the universe from a cosmological perspective and why we need to know more about it.Physicists often talk of the unity of the branches of physics: the interrelation and application of mechanics, thermodynamics, electricity and magnetism, and optics to the motion of everything from galaxies to subatomic particles. Similarly, Sagan's major theme is the unity of cosmology with the natural and physical sciences that define what we know about the Earth. Does the stifling, carbon dioxide-choked atmosphere of Venus imply anything about the greenhouse effect on Earth? Was a nearby cosmic explosion called a supernova indirectly responsible for the disappearance of the dinosaurs? What would be the biological consequences for the survivors of a global nuclear war? The answers to these questions are vital to the continuation of life as we know it. Sagan also identifies cosmology with its own history. He lavishes reverent detail on the ancient Greek and Alexandrian study of the stars and planetary motions, the pioneering work by the Renaissance scientists Brahe, Kepler, Copernicus, Huygens, and others, and the men who revolutionized science with the formulation of laws of motion, Newton and Einstein.The scope of "Cosmos" is tremendous, from the farthest expanses of the universe containing a hundred billion galaxies in addition to our own Milky Way, at the end of a spiraling arm of which our solar system is located; down to the lone electron circling the nucleus of a hydrogen atom, the most plentiful single entity in the cosmos and the source of everything we know, love, and are. In between there is discussion of the unmanned spacecraft expeditions to investigate "our" planets: Mars with its boulder-strewn, desert-like terrain; the gaseous giant Jupiter; Io, a Jovian moon of incredible redness, spotted with volcanic orifices and resembling an unappealing sauce-covered meatball; Saturn with its ice rings. Would these worlds contain life? Using what we know about the evolution of life on Earth, Sagan hypothesizes how different types of lifeforms might develop on worlds with different environments. Even a casual interest in cosmology requires a fascination with astronomical distances and unthinkably long spans of time in which a human lifetime is but a blink of an eye. However, Sagan seems to write also for those who would rather relate cosmic arcana to familiar terms, and in this sense he is a grand entertainer: A thought experiment that provides a simple but fanciful illustration of the concept of black holes uses the tea party scene in "Alice in Wonderland" as

The icon of awareness in the realm of science and astronomy.

Published by Thriftbooks.com User , 20 years ago
I barely remember the program leaflet..."Introducing Doctor Carl Sagan - Professor of Astronomy and Space Sciences, and Director of the Laboratory for Planetary Studies at Cornell University."It seems like just yesterday. I was a teenager in New England, and some guy was invited to give a lecture about astronomy at the high school auditorium. I'd never heard of Carl Sagan before, but when his credentials were publicized, I had the notion that his talk would most likely be very interesting. That is, if he was a capable speaker. You never know - I'd been put to sleep by the best of them.Needless to say, I didn't sleep a wink! I was literally riveted to a fluid voice that sounded (and felt) like the eternal trickle of clear water from a bottomless well. His lecture was a celebration of passion and prose. His accounts and speculations of the Planetary Sciences and Exobiology seemed to drain into my head through an ectoplasmic funnel. There were brief moments when my awareness would be perched on just his phrases and expressions, as though he were coining new terminology - "Billions and billions". And afterward he mingled, and I shook his hand.His enthusiasm for science was infectious, like a virus. If you weren't careful, he was going to get you interested. His demeanor and presence were a magnetic force to be reckoned with, and you were darned glad it was. Then the TV series Cosmos hit the screen we all nodded, and said that we just knew he was going to be famous someday. Before he died in 1997, over half a billion people saw Cosmos on TV, and it was the best-selling science book ever published in the English language.Some of the science in Cosmos is now out of date. But that doesn't change the fact that this book and its author will remain forever the symbols of awareness in the realm of science and astronomy. Plus, its philosophies and ideals are as current as today, and for all time.Cosmos was really the beginning of enlightened public interest in the Universe. The juicy morsel that got us to salivate over what has become the ultimate banquet. When the science of Sagan was new, and its theories current, we all dreamt in hoards of being closer to it all; of knowing what he knows; of learning beyond the boundaries that he so ardently confronted. And now that he's gone, there is this legacy - the original manuscript of collective understanding; the quintessential tablet of science for the past, present, and future.Cosmos was the first book to be placed on the Belmont Society's "Required Reading List for the amateur astronomer". It is mostly available in paperback, but a few hardcover editions are still around. Whichever you find, read it with a slight note of reverence. It would be well deserved.

Surely one of the greatest of all books.

Published by Thriftbooks.com User , 20 years ago
I first saw the series COSMOS on TV in about 1980 when I was about 12, and have been searching for similar material ever since. Carl Sagan is able to capture the mystery and the beauty of astronomy, science, art and religion in a way that most poeple can follow, and in a way that is interesting and invigorating. He is a very clear thinker and presenter. And this book, based on that very popular TV series of the same name, I found in an old book store, which I immediately grabbed. Here was something of my childhood, and something very special. The book did not disappoint. It is filled with stunning images, photographs, illustrations, diagrams and so on. And the text is fun, enlightening, clear, visionary, and precise. Not surprising, since it is written by an atronomer at heart. It is also advisable to search around and buy the illustrated edition-the illustrations add much to the text. Carl places the earth on the shores of the cosmic ocean-the title of the first chapter. He traces religious, artistic and scientific investigations into the 'cosmos' throughout the millenia, and the amount of useful historical information he brings up is quite extraordinary. He draws together the thoughts of ancient cultures like the Greeks, Babylonians, Stone Age man, Renaissance thinkers, poets, artists, and famous scientists, and ties these in with many modern discoveries concerning the nature of the universe. One can see his strong leanings on the likelihood of extraterrestial life and the SETI project between the lines, as well as his views on religion and its place in the human psyche. One particularly interesting peice describes the downfall of the old greek science and the destruction of the library at Alexandria, and how these tie in with his views on history, science and religion in general. Carl Sagan is a very clear and thoughtful writer. It is obvious that his knowledge of human nature and science is vast and humane. He worries much about the mususe of science, and the future of man. This book is a must for lovers of general science, human nature and destiny. As such it is a timeless classic. I'll close with the books closing words: "For we are the local embodiment of a Cosmos grown to self awareness. We have begun to contemplate our origins:starstuff pondering the stars; organised assemblages of ten billion billion billion atoms considering the evolution of atoms; tracing their long journey by which, here at least, consciousness arose. Our loyalties are to the species and the planet. We speak for earth. Our obligation to survive is owed not just to ourselves but also to that Cosmos, ancient and vast, from which we sprung."

Simply the best single volume about how the Earth was born!

Published by Thriftbooks.com User , 21 years ago
"Cosmos" is Carl Sagan's masterpiece! He provides us with a very lucid, understandable history of the Universe and how galaxies, solar systems, planets, and our biosphere came into existence.This book reaches way out into the farthest reaches of the Universe, as well as deep within each of us explaining the DNA that makes us who we are. Carl Sagan literally touches on every known field of science as he explains how a brilliant flash of cosmic energy that was transformed into matter eventually provided the stuff needed to make you and me.I cannot recommend this book highly enough. Not only does it inform, but it truly captivates the imagination and provides the basic groundwork for future ponderings.

Published by Thriftbooks.com User , 22 years ago
Carl Sagan's Cosmos, tells the strory of 15 billion years of cosmic history like no one else can.The book shows how broad and deep Carl's interests extend and draws the reader into a world of fascination. Although the book is primarily about how science has developed in our society the book touches on subjects such as history, philosophy, religion, cultures and so fourth. The book is written in simple terms and is understandable to those without a background in science.Carl has an amazing ability to write with such enthusiasim and sincerity. Although the book was written at the height of the cold war it reflects an overall optimisim and hope for our species and planet. Carl Sagan is a remarkable human being and humanitarian as is reflected in all of his books. Cosmos is in some way his manifesto and I believe his best book. Carl's death was a loss not just to science but also to our species.Carl Sagan is my favourite author and Cosmos my favourite book.I recommend Cosmos to all of those who can read! *****!!!

Cosmos Mentions in Our Blog 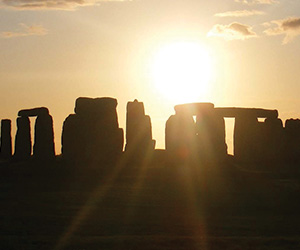 June 21 is the summer solstice, so grab your sunglasses and enjoy today!