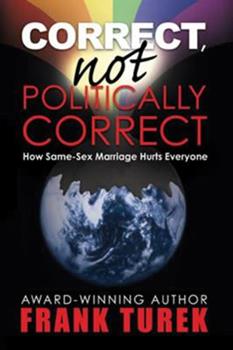 Correct, Not Politically Correct: How Same-Sex Marriage Hurts Everyone

How Same-Sex Marriage Hurts Everyone. Why not legalize same-sex marriage? Who could it possibly hurt? Using sound reasoning and evidence - not religion - award-winning author, Frank Turek, shows that everyone will be hurt including children, the nation, and even homosexuals themselves. Turek provides concise answers to objections about equal rights, discrimination, and being born a certain way, and he exposes the real reason gay activists are trying...

Sad that this book is "politically incorrect"..

Published by Thriftbooks.com User , 12 years ago
Dr. Turek does an excellent job of explaining his view in this book. Loaded with facts and other great information, "Correct, not Politically Correct..." is a must have for everyone who recognized that the gay movement in the world must be stopped for the good of the family, the individual and for the good of gays as well. It is sad that this book is "politically incorrect" as it should be the clarion cry of all of our representatives.

Critical issues are being ignored by the mainstream media

Published by Thriftbooks.com User , 12 years ago
Correct, Not Politically Correct; How Same-Sex Marriage Hurts Everyone This book details the many aspects of same-sex "marriage" never addressed by the mainstream media or by the gay and lesbian community and advocates. We can and should love and respect our gay and lesbian family members and friends, but this does not mean we should promote a change in the definition of marriage! Society obtains no meaningful benefit from promoting same-sex "marriage" and therefore has NO obligation to do so. This book should be mandatory reading for the general public, which seems increasingly (but wrongly) persuaded that respect for gays and lesbians as individuals requires creation of a special "class" for them, along with a "right" for them to marry.

Published by Thriftbooks.com User , 12 years ago
If you need a handy book to show how homosexual marriage hurts culture and society, read this one. This is rather small, but informative book. Author presents a case against same sex marraige based on several aspects, including: inherent destructiveness of homosexual behavior for homosexuals themselves, the negative economical consequences for public in general, destructive consequences for natural marriage, and most obvious - the neglect and harm for children. Whether you are critical of same-sex marraige or not, you could benefit from reading this book. But benefit is only possible if you're honest and objective. I recommend this little book for those who want to further their knowledge about harm imposed by same-sex marriage, particularly as it regards to the social/political aspects and consequences of legalizing same-sex marraige.

Published by Thriftbooks.com User , 12 years ago
Same-sex marriage is a volatile subject in today's culture, yet Dr. Turek does a great job defusing the issue. His treatment of the subject is fair, balanced and most of all, eye opening. While many of us think that we should live and let live, allowing two people to fall in love and marry regardless of gender, there is much more at stake. Dr. Turek explains why such a stance is not only (believe it or not) "unloving" but also harmful to both the individuals involved and society as a whole. Dr. Turek has been personally touched by the issue and explains how openness and love, when misguided, can have tragic consequences. He offers an alternative means of loving those struggling with SSM. I would strongly urge anyone who has been touched in any way by the personal or political effects of SSM to read this book. You won't regret it!

Published by Thriftbooks.com User , 13 years ago
It takes a lot of courage to write on this subject. There are a lot of emotions swelling around this issue in the world today, and I have to say that Dr. Turek does a great job of articulating the facts about same-sex marriage. He doesn't come out screaming hell, fire, and brimstone. He breaks it all down into bite-size pieces on why SSM is harmful to society. He also balances his arguments with the reinforcement that while he disagrees with their practice, he cares very much for the people in the homosexual community--a very important thing to distinguish, in my opinion. He says that if you love someone, the loving thing to do is to tell them the truth about reality. In this case, Dr. Turek explains the dangers involved with SSM--medically, politically, and personally. He cites resources such as the American College of Pediatricians, the CDC, and more to defend his case. He also takes a look at documented research from countries like Norway and Sweden where SSM has been legal for a long enough time period to give us a glimpse of what to expect. Two other things I will mention about the book. First is that it has a helpful section titled "Answering Objections" where Dr. Turek responds to things like "Jesus said you ought not to judge", "born homosexual?", "tolerance", and "Isn't opposition to SSM opposition to love?" Second, there is a section at the end called "Executive Summary" where the book is broken down into a few pages for helpful review. The book is only 143 pages in length, so it's great for a quick read, but it's also a well-written concentrated dose of good research and real-life stories delineated for the purpose of what is best for the people of this country.
Copyright © 2022 Thriftbooks.com Terms of Use | Privacy Policy | Do Not Sell My Personal Information | Accessibility Statement
ThriftBooks® and the ThriftBooks® logo are registered trademarks of Thrift Books Global, LLC