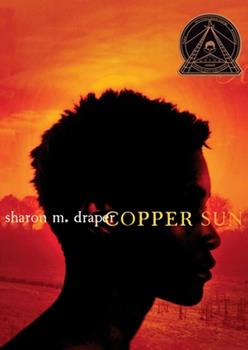 Copper Sun is the epic story of a young girl torn from her African village, sold into slavery, and stripped of everything she has ever known--except hope.

Published by Stacy Singh , 10 months ago
Best book ever

Published by Thriftbooks.com User , 14 years ago
I have been a fan of Sharon M. Draper for some time. She is a master at writing realistic fiction. COPPER SUN is her first historical fiction and it is amazing -- as well as frighteningly authentic. This book follows the trials and tribulations of Amari, a fifteen-year-old African maiden. After witnessing the slaughter of both the old and young in her African village, including her parents and her young brother, she is chained, by feet, hands, and neck, lined up, and herded miles on foot to the ocean by pale skinned visitors with fire sticks. She watches her fellow Africans suffer incomprehensible humiliation and death at the hands of their captors as they are shipped like animal cargo across the ocean. The life that awaits her is nothing like she could have ever imagined. Amari must adapt to life as a purchased slave on a rice plantation, a life that includes atrocities committed upon her by her white owners. She meets Polly, an indentured servant who has dreams of making it to the big house and being a fine lady of standing. Instead, Polly lives in the slave quarters and finds she's given the chore of civilizing Amari, now called Myna, and teaching her enough English to work. After witnessing murder, the two girls find themselves thrown together in a desperate run for freedom. This is not just another book about slavery. This is a book about something real and tangible. Ms. Draper's writing is so vivid that you can smell the rank odors beneath ship. You can feel the pain of being lashed with a whip. Your throat will constrict at the heart-wrenching pain of a mother and child being forced apart. You will also celebrate the strength and spirit of Amari and those she inspires. COPPER SUN won the Coretta Scott King Award. This is a book I will make sure goes on my classroom shelves. I give COPPER SUN a gold star! Reviewed by: Cana Rensberger

I Cried for Her Loss in Innocence

Published by Thriftbooks.com User , 14 years ago
Powerful, life-changing, and a must read, "Copper Sun" gives a vicarious account of what life must have been like during the slave era. For Amari, her life in Africa was peaceful and happy until she was kidnapped to be sold as a slave. Upon arriving in America, she was bought as a "birthday present" for the plantations sixteen year old son--what an OUTRAGE! She begins life on the plantation helping cook, among her "duties" for Clay. "Copper Sun" gives insight to the hardships that all slaves endured and this books accounts are heart-wrenching. This story will keep your adrenaline flowing, at times your eyes crying, and renew your belief in the power of the human spirit--I couldn't put it down--I read it from cover to cover. Sharon Draper has become my "new" favorite author.

Published by Thriftbooks.com User , 14 years ago
THIS IS A MUST READ!!! Mrs. Draper has true writing skills that worked magic throughout this book. This book is classified for young adults but everyone should read it young and old alike. Mrs. Draper takes you from the very beginning with Amari playing with her brother in Africa, to being captured at the hands of her own neighboring tribe. From the horrible boat ride to America, (in vivid detail) to Amari being sold to a plantation owner for his son's sixteenth birthday present. Amari is left in the hands of a white indentured servant girl about her age to be made "civilized." You will have to read it for yourself to see what happens from here, you will not be disappointed! I was full of so many emotions, happy, sad, angry, I found myself ranting aloud a couple of times. This book is not predictable by far; I found it hard to put down. I rarely take books to work with me in fear of reading them and I just could not leave this book at home! This book offered me knowledge and understanding and for that I am grateful. Continued success to you Mrs. Draper.

Published by Thriftbooks.com User , 15 years ago
Copper Sun was an exceptional book. I completely fell in love with it. The characters were well developed, the plot wasn't very predictable, and it gave me a sense of awe and wonder when I finished it. The book is under the genre of historical fiction and is about a 15 year old slave girl who was captured and sold into slavery from her native home in Africa. However, this isn't your typical fly-away-to-freedom slavery book. Amari, the main character, was raped and brutally beaten before she escaped to freedom with her white friend and a young boy. Sharon Draper offers two perspectives-that of Amari and of her white comrad Polly. Ironically instead of escaping to the North, they escape to the South where a non-discriminatory fort exists. There all are free and equal which is extremely uncommon during the year 1738. I won't tell anymore-you have to read it for yourself!

A painfully honest novel about slavery in America

Published by Thriftbooks.com User , 15 years ago
Fifteen-year-old Amari loves life in her home village in Africa. She spends her days strolling along the stream, daydreaming about her handsome future husband, teasing her little brother, and avoiding chores. But everything changes the day the pale-faced visitors arrive. Everyone contributes for the celebration to welcome the strangers. Amari helps her mother arrange the food, her storyteller father shares his tales, her fiancé plays his drum, and everyone dances. But then their world shatters as the strangers begin killing the adults and young children. Amari stands stunned as her parents drop dead from gunfire. Her little brother urges her to run into the jungle for safety; they try, only for Amari to be captured and her brother to be shot dead. The nightmare continues as Amari and the other young people find themselves chained together and forced to walk for days. At the coast, Amari views the ocean for the first time and most of her friends for the last time. Packed tightly into ships, Amari's people endure horrific conditions: hunger, thirst, sickness, lying in their own waste, and rape. More die and are tossed overboard, but Amari survives with encouragement from a woman named Afi, who tells Amari that she has to live; Amari has a purpose in life and she must find hope. But hope is the last thing to be found on a slave ship, and that is what Amari has become --- a slave. Upon arrival in America, Amari is sold to the highest bidder, a rice grower wanting a birthday present for his son. Soon Amari meets Polly, a white girl indentured to the same rice grower. The two girls from different ends of the earth bond together in order to survive, and their friendship just might help them fight their way to freedom. Sharon Draper is the granddaughter of a former slave, so this tale must hold a special place in her heart. She tells the story of Amari with such powerful description that it almost feels as if the reader was right there in the nightmare. It is so hard to comprehend how humans were once bought, sold, owned, and degraded in a country that stands for freedom. This painfully honest novel brings back the past so that people will never forget. --- Reviewed by Chris Shanley Dillman, author

Copper Sun Mentions in Our Blog