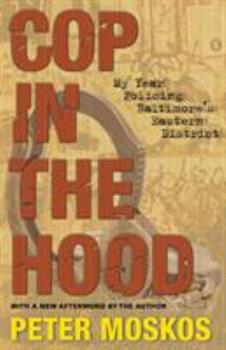 Cop in the Hood: My Year Policing Baltimore's Eastern District

When Harvard-trained sociologist Peter Moskos left the classroom to become a cop in Baltimore's Eastern District, he was thrust deep into police culture and the ways of the street--the nerve-rattling patrols, the thriving drug corners, and a world of poverty and violence that outsiders never see. In Cop in the Hood, Moskos reveals the truths he learned on the midnight shift. Through Moskos's eyes, we see police academy graduates unprepared for the...

Cop in the Hood is Gold!

Published by Thriftbooks.com User , 14 years ago
This book is amazing. It takes you into the real life of becoming a polie officer through the academy to life on the streets. Peter Moskos does an excellent job in telling the truth of the life of a police officer. For anyone interesting in becoming a police officer or would like to learn what life is like. This book is for you. I highly recomend it. This book was very well written.

A reasonable and sensitive policeman

Published by Thriftbooks.com User , 14 years ago
Peter Moskos presents himself as a reasonable and sensitive policeman who cares as much about the neighborhoods he's worked in as the other police officers he works with. His writing seems at once personal and well-researched. By giving us his first-hand account of how the war on drugs is damaging our inner cities and our police forces he makes a very convincing argument for real change in America's approach to the "drug problem." I found his writing engaging and persuasive and highly recommend this to anyone who still believes drugs are the cause of so many of our societal ills.

Great book from someone who's been there

Published by Thriftbooks.com User , 14 years ago
Even before watching The Wire, I was very interested in what actually goes on in tough inner city neighborhoods - particularly between cops, criminals, and regular citizens. Peter Moskos was on the street there as a cop, and the combination of hard headed practicality, a love of cities, and a broad background in sociology make for an engaging and low-bs read. Anyone who's interested in the drug war, police culture, or the future of the inner city should definitely read it (and it's a quick read).

Cop in the Hood is excellent

Published by Thriftbooks.com User , 14 years ago
Anyone who loved The Tipping Point: How Little Things Can Make a Big Difference and Freakonomics [Revised and Expanded]: A Rogue Economist Explores the Hidden Side of Everything will love this intrinsic look into Baltimore policing as a microcosm for the war on drugs. Moskos shows the inner working of a system so many of us have preconceived notions about. Is it racist? Turns out it isn't. Is it working? No. Is it the cop's fault? Not the ones that are on the street. Moskos mixes lyrics by rapper Ice T, quotes by Al Capone and police statistics immaculately. The writing about middle of the night encounters with dealers, junkies and gang members is amazingly detailed, and constantly put me in his position as a rookie cop on the dangerous East Baltimore streets. What would I do if I were in his position? I would be afraid. Very afraid. The day to day life (or night to night life in Moskos' case) is filled with such encounters many of them having very humane and sometimes humorous resolutions. In one case Moskos is dealing with a domestic assault where none of the other cops wanted to get into the house because it smelled so bad. Moskos confronted the woman: "Why is it so stinky?" I asked the woman. "He don't bathe. Not in a year." "Why not?" "He lazy." "That's pretty lazy," I said, "because once you get in the tub, bathing kind of takes care of itself." (In this case Moskos didn't get him to bathe) The book is filled with simple and realistic "tipping point" ideas on how to improve the current system from within while using Prohibition and the successful Dutch non-war on drugs as examples of a greater historical context without ever being preachy. Cop in the Hood is a must read, not just for non-fiction lovers and avid viewers of HBO's The Wire - The Complete First Season, but, truly, for everyone who ever wondered about this thing called the war on drugs.

Published by Thriftbooks.com User , 14 years ago
I don't know how I can improve on the excellent and well deserved editorial reviews. They are true. If you liked HBO's The Wire, then this is a must read. This is a rare look at police work from a thoughtful and intelligent participant/observer. Top down analysis gets nowhere in this subject. We will forgive Peter for being a sociologist, since he came close to going native in Baltimore. It reminds me a little of Jane Jacobs 'Death and Life of Great American Cities' in the sense that an open mind and careful observation can get you to insights that aren't either obvious or trivial. I also fully agree with his thoughts regarding the war on drugs. First, anytime you call something 'War' as a metaphor, you have taken the first step down a dangerous path. Just start with The War on Poverty and keep counting through The War on Terror and it isn't pretty. America does fine with existential wars against nation states, like WWII. Anything that can be done by criminalizing essentially personal behaviors like drug use, has been done to America's inner cities. But enough ranting and once more note that Peter's observations are frequently counter intuitive, and there are a number of little tips that may be of practical use (911? think again). Maybe this generation of academic based thinkers can help us get beyond the rhetoric and come up with workable, strategic, and effective policies that will make our cities better places to live.
Trustpilot
Copyright © 2022 Thriftbooks.com Terms of Use | Privacy Policy | Do Not Sell or Share My Personal Information | Accessibility Statement
ThriftBooks® and the ThriftBooks® logo are registered trademarks of Thrift Books Global, LLC