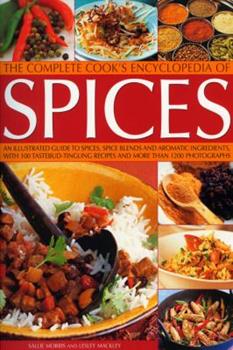 The Complete Cook's Encyclopedia of Spices: An Illustrated Guide to Spices, Spice Blends and Aromatic Ingredients, with 100 Taste-Tingling Recipes and

(Part of the Cook's Encyclopedias Series)

by Sallie Morris and Lesley Mackley

Exotic, aromatic and exciting, spices play a huge part in almost every cuisine. This fabulous encyclopedia is not only a practical cookbook but an invaluable and expert kitchen reference. It includes step-by-step preparation and cooking techniques, and essential information on storage containers and equipment. Over 50 spices are shown in glorious full-colour, showing their various forms ? whole, ground, dried or fresh. Their aroma, flavour, culinary...

Good text and pictures. Other books are better.

Published by Thriftbooks.com User , 16 years ago
`The Cook's Encyclopedia of Spices' by English authors, Sallie Morris and Lesley Mackley appears, on the surface, to be a very attractive and informative book on spices and how to use them. Unfortunately, it stumbles on a couple of important points and it is up against some first class competition. It's primary shortcoming is that it limits itself to only spices and does not deal with what most people on both sides of the Atlantic would call herbs. I consider this a shortcoming because the authors include many recipes for `spice mixes' which are mixes as much of dried herbs as they are of spices. The Cajun spice mix, for example, includes dried thyme. The barbecue spice mixtures include dried marjoram. And, the `Old-fashioned Philadelphia Spice Powder includes both dried basil and dried thyme. The coverage is even more confusing in that the book does cover both bay leaves and fenugreek leaves. By virtually everyone's definition, any leaf used in cooking is an herb, not a spice. A second annoying shortcut is that the articles on spices are arranged in alphabetical order by their scientific name. Sacre Bleu! I am all in favor of stressing the importance of knowing the scientific names of plants giving us culinary products, but arranging things by scientific name which no one except a biologist is likely to know is foolish. The authors repair their error somewhat by giving us a table of contents in common name order, but who wants to take two lookup steps when one should do. A third annoyance is the fact that almost half of the book is dedicated to recipes that use spices. In a very attractively photographed book with decent text on its subject, this is a total waste of space, especially for someone who has even the most modest collection of cookbooks. Virtually every savory recipe uses herbs or spices of some sort. If you include salt as a spice (which the authors do), virtually every recipe on earth, with the possible exception of Tuscan bread, uses a spice or herb. I would want a good spice book to give a good selection of spices mixes, but if I want a recipe, I would simply not bother going to a book on spices before going to a book on French cooking or fish cooking or fast cooking or fastidious (See `Cooks Illustrated' or Alton Brown) cooking. The shame of it is that the authors have gone to great lengths to provide the book with very good illustrations and very decent text on the spices it covers. In fact, I get the sense that the authors have overdone it a bit with the color pics. For the spice mixture recipes, they provide little pictures of each and every ingredient, over and over and over again. It also manages to cover a fair variety of spices, although not as great a variety as its competition. The best competition I have seen recently is Tony Hill's `The Contemporary Encyclopedia of herbs & spices' which covers a lot more different species and does it with an entertainingly personal look at the world's condiments. Another excelle

Published by Thriftbooks.com User , 19 years ago
I thoroughly enjoyed,and still enjoy, this book! I was looking for a book with spice information to have available for my customers - and this book fit the bill. The book has a "clean" look, with clear descriptions of the many spices included in it's pages. I found the information to be thorough, and the pictures are fantastic!This book is loaded with information on individual spices, but it also gives recipes for spice combinations as well as recipes from breads to desserts that include a variety of spices that are both common and a little more exotic."The Cook's Encyclopedia of Spices" had what I was looking for, and then some, without being overwhelming.I feel that any chef, or weekend cooking warrior, would find this book helpful.
Copyright © 2022 Thriftbooks.com Terms of Use | Privacy Policy | Do Not Sell My Personal Information | Accessibility Statement
ThriftBooks® and the ThriftBooks® logo are registered trademarks of Thrift Books Global, LLC