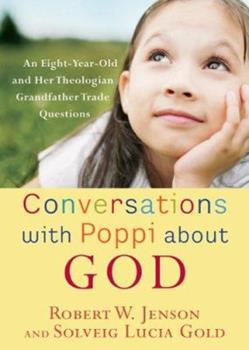 Conversations with Poppi about God: An Eight-Year-Old and Her Theologian Grandfather Trade Questions

Contains unscripted, spontaneous talks about everything from the meaning of the Trinity to what God looks like. This book reminds us that we have a lot to learn from theologians and from children. It is useful to parents, grandparents, pastors, teachers, and Christians looking for a refreshing perspective on the mysteries of Christianity.

But there is something here for all Christians --- or skeptics --- from adolescents to grandparents,

Published by Thriftbooks.com User , 15 years ago
What a good premise for a book: an eight-year-old precocious child carrying on a theological conversation with her 73-year-old grandfather --- not just any grandfather but a noted "Reverend Canon Professor..." who has edited a volume on Christian dogmatics. In an introduction, Solveig Lucia Gold explains her book's origin: "It all began on a dark, chilly night, sitting by the fireplace long after my bedtime at [my grandparents'] home in Princeton, New Jersey. I had a theological question to ask my grandfather (Poppi)... Poppi gave a lengthy reply that led me to ask him more theological questions." The next morning her grandmother suggested that further conversations be taped and transcribed "to turn them into a book." In a second introduction, Dr. Jenson explains that the conversations were "wholly unscripted" and edited ever-so-slightly. Topical subheads have been added (something less than chapter demarcations) to introduce conversational shifts. Occasionally the narration is so conversational that I had to read a sentence twice. But a heavier edit probably would have interfered with the spontaneous and playful tone of the mischievous child, who sometimes teases her grandfather and even brings up Dante and his view of purgatory (which Solveig's father has explained to her). After starting at the obvious place, a discussion of "the beginning" --- the Genesis creation story, the introduction of sin, the fall of Lucifer --- much of the book follows the whim of a child's curiosity. Christmas is approaching, and Santa Claus --- or the bishop St. Nicholas --- wanders in and out of the conversation, as does the mysterious role and work of the Holy Spirit, as does the first line of a Lenten hymn, about Jesus's temptation in the wilderness: "Forty days and forty nights..." And yet young Solveig isn't just running at the mouth. Here's her summary of the metaphysical discussion that starts with the question, "Could God make two and two equal five?": "Two plus two is four because God knows it, and he knows it because it is true... If God knows it is true because it is true, he knows that it is true because it is true. But he also knows that it is true because he knows it." Ultimately Solveig isn't in control of the conversation. Grandfather sometimes cuts in with an authoritative statement, based on the scriptural account or theological tradition. When Solveig proposes that "Jesus has his own thoughts, and God has his own thoughts. They don't think alike --- they do think alike. But Jesus could be watching over one continent, and God could be watching over..." Poppi cuts in with "No, no, no!" Eventually the book is less randomly structured than at the beginning. The conversation turns to the phrases of the Lord's Prayer and then the Nicene Creed, which Grandpa Jenson (a Lutheran) and Solveig (an Episcopalian) repeat as part of every Sunday service. A few conversational points --- about seasons of the church calendar, for example, or the wording o

What A Great Book!

Published by Thriftbooks.com User , 16 years ago
I have read both volumes of Robert Jenson's "Systematic Theology" and many of his articles, and I can safely say that Jenson is quite difficult. In fact, I had to read, re-read, and then read again several chapters of Jenson's "Systematic Theology" in order to get a solid grasp of what he was communicating. However, this work brings Jenson down to the lay level and covers issues that are basic yet imperative that all Christians understand. This book is great, not only because it is Jenson, but also because Solveig (Jenson's granddaughter) asks all the right questions. Moreover, Solveig is a brilliant child in that the questions she asks go right to the heart of the matter. The work is quite basic, but very important in terms of its content. The book covers issues such as Evil, God's Motives, Providence, The Messiah, Communion Practices, the Resurrection, The Lord's Prayer, Lent, the Christian Calendar, Advent, Santa Claus, The Nicene Creed, Prayer, and much, much more. It took all of 30 to 40 minutes to read the whole text. It is engaging, fun, serious, and just plain educational on many levels. This was a brilliant idea. Moreover, we get a glimpse into the mind of one of the greatest theologians of the 20th century and how he would answer questions that at one time or another, we as Christians have asked. I highly recommend this book!

Christian Friendship and care of souls

Published by Thriftbooks.com User , 16 years ago
Robert Jenson is one of the most important Theologians living in the United States. Unfortunately most of his writing is dense and difficult to understand for us mere mortals. Back when I was in Seminary, I hated it when we were assigned anything by him because of this. However, I have started to enjoy reading short articles by him, even if his books usually make me give up in frustation. I learn a lot when I read his work and even find myself agreeing with him more often than not once I digest it. So, when I saw this book advertized, I expected that it would either be very good if there was genuine communication or very bad if he talked over her (and our) head. It is with great joy that I report it is the former. While I bought the book for "Jenson light", I found that while that is certainly there, something arguably more important is there as well. It is a model of Chirstian Friendship between the two authors. The Rev. Dr. Robert Jenson is obviously the senior partner here, but the two authors treat each other with respect, love, and humor as they deal with some very difficult issues. In short, Dr. Jenson treats his granddaughter as a fellow Christian, and not just as a sponge to absorb his considerable knowledge. I pray that more of this goes on in the church and hope that this book helps serve as a model.

Published by Thriftbooks.com User , 16 years ago
One of America's foremost theologians, Robert Jenson is a wonderful writer whose work is always worth reading. This book, consisting of transcribed conversations with his granddaughter, is an absolute delight. It is warm and humorous, but also profound. It is sweet, but never condescending. Solveig holds her own in the conversations with her grandfather, and he both respects and encourages her thinking. Conversations with Poppi about God is careful theology at its most accessible level, with lots of affection and a twinkle in the eye.
Trustpilot
Copyright © 2022 Thriftbooks.com Terms of Use | Privacy Policy | Do Not Sell or Share My Personal Information | Accessibility Statement
ThriftBooks® and the ThriftBooks® logo are registered trademarks of Thrift Books Global, LLC