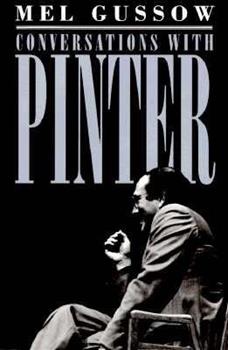 For more than twenty years, Mel Gussow, a drama critic for the New York Times, has been meeting Harold Pinter to talk about work and life, plays and people. At the core of this book is a series of lengthy interviews - some of the most extensive that Pinter has ever given - all published here in full for the first time. Pinter and Gussow first meet in 1971, when Old Times is a new play and Pinter's status as a major writer is still being confirmed...

Published by Thriftbooks.com User , 21 years ago
In a series of interviews between 1971 and 1993 Gussow (longtime _New York Times_ drama critic, who also coaxed a fascinating set of comments from Tom Stoppard) got Pinter to talk about how he works. Pinter refuses to comment on what his work "means," but is eager to clear the air about misperceptions about himself (such as being in a chronic state of outrage). Pinter comes across as generous as well as politically committed, suspicious of audiences, but grateful to (fellow) actors. And he clearly has a sense of humor (too rarely appreciated in his plays).
Copyright © 2020 Thriftbooks.com Terms of Use | Privacy Policy | Do Not Sell My Personal Information | Accessibility Statement
ThriftBooks® and the ThriftBooks® logo are registered trademarks of Thrift Books Global, LLC