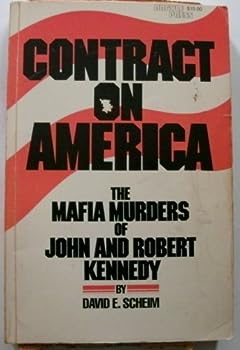 Contract on America: The Mafia murders of John and Robert Kennedy

A reexamination of the Mafia's role in the assassination of John F. Kennedy discusses Jack Ruby's criminal activities, his top-level Mafia ties, and how the Warren Commission blatantly covered up the... This description may be from another edition of this product.

Published by Thriftbooks.com User , 19 years ago
He's passed on now but when he handed me the book almost 20 years ago he said "This is almost dead on." And for reasons I won't elaborate on he knew some of those who knew those who carried this out. That coupled with the thorough research of the author gave me chills then and chills now. Who lost the most from Bay of Pigs? The crime bosses. Havana was well on its way to becoming the drug/sex/gambling playhouse of the New World, and only 90 miles from our shores! What a deal, with [people] like Batista in their pocket, they had a perfect plan. My Dad went to Havana twice pre-Castro to meet with his "friends". Keep in mind that part of the deal was the compliant Cubans at the top of the food chain, most of whom came here after Castro, which is why they get no sympathy from me. No matter how bad Castro has ever been, he's better than Batista who was a criminal and a traitor to his people, but they never mention that. If you're ever in a conversation with a Cuban without a gun, ask him to tell you what life was like for most Cubans before Fidel. It usually stops the conversation.

Published by Thriftbooks.com User , 19 years ago
This book covers one of the essential aspects of the murder of President Kennedy: the Mafia and his executioner Jack Ruby.It is a thorough investigation: David E. Scheim went as far as analyzing all telephone calls by Ruby before the assassination.The author gives us a most credible explanation of how the Mafia could benefit and did after the murder. More, he draws a disturbing portrait of how the Mafia penetrated the highest power ranks in the U.S. and how it could influence the life of every U.S. citizen.He castigates the Warren Report as a shameful misjudgment.This book is a must read. It describes how a secret organization could wield enormous power and influence to its own adavantage a whole democratic nation and its citizens.

Complete Documentation on Part of the Picture

Published by Thriftbooks.com User , 22 years ago
The author is on the Board of Advisors of the Assassination Archives and Research Center in Washington DC. His book contains many references and citations for his sources, and documentation. It is very good as far as it goes, but only gives part of the big picture. Organized crime can kill anybody, but they can't cover it up without Establishment collusion. Mark North's "Act of Treason" documents this collusion, and complements and extends this work. The empire of organized crime struck back at the author. A few years ago the Republican Congress reorganized the National Institutes of Health and used the usual bureaucratic tricks to end his employment. But his book continues to educate people. Chapter 22 discusses Richard Nixon. Around 20 years ago I saw him on TV; when asked about the 19 minute gap on the tape, he smiled and said it was about the "Bay of Pigs" operation. I thought he seemed to be lying, but didn't know why. Years later I read Henry Haldeman's thin book. In it he concluded that the "Bay of Pigs' operation was a code word for the assassination of JFK. You can look it up.

Published by Thriftbooks.com User , 22 years ago
An intelligent and insightful look into the often over-analyzed assassination of JFK. Provides the burden of proof that the Warren Commission said did not exist. An excellent read for every Kennedy fan.

Published by Thriftbooks.com User , 22 years ago
This book is deeply shocking. It is taken from the U.S. Archives, The Warren Commission Reports, Telephone Company records, etc. It has an extensive (HUGE) bibliography of where you may see this evidence for yourself. Read "Contract on America", "Appointment in Dallas" and the thick biography of Carlos Marchello and you WILL understand what happened that dark day in Dallas. Warning: You will be deeply altered by this information, and you will understand most of the many reasons why John and Robert Kennedy, Martin Luther King and Malcom X were asassinated. EVERY American Citizen owes it to his or her self to read "Contract on America", as painful as it might be.
Trustpilot
Copyright © 2022 Thriftbooks.com Terms of Use | Privacy Policy | Do Not Sell or Share My Personal Information | Accessibility Statement
ThriftBooks® and the ThriftBooks® logo are registered trademarks of Thrift Books Global, LLC