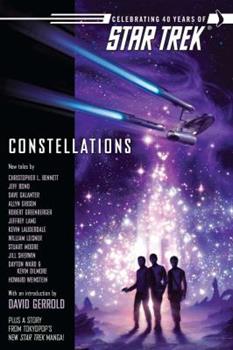 (Part of the Star Trek: The Original Series Series)

Star Trek: Constellations is a mind-blowing collection of specially-commissioned stories designed to go where no anthology has gone before. Featuring the iconic heroes of the Star Trek universe -- the legendary characters who were the inspiration for all those who followed -- this treasure trove of untold tales recreates all the sense of adventure that marked the original Star Trek when it first burst on to our television screens in 1966. Each story...

Any who miss Star Trek will want this book!

Published by Thriftbooks.com User , 14 years ago
Fans of Star Trek can't get enough, and STAR TREK: CONSTELLATIONS is a collection of stories that adds to the adventures of the cast of the Star Trek universe. Here are untold tales from such notable contributors as Stuart Moore, Jeff Bond, and more. There's even a story from Tokyopop's latest Star Trek manga. Unlike other single-book stories this is designed as part of the series' fortieth anniversary celebration and gathers new original tales designed to feel like 'lost' episodes - and in this endeavor it succeeds well: any who miss Star Trek will want this book! Diane C. Donovan California Bookwatch

Some great stories with the original Star Trek heroes

Published by Thriftbooks.com User , 15 years ago
2006 is the 40th anniversary of the entire Star Trek phenomenon. Much like the last couple of years, which have had anniversary anthologies for various Trek franchises, Pocket Books has now published one for the Original Series. Once again, editor Marco Palmieri has chosen from the stable of current Trek writers as well as some up-and-comers to put together a very nifty group of stories that holds your interest throughout. While some are certainly weaker than others, I can honestly say there isn't a bad story in the bunch. All of the stories take place during the original five-year mission, and few of them are "sequels" to episodes, trying to explain a discrepancy, or anything like that. I found that refreshing, actually, with continuity references kept to a minimum. Probably the best story in the bunch is the last one (except for the TokyoPop Manga story that ends the book, but that story is actually a promo for the comic anthology) is "Make-Believe" by Allyn Gibson. It's about what Star Trek is to us regular people, not a story about Kirk & Spock. A young boy, whose father has been killed in Iraq, has lost himself in the fantasy world of Star Trek, even going so far as to throw a fit when his teachers try to take away his action figures. Something is going on inside his mind, something that his harried mother, who doesn't understand neither her son's nor his father's interesting in all this sci-fi stuff, can't quite figure out. When she finally does, though, maybe both of them will begin to heal and be able to live again. This is almost a warning story, in a way, telling us not to lie to our kids when we don't know what's going to happen. It can have great and horrible effects if you're not around afterward to discuss it. Gibson does a great job with this one, and it definitely brought a tear to my eye. One political statement (though understandable, considering it's uttered by the mother) seemed out of place in the rest of story about emotions, but that's the only thing that came close to marring this beautiful story. Another wonderful story is also near the back. "Where Everybody Knows Your Name" by Jeffrey Lang. This story is an outright comedy, and it's a pretty funny one too. The Enterprise is near the end of the five-year mission, and it's starting to get really stuffy, no matter how good the air filtration is. McCoy's beginning to go stir-crazy, wondering what he will do once the mission's over. But first, Kirk convinces him to accompany Scotty to a conference while the Enterprise goes to investigate something, and their trip back to the Enterprise is priceless. They find themselves on Deneb (the home to the Denebian Slime Devil) where a local shady character tries to ingratiate himself with a disgraced Klingon by capturing the legendary "Captain Kirk and Mr. Spock." With alcohol flowing everywhere, you know chaos is going to erupt, especially when the mistaken identities become known. This story was enjoyable fro

To the defense of "Constellations."

Published by Thriftbooks.com User , 15 years ago
I am afraid that I have to come to the defense of "Constellations." It is a very good book with very good stories in it ( my favorites were "Fracture," "As Others See Us," "See No Evil," and "Devices and Desires" - though I felt that "Make-Believe" was rather heavy-handed). There is not a bad story in the bunch (and I am glad that the writers didn't crossover any references, characters, etc., with any of the other STAR TREK series. This is pure TOS). I am eager for other compilations such as this to come out in the future for the readers of the STAR TREK universe.
Copyright © 2020 Thriftbooks.com Terms of Use | Privacy Policy | Do Not Sell My Personal Information | Accessibility Statement
ThriftBooks® and the ThriftBooks® logo are registered trademarks of Thrift Books Global, LLC