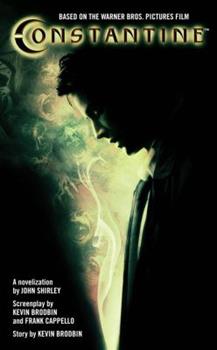 Expelling a demon from a little girl, Constantine senses power at work that he has not felt before. When he teams up with sceptical policewoman Angela Dodson to discover why her twin sister committed suicide, their investigation takes them into a world of demons and angels existing beneath the streets. But the angels are not always on the side of, well, the angels; and both Constantine and Angela have demons of their own. Caught up in a catastrophic...

A Hell Of A Read

Published by Thriftbooks.com User , 16 years ago
I am about halfway through this book since I picked it up today. This is a great read, the pages turn themselves. The movie itself was a bit mediocre but the novelization really takes a so-so story and makes it really good. John Shirley is an engaging and thoughtful writer. Hell is not such a nice place and not since Dante has it been envisioned in a way that is unsettling, gruesome and harrowing. Constantine's trip through Hell is a nail biter. I was a big fan of the Hellblazer Series when it debuted and the book is a worthy addition to that series.

Published by Thriftbooks.com User , 16 years ago
I watched the movie before buying the book and I must say this book is a good accompaniment to the film. As an unreligious reader, my only intention was to judge it on its entertainment value. The descriptions of Hell, angels, and demons were quite vivid and fascinating in my view. Most of all, I enjoyed the storyline and characterization. John Constantine is a world-weary, selfish, and even rude antihero. He sees things that no mortal should see. And worst of all, his friends are hunted and murdered for their association with him. But Constantine is also a desperate protagonist that I sympathized with. He committed a mortal sin as a teenager and has tried for years to win back God's grace. Like he said himself, he's pulled demons out of little girls. Constantine is dying of terminal lung cancer and has very little time left to redeem himself of a seemingly unforgivable act. The dark Constantine isn't someone who cares about what others think... then he runs into LAPD detective, Angela Dodson. The portrayal of the tension, attraction, and reluctance between Constantine and Angela was tasteful and very genuine. Angela is no ordinary person either with strange visions and scarily accurate hunches. She is desperate to seek answers to her sister's apparent suicide. That's when she runs into John Constantine, a cynical man she seemed to have nothing in common with. But they teamed up and together, they quickly discover several disturbing facts surrounding Isabel's (Angela's twin) apparent suicide. With it comes the dark plot of demons trying to cross over, rumours concerning the Spear of Destiny... and Mammon, the son of Satan, seeking assistance in his evil plans. As much as Constantine tries to push Angela away, which occurs several times in the book, he is unable to maintain the distance. For a brief moment, the author writes that Constantine felt sorry he hadn't changed his bed sheets before Angela came over. It was mentioned so quickly, just like a passing thought of the character, that a reader might forget it or discard the information. I'm glad the movie and the book didn't go mushy on the plot, but it's always good to see round characters. The book certainly fleshed things out more and filled in some holes in between scenes and dialogues. I'd recommend it to anyone who is a Constantine fan or just simply looking for an interesting read.

Some folks just don't get it...

Published by Thriftbooks.com User , 16 years ago
As a Methodist Lay Minister, I felt it necessary to correct the above review by "Margaret"... "Constantine" is actually, for the most part, very theologically sound, especially in light of peculiarly Catholic demonology. Sure, it's actually about 75% "dark" Christian theology/demonology and 25% HP Lovecraft occult, but in the end it is certainly *not* Satan who saves the day. The central theme is that of the Reformation itself: You are saved by faith alone, not by works. I imagine many Christians who see or read "Constantine" will be put off by its images of Hell and the damned (which is a theological reality whether you like it or not) and maybe more so by the occult-ish visitations of the living to Hell, but this is a movie, not reality. It at least keeps the central points of Arminian theology intact, and is therefore, in my opinion, a great film for non-Christians to learn a little about the Gospel from.

Published by Thriftbooks.com User , 16 years ago
I followed the John Constantine, Hellblazer comic book series for years. I'd have to say that this novelization of the movie is close to the original. In fact, I now know things about the character that never came out before- things that make sense. John Constantine is a free-lance occultist and paranormal detective in the series. Here is more of a supernatural enforcer- he enforces the Balance between heaven and hell. It is pointed out that angelic and demonic forces are only permitted to influence mankind through hints and suggestions, for man has free will and must be allowed to stand or fall according to his own decisions. Whenever a spirit crosses the boundary to directly control, or harm, then Constantine sends them back- with extreme prejudice. His tool of preference is a "Holy Shotgun".... The thing that keeps this from being just another supernatural slasher story is the metaphysical detail. There are some authentic sources and ideals woven into the story. The ideas actually make you think. For instance, it is stated that God had nothing to do with the making of Hell- it was a co-creation of those spirits and human souls that separated themselves from the presence of God by their own actions. Then there is the concept that the Cosmos runs according to "spiritual physics" incorporated into its very fabric, and not arbitrary religious laws or whim. Or the idea that lost spirits seem so stupid because they cannot think once they have lost the physical body and its physical brain (they never learned to act from the heart and not the head.) Oh yeah, and finally it is pointed out that the only suicides that end up in hell are those who died in despair (not those with a good or noble reason for their actions.) I know that movie novelizations have a reputation for not being that good, but the author of this one has both a Bram Stoker Award and he was coscreenwriter for "The Crow."

When more than your life's at stake.....

Published by Thriftbooks.com User , 16 years ago
The story opens in remote Mexico. Francisco, a homeless man, is told by a friend that there are good pickings in an abandoned church. Oddly, his friend seems afraid of the place and is hanging back letting Francisco do the work. Francisco finds something glittering and pulls an iron spike from the ruins. He kills his way through Mexico go get to LA, where the voices he's started hearing tell him he needs to go. He'll be big in LA, they've promised and Francisco believes. Exorcist John Constantine is dying of lung cancer. Worse, he's going straight to Hell and this is one death Satan himself is going to be attending personally. No hope for a cure, no hope for redemption it's "go straight to Hell and do not pass go." LAPD officer Angela picks a serial killer from a crowd and shoots him before he hurts someone else. This is not the first time she's sensed an apparently innocent man is a perp. Her fellow officers are giving her a wide berth. Then, she dreams her twin sister Isabel is dead by suicide and wakes up to learn the dream's come true. Angela goes to John Constantine for help. She's certain her sister didn't commit suicide. Between the two of them, they uncover a plot that Satan's son Mammon has decided to take over the earth and thus shift the "Balance" that God and Satan have operated under with such care. The key to this is the blood of a psychic (Isabel or Angela) and the spear that pierced Christ's side---which Francisco is carrying. I read the book in one sitting and would have been happy for more. John Shirley keeps the pace going nonstop. His characters are real, some likeable some scary as well---Hell... I don't usually like novelizations, but this concept intrigued me and I'm definitely glad I read this book. It's an excellent read for fans of horror and dark sci fi. NOTE: I read the book before I saw the movie. I think they're both great. There are very few enhancements to the movie from the book and I think every touch has improved the visual impact of the story. I like the movie so much I am planning to see it again and will definitely buy the DVD when it comes out.
Copyright © 2020 Thriftbooks.com Terms of Use | Privacy Policy | Do Not Sell My Personal Information | Accessibility Statement
ThriftBooks® and the ThriftBooks® logo are registered trademarks of Thrift Books Global, LLC