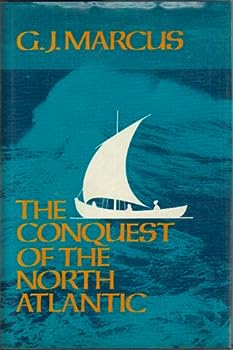 The Conquest of the North Atlantic

The early voyages into the deep waters of the Atlantic rank among the greatest feats of exploration. In tiny, apparently fragile vessels the Irish monks searched for desolate places in the ocean in... This description may be from another edition of this product.

A new look at Viking and English explorations

Published by Thriftbooks.com User , 15 years ago
Eminent British naval historian Geoffrey Marcus gives us a new look at pre Columbian Viking and British exploration in the North Atlantic area. He provides us much additional information on the Viking discoveries and settlements in Iceland and Greenland. Also, he adds useful data on early Irish and Viking ship construction. Marcus provides evidence that the first European to sight, though not land on, the North American continent was Bjarni Herjolfsson, not Leif Eiriksson. Readers interested in this little discussed period of history should not miss this important study.
Trustpilot
Copyright © 2022 Thriftbooks.com Terms of Use | Privacy Policy | Do Not Sell My Personal Information | Cookie Preferences | Accessibility Statement
ThriftBooks® and the ThriftBooks® logo are registered trademarks of Thrift Books Global, LLC