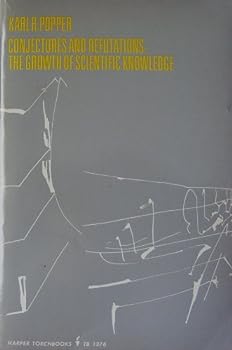 Conjectures and Refutations is one of Karl Popper's most wide-ranging and popular works, notable not only for its acute insights into the way scientific knowledge grows, but also for applying those insights to politics and to history. It provides one of the clearest and most accessible statements of the fundamental idea that guided his work: not only our knowledge, but our aims and our standards, grow through an unending process of trial and error...

Published by Thriftbooks.com User , 14 years ago
This is Popper at his mature full authoritive best. This work connects his early classic on Open Society with the works of contemporary philosiphers as well as with the Greeks. Popper makes the connection with modern science and it's foundations from the ancients. Anyone how has failed to avail themselves of Poppers insights into knowing and learning is the poorer for it.

Published by Thriftbooks.com User , 16 years ago
We guess. We make up a story that explains the phenomena we observe. Why is there night and day? Because the sun rises from the east and sets itself down in the west. Aha! Let's check that. Let's go east. After a while we realize that we're living on a sphere and so we know our story is wrong. The sun does not rise up and set. So what does it do? We're on a ball and the sun is above and it moves around us! Great! Problem solved. But wait! Let's check that. The stars also move. Let's plot their course, and then... and so on and so forth. For Popper, this is how we've built up our picture of the world. We make bold conjectures to explain what we see see and then we check, or rather we establish a failure test. If the test is true, then our guess is false. But if we only test to see if a guess is false, rather than to try and prove that it's true, then how do we know our guess is true? Popper answers that we do not and cannot ever know that. Knowledge lies beyond our grasp, we can only seek knowledge without ever hoping to attain it. This is the central theme of Conjectures and Refutations, which itself is a comprehensive overview of Popper's epistemological thought. The book is divided in two parts titled, you guessed it, I-Conjectures and II-Refutations. Part I, Conjectures, comprises the first ten chapters. Popper begins with an overview of his thesis, then explores the nature of the problems that face people who think about the world and who act in it (chapter 2), he presents three other views of what we mean by knowledge (ch. 3), he describes tradition and the history of thought (chapters 4 to 6) and then turns to a critique of Kant, and of the effect that Newton's astonishingly successful theory of gravity, unrefuted for over 200 years, had on the development of western science (chapter 7). Popper then closes part I with discussions on what the difference is between science and metaphysics, on why mathematics works so well in describing the world, and finally on the nature of scientific knowledge, i.e. what do we mean by "knowledge". In part II, Refutations, Popper does not present anything, he destroys existing theories which he feels are wrong. He returns to metaphysics and because it deals in existential statements that are irrefutable (e.g. you can't prove the Devil's existence or non-existence) he seeks to separate its pursuits from that of science. Science deals only in refutable statements. Then Popper attacks other theories and problems. He gives a succinct summary of his attack on historicism, his name for the belief that History follows laws (e.g. Marxism) and that historians should be able to predict the future course of mankind. In short, Conjectures and Refutations is a complete introduction to Popper's thinking. It sketches out all his thoughts on the social sciences and describes in fair detail his thinking on the development of science. He ends on a positive note. It may seem depressing that we can never obtain true knowl

Published by Thriftbooks.com User , 16 years ago
This book is divided into two sections - "Conjectures" and "Refutations". Roughly, or not so roughly, these titles refer to the basic aim of the essays divided under them. Moreover, the process of conjecture and refutation is itself the primary theory threading these various essays together. The first division consists of Popper's own conjectures about the nature of scientific method, human knowledge, the nature of metaphysics, a theory of tradition, etc. The latter section: refutations of commonly held theories on the mind-body problem, the demarcation between science and metaphysics, language, and social philosophy. In this Routledge Classics edition there is a third section of addenda pertaining to just a few of the individual essays in the text. For those who are unfamiliar Popper Conjectures and Refutations is probably one of the best ways to get to know him. Being a collection of essays originally published elsewhere, they are on varied themes. These themes are often inspired by a conference or publication, but despite the occasional aspect of these writings they all generally further the the falsifiability thesis of scientific theories. For Popper, this means that all theories, though they can not be "proved" by "experience" or "observation", that is empirically, they can be falsified by empirical means. This is the truly empirical nature of scientific thought and the scientific method. This empirical-ness of theories (or statements) is what makes them scientific. Unlike the early positivists argued, the empirical nature of the scientific method is not its ability to establish universal laws by the appeal to experience and the use of inductive reasoning. The appeal to observation and experience work to corroborate theoretical claims, but can never "prove" a theory once and for all. Along the same lines, Popper's demarcation between science and metaphysics figures heavily in these essays. While science consists of testable theories/statements to be corroborated or falsified by experience, metaphysics is constituted by un-testable, non-falsifiable theories/statements. The un-testable, un-observable nature of metaphysical statements does not make them meaningless as Wittgenstein, Ayer, and others have argued - a universal claim about the nature of gravity is no way more meaningful - it simply makes them untestable, unfalsifiable, and unscientific. The philosophy of science and scientific method are not all that is important to Popper. They do not even exhaust the topics discussed in this book. I could write (and have written elsewhere) pages and pages on Popper's polical philosophy, his critiques of historicism and scienticism, and his epistemology. If you want a proper introduction buy Conjectures and Refutations. You might want to consider his Poverty of Historicism as well.

Published by Thriftbooks.com User , 19 years ago
This collection was first published in 1963. It includes a number of seminal papers which were delivered as talks to bodies such as the British Rationalist (Humanist) Association and the Mont Pelerin Society. There is also Popper's first paper written in English "What is Dialectic", delivered at a seminar in 1937 soon after he arrived in New Zealand. Possibly the most important offering is the Introduction "On the Sources of Knowledge and of Ignorance" which explored the common roots of authoritarian thinking in western epistemology and politics. In each case the fundamental issues have been skewed by asking the wrong questions: "What is the authority for our beliefs?" And "Who should rule?" Thus attention has focused on unanswerable questions in both epistemology and politics, diverting attention from the real and practical issues of criticism in epistemology and the limitation and control of power in politics and public administration. This paper also prompted William W Bartley's seminal thinking on rationality and the limits of criticism."The Nature of Philosophical Problems and their Roots in Science" suggested that the prima facie method of teaching philosophy denied access to the roots of philosophical problems and produced students who are either narrowly specialized in technical fields or are trained to reproduce material recycled form their teachers. He suggested that philosophy would die if its extra-philosophical roots decayed and he backed his case with a sketch of Plato's response to the crisis in early Greek atomism and the more modern example of Kant's response to Newton. This essay produced an echo in the form of Agassi's subsequent paper on the roots of scientific problems in metaphysics.On the topic of metaphysics, this collection contains Popper's "coming out" as a metaphysician in "On the Status of Science and of Metaphysics", heralding a development that culminated in the Metaphysical Epilogue to "The Postscript to The Logic of Scientific Discovery". "Back to the Presocratics" was delivered to the Aristotelian Society in 1958, an occasion that has been immortalised by Byran Magee in his memoires. He described the paper as a fundamental challenge to the ruling doctrines of empiricism but the assembled multitude missed this point and devoted the discussion time to fine points of disagreement with Popper's reading of his Greek sources.

No student of any science can do without this book

Published by Thriftbooks.com User , 24 years ago
Nothing is the same for a student after this book. It helps you understand what can be called and what can't be called "scientific" and the sometimes, narrow line between. This is the one of the most thought-provoking books of the XXth. century. It started one of the most interesting discussions of the history of ideas. Re-read it if you read it, or discover it if you missed it.
Copyright © 2020 Thriftbooks.com Terms of Use | Privacy Policy | Do Not Sell My Personal Information | Accessibility Statement
ThriftBooks® and the ThriftBooks® logo are registered trademarks of Thrift Books Global, LLC