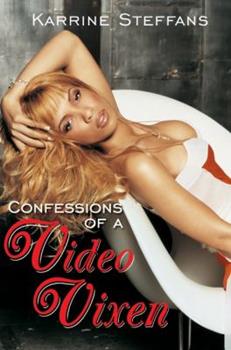 Confessions of a Video Vixen

Part tell-all, part cautionary tale, this emotionally charged memoir from a former video vixen nicknamed 'Superhead' goes beyond the glamour of celebrity to reveal the inner workings of the hip-hop dancer industry--from the physical and emotional abuse that's rampant in the industry, and which marked her own life--to the excessive use of drugs, sex and bling. Once the sought-after video girl, this sexy siren has helped multi-platinum artists, such...

Published by Keemdiddy , 2 years ago
Slightly disturbing at times due to the extreme nature of the book but it is very interesting and has more than enough gossip to keep people glued to this book. I read it in only a few short days. Enjoyed just about all of it. The book was also in great condition.

Published by Thriftbooks.com User , 16 years ago
I bought the book in an airport bookstore in Los Angeles and had read three-fourths of it before landing in New Jersey. I marveled at how damaged Karrine's self-esteem was, and I kept reading with the hopes that she had learned from her mistakes. Unfortunately, each chapter listed more and more sexual encounters and abuse. As I finished the book, I really did not have a strong sense that she has learned from her mistakes. In one of the last chapters, she talks about her affair in 2004 with Usher, after she said that she had learned her lesson. I don't get the sense that Karrine knows how to say no to sex or men. At no point near the end of the book did I get the sense that she would never use drugs or sex again if the opportunity for excitement presented itself. Karrine is a sex addict, plain and simple. The book is eye opening because for those of us who have not subjected ourselves to such abuse, the book illustrates how men dangle money, jewelry, and other material items before beautiful women in order to get favors and throw them away. It was disappointing to see how so many male celebrities that I thought were above such behavior were living this kind of life and had no respect for women. If Karrine does not have any STDs, she is blessed. I can't imagine how she could have avoided it, when she admitted that she did not use protection most of the time. Karrine calls this book a cautionary tale, but I can't help but imagine that some young girls will be inspired to pursue the kind of life she lead. She clearly illustrates the negative aspects, but sometimes the perks and celebrity overshadow them.

Published by Thriftbooks.com User , 17 years ago
Confessions of a Video Vixen was a really good read. I believe that it will shine light on many issues that young women are faced with in relation to their self-esteem. Karrine really allowed us to go deep into the mind of an abused girl, teenager and woman. The book allows you to follow the destructible path that her experiences led her down, and as a result it might serve as a prevention to other younger girls in similar situations. I do feel like Karrine held back on many of the things that she did wrong. I know she had and extremely terrible life but I feel she always pointed out others faults and wrong doings and failed to always highlight her own. When she did name the things she did wrong I feel like she always found a way to justify or excuse her actions. Another thing that bothered me is the fact that she says that all of the things she did was out of love for her son but she disregarded him in many instances. The fact that she went months for many occasions without seeing him made me feel like her actions were out of selfishness and greed than out of support for her son. When she did have the money and resources to be a good parent those were the times that she deserted him the most. I really have a hard time believing that she really learned her lesson. Her actions and the things that she was saying in the end of the book just didn't seem to coincide. That really made me feel as thought the book was another cry for attention and for publicity and money. Essentially she said that she still does the same things but just does them from a different perspective. Because she has truly learned her lesson it makes me question her motives for writing the book (even though I thoroughly enjoyed it). It's definitely a good read. I would highly recommend it!

Thankful for my life

Published by Thriftbooks.com User , 17 years ago
As sad as this book left me feeling, I truly believe that this woman has not learned from her mistakes. All the men she thought she loved were never there for her when we needed them the most, but yet she still went back to some of them. I wanted so much for her to tell off Ja Rule and Irv Gotti, and off course Diddy. These men treated her like dirt and there was nothing she could do about it. I hope young girls could learn from this woman's mistakes and abusive lifestyle.

Published by Thriftbooks.com User , 17 years ago
This book gives you an inside look in to the less than glamorous hip hop world, that is often portrayed in music videos. Karrine's background kinda gives you an idea of why she made the choices she made when it came to her numerous failed relationships. The book is interesting enough to keep you reading and was definetly worth it because she's not shy about naming names. I'm already waiting for the movie version to come out. BUY IT!!!!!!!!!!!! You will not be dissapointed.
Trustpilot
Copyright © 2022 Thriftbooks.com Terms of Use | Privacy Policy | Do Not Sell or Share My Personal Information | Accessibility Statement
ThriftBooks® and the ThriftBooks® logo are registered trademarks of Thrift Books Global, LLC